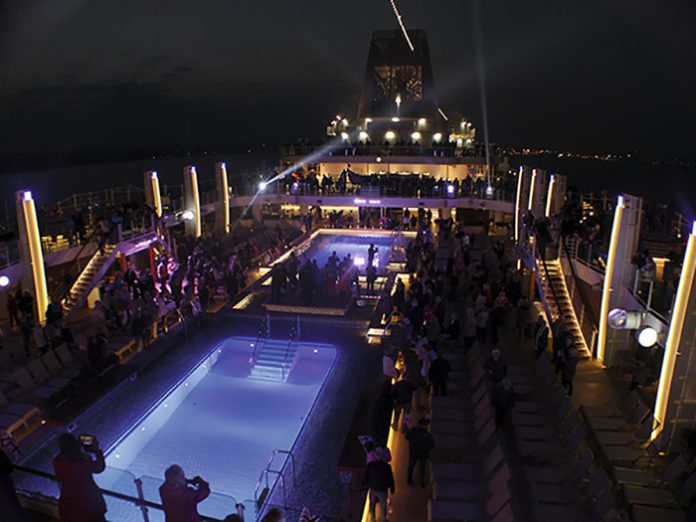 The Britannia P&O cruise liner began its journey in mid-2011 when the MBLD team joined interior designers Richmond International to change the face of cruise ship design. P&0 presented a brief which challenged us to develop a completely fresh and contemporary approach, which would, at the date of launching in March 2015, be introduced on Britain’s largest cruise ship.

As well as a new aesthetic, energy consumption was at the top of P&O’s priorities. With this in mind, the use of LEDs to reduce energy connsumption compared with traditionally used halogen sources was, from the outset, a goal which we worked hard to achieve, given the added issues of vibration and unstable power when using LEDs on a ship.

From the outset, we were required to meet targets for each of the public areas, in terms of loading and dimming circuits. Based on experiences from other ships’ use of halogen downlights, we felt confident it could reduce the ships loading. By turning the ship into a fully LED lit scheme the energy consumption was reduced to a third or less of its normal running requirements. This, along with our approach to luxury hospitality lighting – whereby lighting is selective and sensitive to each area – has seen significant improvements to the energy demand on the ship.

While ship specification and stringent space-by-space requirements provided benefits in some aspects, it took away from others in terms of the limited number of circuits allowed within each space. This meant that we had to work hard to achieve the balance of lighting within each space; a task that proved challenging in areas such as large scale restaurants or zones that consisted of mixed use spaces, yet shared limited circuitry.

Working closely with the lighting manufacturers, we selected products and LED chips that ensured consistency in the quality of light and colour temperatures across the range of 130 lighting products installed. Public area lighting was supplied by Ensto Italia and Cabins by iVela, Italian manufacturers that have had many years experience working with the Italian shipyard Fincantieri.

The aim was to develop a range of products that would allow the least amount of variations for difficulties faced in maintaining lighting whilst at sea and provide the best design pallet to cover all aspects of the wide range of spaces across the ship. Catering for 3,600 passengers, across fifteen passenger decks, the 1,082ft ships consists of thirteen bars, thirteen restaurants and cafes, a spa, theatre, TV studio, dance hall, specialist cookery school and pool decks. At the heart of it all is the atrium – comprised of celebrity bars, delis and the focal lighting installation called the Starburst – the concept of Richmond International, developed by Jona Hoad Design. The Starburst, made up of 300 illuminated shards and 200 hand finished triangular facets, creates a spectacular centrepiece that elegantly explodes and drops seven metres from the ceiling, floating above the lower deck.

Working together with Jona Hoad Design, we developed a lighting narrative that created a dynamic and adaptable lighting sculpture. The piece is programmed with eight lighting scenes that utilise the 580 individual 2W LEDs within each of the acrylic shards over 72 DMX channels and eighteen Lumenbeam RGBW floodlights focused onto the Starburst.

The welcoming scene is of gently pulsing shards combined with floodlighting of red, white and blue, creating a ceremonious Union Jack like arrival onto the Britannia. The day-to-day scene works with the ship’s clock, displaying a warm golden colour in the morning through to a darker moody aubergine colour in the evening, with an on-the-hour light explosion, when the shards chase up the Starburst and sparkle across the ceiling.

With the Starburst providing a statement attraction, the lighting within the rest of the three-storey high space was carefully balanced to provide the ground floor seating area with a vibrant and comfortable setting. The surrounding levels include four individual bars across two floors, a retail floor and another central feature at a spiral staircase with individually lit acrylic balustrade rods. Other striking areas include Olly Smith’s The Glasshouse on deck seven, sparkling with four glass chandeliers and backlit bar counter.

Lighting played an important role in continuing the experience through transitional spaces. Scene-setting between night club venue to signature restaurant, retail units and spa required the balance of light which one would expect.

The Lime Light Lounge – where entertainers such as Jaki Graham and Kiki Dee performed in a laidback jazz club atmosphere – features a central lighting feature providing an adaptable and attractive detail within the otherwise low key lighting. The 150 programmable LEDs, with four different coloured handmade amber glass diffusers linked to a DMX system, were set to slowly ripple across the ceiling during dining followed by a more dynamic effect during the late evening setting. All of which links back to the entertainment AMX control system to adapt to the flexible performance space.

The rest of the lighting is muted with selective gimbal downlighting to tables, highlights from golden pendants and pin spots to provide sparkle from the feature wall glass beading details creating an opulent and atmospheric dining and entertainment space.

At the other end of the scale, a large theatre, one of P&Os largest and advanced venues to date, features full video wall mapping. With a contemporary take on traditional theatre design, specially developed adjustable high power LED downlights ranging from wide to narrow beams were integrated within ceiling trough details, splaying out in a radial arrangement across the ceiling rafts to provide the house lighting.

On the other hand, wall panelling details lended themselves to a linear framing detail completed with uplighting to a central copper panel, creating the perfect low level ambiance for show settings.

Special areas for the cruise liner include the Open Decks and the new James Martin cookery school. The Open Decks were considered as a place for entertainment lighting to take control during the hours of darkness. We were briefed to develop this, working in harmony with the entertainment lighting to create an extra special night time venue. Lighting control for the first time was seen as a vital part of this area although limitations were to be considered within the ship specification. With this in mind, we set about selectively integrating feature lighting within architectural elements, such as the pool edge, planters and large scale pylons which house entertainment speakers and moving head projectors.

The scenes set for the different areas include: a brighter and radiant surrounding for the terrace pool, more intimate and relaxing setting for the serenity pool and bar and a golden and vivid lighting scheme to highlight the entire perimeter of the lido pool. One of our lighting designers, Arianna Ghezzi, commented: “Our intention was to bring a Miami Beach pool party feeling to the Britannia poolside, creating a glamorous experience for the guests, supporting with our different lighting settings the various events the entertainment has scheduled.”

The cookery school, which was to be offered as a working professional kitchen for small classes of people learning from chefs, had the function of a private dining space open to the kitchen added. Lighting within the kitchen area had to meet lighting requirements of a working kitchen whilst forming the backdrop when not in use for the dining area, with the head chef table set as a part of theatre for the on-looking diners.

After four intensive years the day came for the MBLD team – Laura Mackay and Arianna Ghezzi, along with support from Rebecca Hines, Rob Honeywill and two Helvar technicians – to prepare for the final commissioning. After spending one week in the shipyard and one week at sea from Monfalcone to Southampton the ship was launched by Her Royal Highness the Queen at a grand ceremony in Southampton dock where the Britannia was successfully named in full glory of red, white and blue, christened with Wiston Estate English Sparking wine specially selected for the occasion.