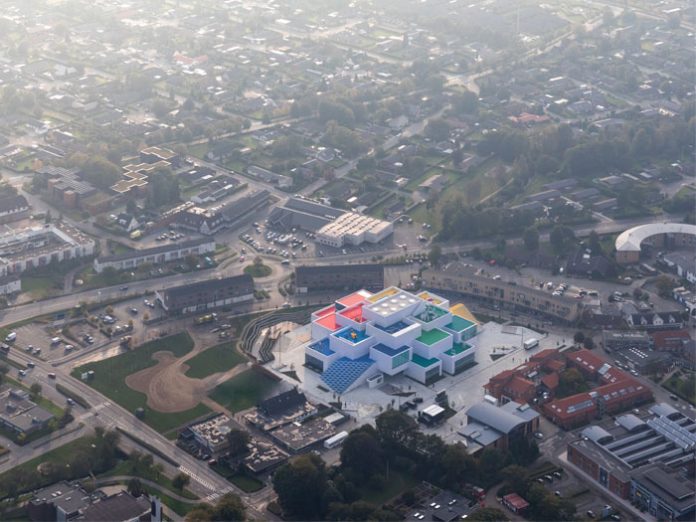 The Lego House has become an iconic landmark, not just for the city of Billund but for Denmark as a whole. We sat down with Jesper Kongshaug, lighting designer for the project, to discuss the way that lighting helps to showcase the exhibits inside.

As children, we all played with Lego, building houses, towers, and all manner of imaginative architectural creations with the colourful bricks. The Lego House in Billund, Denmark, designed by BIG (Bjarke Ingels Group) Architects, sees this childlike imagination brought to life.

With an architectural concept that is the manifestation of Lego itself, founded in Billund by Ole Kirk Christiansen in 1932, the Lego House consists of 21 ‘bricks’ stacked together to form an irregular pyramid. The façade of the building has been designed to look as though each of the 21 ‘bricks’ has itself been constructed out of Lego.

A special brick, entitled the ‘Keystone’, tops the structure. Designed to match the dimensions of a traditional 2×4 Lego piece, the Keystone features eight skylights, intended to correspond to the buds seen on such a block.

Built around a 2,000sqm, publicly accessible space called Lego Square, the Lego House features a number of outdoor roof terraces and two separate outdoor amphitheatres, with seating generated from the gradual sloped pixelation of two of the building’s main ‘bricks’. Intended to be a city space, open to both visitors and the general public, Lego Square has no visible pillars, while daylight and the sun’s rays pass through cracks and gaps between each structure, filling it with light.

Inside, the building houses three restaurants, a Lego store and an auditorium on the ground floor. The heart of the centre though comes in the Experience Zones, which host four brightly coloured play areas, alongside a large gallery of Lego models, and a special exhibition showcasing the legendary toy brand’s development history, including 500 of the most iconic Lego boxes produced.

The ‘Keystone’ houses the Masterpiece Gallery – a bridge between all corners of the exhibition, it also serves as a sky-lit gallery for Lego as an art form.

Copenhagen-based Jesper Kongshaug Lighting Design developed the lighting for this remarkable structure, working alongside BIG, as well as Lego’s own design team, to create a precise, yet subtle lighting scheme.

“I tried to find a balance between lighting quality and lighting precision,” said Kongshaug. “But it should not be a building where you think about the lighting. You should have a really high quality experience without knowing or thinking about how much effort was put into it.”

Although the lighting is intended to appear effortless throughout, a lot of technical preparation went into creating the right ambience for each exhibition.

“If you look at it as a normal guest, you perhaps don’t realise that everything has been customised for that particular role, but it was necessary because we have some quite strong differences in each room’s characteristics.”

A key part of this differentiated lighting came in the adjusted colour temperatures. Although white light was used throughout, it was shifted slightly from 3000K in the activity and exhibition spaces, and 4000K in the navigation routes.

By lowering the colour temperature slightly for the exhibition spaces, it means that the bright colours of the Lego bricks are properly reproduced. Kongshaug also worked to consciously avoid glare, and to get the right balance of shadows depending on each space’s function.

“When there are activities with bricks, we have made sure that there is a soft shadow,” he said. “We achieve this by adjusting at least three spots indirectly down towards the tables without dazzling. Where the visitors stand or walk, we have created a very vertical light, which also does not dazzle, but it increases accessibility and security.”

Another important factor for Kongshaug to consider was how to illuminate the various interactive areas situated throughout the Lego House. These areas use video projections and scanning cameras, and as such the wrong kind of lighting would have caused interference, blurring the video projections and preventing the scanners from recognising Lego figures, as intended.

“We had to make sure that there was a very good transition between the exhibition spaces and these media-based areas where the cameras and digital projectors take over,” Kongshaug said. “To counteract waste light and glare, we used black honeycomb grids within the luminaires.”

To create this precise lighting, Kongshaug called on his previous experience working in theatre lighting. “Precision is crucial in a theatrical space, and that was the case here too, as it was crucial to precisely direct the light.”

Although Kongshaug had to be very precise when directing the lighting throughout the Lego House, this task was made much more difficult by the fact that none of the exhibitions were in place when the lighting was being installed. “All the lighting was put up and focused and pointed in completely empty rooms,” he said. “It was quite an awkward situation, but we could not come in with the lifts and ladders and everything after all the exhibits had been put in place.” As such, Kongshaug and his team spent several weeks calculating and placing the luminaires according to drawings of the exhibitions.

“I could tell that the lighting was coming out successfully even when there was no exhibition installed yet, because I could put my hand in the space where I knew the experiences would be and see that it was all working out fine.”

While the majority of the Lego House features relatively uniform lighting, if alternating slightly in colour temperature, there were a few areas that needed a more dynamic lighting scheme. The World Explorer exhibit, for instance, features lighting that changes throughout the day from morning, to daytime to night. “We linked this to all kinds of things, lighting in the houses and trains, in the models and so on, and we had to get the lighting to change in the same rhythm,” Kongshaug said.

The building uses a DALI 2.0 control system, and Kongshaug said that using this, rather than the preferred DMX system, offered up an interesting new challenge. “We wanted to challenge the manufacturers to give us a spot that would do a precise colour programming with precise timing that wasn’t done by DMX,” he said. This control system was also utilised to illuminate the Tree of Creativity, a 50-foot structure that stands in the middle of the building, and is illuminated with a number of small RGBW LED spots.

“We had some challenges to make the DALI control work in a good an effortless way, but after a few adjustments we were able to develop a very strong tool. Normally we would have used DMX but it was a great advantage that we could use the same protocol that is used in the rest of the building.”

Kongshaug predominately opted for Targetti spots throughout the Lego House, after being put in touch with the Italian manufacturers through a local distributor.

Recessed fixtures from Targetti’s CCTLED Architectural range, alongside Ledo projectors equipped with different optical systems and beam openings meet the various requirements that Kongshaug had for the lighting, as they were used to control the play of light, shade and colour. The spots were given a special finish, requested by Lego, in order to blend into the ceiling. Elsewhere, Kongshaug also made use of spots from Erco and LTS.

Because of the building’s staggered brick structure, and the installation of skylights in several of the exhibition rooms, the space is filled with natural daylight. The recurring use of white walls throughout add to a visually serene background, so as not to draw attention away from the vibrant colours of the Lego models on display. Daylight and shadow calculations were also made, with filters installed on some windows to control the amount of light that enters, so that it does not conflict with the exhibitions inside.

Since completing work on the Lego House, Kongshaug has gone on to work on the new Olympic Headquarters in Lausanne, Switzerland – a project that he won the competition for halfway through his involvement with the Lego House.

And he said that the experience of working on such a high-profile project has only helped him.

“It definitely was a learning process to be involved with a big international organisation,” he said. “I won the competition for the new headquarters partly because I had learned how to work on high scale projects like that, and I’ve used a lot of the things that I learned during the Lego House.”

Kongshaug added that it was a particularly exciting opportunity to work on such a project in his home country. “Being from a small country, you don’t get that many projects domestically, I normally have to go abroad, so it was good to get it.”

Throughout the Lego House, the lighting is blended seamlessly into the fabric of the building, complementing the striking architecture perfectly. In keeping with Kongshaug’s initial aim for the building to be a space where you don’t think about the lighting, he said that such a level of integration is “a fantastic reward when you think about it”, and he is delighted with how it has turned out.

“It was a complex solution in a complex building, where the lighting is quite low profile. BIG has been very happy with the lighting, and I would say that I’m very pleased.

“It’s something that I can look back on and think that we pulled this one off.”