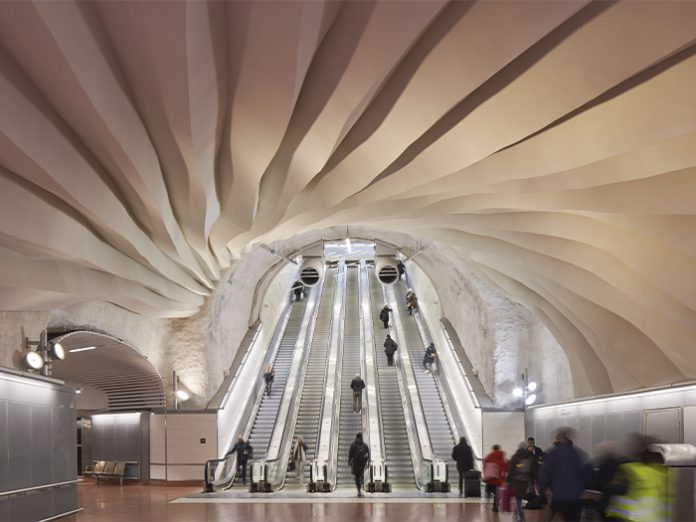 The recently completed Citybanan is a new commuter railway tunnel running beneath the city of Stockholm. Running 7.4 kilometres in length, the Citybanan is a vital project for the long-term rail development in the city, and for the creation of an efficient public transport system that meets city requirements.

The system, used by Stockholm Commuter Rail, has greatly improved travel into and out of the city through its two stations; Odenplan and City Station. The City Station is located under Stockholm Central Station and the Metro lines passing through T-Centralen.

City Station, designed by Ahlqvist and Almqvist Architects, features lighting designed by WSP Sweden. The design parameters surrounding the lighting mainly consisted of creating a facility with robust, maintenance-friendly solutions, with lighting design that creates a good visual guidance, while creating interest and intrigue in the various rooms of the station, adding a feeling of character while improving the orientation around the station.

Staffan Abrahamsson, one of the lighting designers at WSP that worked closely with the architects from the initial concept stage, collaborating with them to create a cohesive lighting scheme that harmonises with the surrounding architecture.

A primary factor in this harmonised approach was the way in which lighting was seamlessly integrated into the fabric of the building – something that was discussed with the architects at the initial concept stage. “Most of the stations here in Stockholm are very old and very technical, they don’t hide the construction and the luminaires that well,” said Abrahamsson.

“In the early stages, there was a thought that this should have more of an approach of an airport than a train station. So we worked with different kinds of ceilings, and integrated the luminaires and so on to get a more exclusive feeling compared to other stations nearby.”

However, while there was an ambition to create something new and unique for the Citybanan, Abrahamsson said that, because of the regulations set by the Swedish Transport Administration, there were some limitations to what they could do when it came to lighting.

“We had a great deal of restrictions. First of all, all the luminaires had to be at least IP65 rated, and when you’re trying to find suitable luminaires, you don’t have as many to look at when it has to be IP65.

“But it was a very technical project, and we had lots of discussions regarding maintenance, and about lux levels. There were precise restrictions regarding the lux levels in different areas. In the escalators, for example, the first and last steps had to be highlighted with a certain light level, and the colour temperature had to be 4000K in all areas.”

Such limitations meant that WSP had to rethink a number of lighting scenarios that were planned for the station. “From the beginning, there was an idea to have different colour temperatures to underline the movement from when you come down into the station,” Abrahamsson explained.

“It was meant to be a cooler light temperature at the surface, when you had more contact with natural light, and then a warmer light when you descend further down into the station. It was intended to create a visual effect, where visitors could psychologically find the cooler light temperature closer to the surface, but the client didn’t want to have different areas with different colour temperatures at that point.”

Despite these restrictions regarding colour temperature, there are areas where more flexibility was allowed, thanks to the inclusion of a series of art installations.

The appearance of artwork is a common occurrence in underground stations throughout Stockholm – since 1957 artists have played a key role in the design of new stations in the city, while older stations have also been adorned with new statues, murals and installations over time.

The City Station is no exception, and WSP worked with several of the artists whose work is featured in the station. “There were some artworks that didn’t have any special lighting – they consisted of other things like screens, or they just made patterns on the wall – but for others, we worked very closely with the artists from the beginning. We had discussions with each of them at an early stage, and we conducted tests, made 3D renderings and so on, working our way forward from there.”

Alongside the many artworks on display, the station features a unique, swirling ceiling detail in the approach to the main escalators. The detail creates a sense of movement from above, accentuating the feeling of transportation as passengers enter and exit the station.

Again, WSP were involved with this from an early stage, and as Abrahamsson explained, they had some clear ideas in mind for the lighting design. “The thought was to have a cooler light on one side, and a warmer light on the other, so that you get the shapes in the ceiling with a different colour temperature on either side.

“We wanted to highlight the structure, to underline the movement in the ceiling – so we worked with the designer of the ceiling to do this. We created a 3D model of the ceiling, and made some renderings so that we could figure out the positions of the luminaires.”

Elsewhere, the lighting on the station platforms consisted of integrated Hoffmeister downlights in the ceiling, used in combination with Norka’s linear Brunn luminaires among the platform edges, while the ceiling is also illuminated through Lumenpulse’s Lumenfacade RGBW luminaires.

The lighting nearest to the platform is dynamic, with spotlights illuminating rock walls encased behind glass when no train is in, which serves to show and clarify the entire size of the room. When a train arrives at the station, these spotlights are dimmed down, and narrow-beamed downlights light up the floor area at the glass doors, alerting travellers to the presence of an incoming train.

“We tried to change the way of lighting the station in different areas,” explained Abrahamsson. “In some areas we have normal, direct lighting with recessed luminaires in the ceiling, and in some cases we also have light tubes that illuminate the wall, while in other areas we have backlit glass.

“These were the three main components that we worked with, and we tried to change these as you move through the station to different areas. For example, the backlit glass was good to have at the end of a long corridor to visualise and highlight the end of the corridor, and the change of direction and so on, while the artworks also act as a guidance in this system of tunnels and escalators.”

Completed in 2017, WSP’s involvement in the Citybanan project began back in 2009, and Abrahamsson added that the length of the project did, at times, complicate proceedings.

“When we started planning it in the beginning, we used very few LED luminaires – only some spotlights and downlights were LED, but even then, they were a very early type of LED luminaire.

“It was a very technical, complex project, and because it ran on for such a long time, we had to change our initial choices to LED luminaires at quite a late stage, so in some cases it was hard to make it work with our initial thoughts.”

However, Abrahamsson concluded that despite the challenges that he encountered during the life of the project, he is very satisfied with the outcome. “I think the end result is good, and the client was pleased,” he said.

“I think that what we were talking about initially, that it should have more of an airport feeling than that of a train station, I think that works really well.”

Indeed, by being involved from such an early stage, WSP were able to create an interesting, striking lighting scheme that expertly blends into the unique architecture of the City Station, helping to create a pleasant, welcoming atmosphere for Stockholm’s commuters.