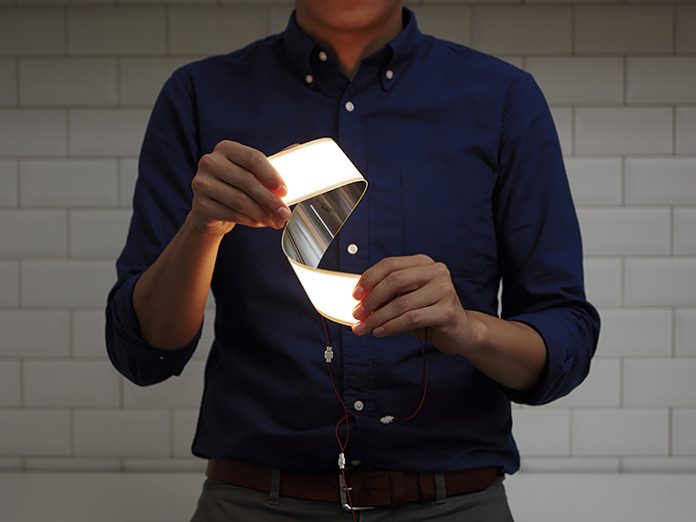 In the six years since I last reviewed OLEDs it is surprising how little has really changed in terms of applications or usage for this technology in general lighting.

In 2010 the general feeling was that OLED was an interesting novelty technology looking for a suitable application.  Presentations from leading lighting designers at industry events showed stills from Kubrick’s film 2001: A Space Odyssey of illuminated floors and ceilings as an ideal OLED application, while other designers showed exactly the same images as being the kind of application to avoid at all costs.

Ingo Maurer, Philippe Starck and many other design superstars were recruited to develop interesting luminaires based on OLED.  Apparently Philippe Starck found the quality of light from OLED panels to be boring and the technology incomprehensible. The general conclusion was that the light quality from OLED panels was very flat, fog like and not very exciting but if it could be produced cheaply enough then it might stand a chance in the office lighting market.

While most of the early manufacturers of OLED materials for lighting applications, including Philips, have now withdrawn from the market, given up making panels and shut down or sold off their pilot production facilities, the Korean based LG corporation have gone in the reverse direction and are still putting considerable effort into development and persuading us to use their products.

LG Display took over the OLED development from its sister company LG Chem in 2015, and are currently marketing a variety of shapes and sizes of rigid and flexible panels for lighting applications. LG Display is the world’s largest LCD panel maker and produces display components and systems for TVs, mobile phones and other digital devices. At one point Philips was a major investor in the company but has now sold its shares.

The most impressive applications for curved OLEDs to date are in big screen curved TVs including the LG 3D 4k Ultra HD 65”.  This application is definitely a very good use of flexible OLED sheet and I assume this generates the investment required for products to be used in lighting applications.

Back in the world of lighting, the most interesting novelties shown on the LG Display booth at Light + Building in Frankfurt this March were the flexible OLED sheets. At the moment the two sizes available are 200mm x 50mm and 406mm x 50mm but prototypes of an impressive 320mm x 320mm flexible sheet were also presented.

The rigid panels are remarkably thin at less than one-mm and the flexible sheet is even thinner at only 0.41mm. Both types give a completely flat and even light output with high CRI of over 90. The surface brightness of the panels is not uncomfortable to view directly so secondary optics or glare control accessories are not required, thus increasing system efficiency. There is no UV in the output and blue levels are much lower than most standard LEDs and similar to those in sunlight. The panels run at a cool 35°C and do not require additional heat sinking.

The efficiency and life of the LG OLED panels has increased significantly compared to the products on offer in 2010. Efficiency, in the range from 50lm/W for the flexible sheet up to 65lm/W for the rigid panels, compare quite well with other LED panel solutions based on side lit or back lit diffusing optics. Lifetime of 30,000 to 40,000 hours to L70 is not as high as other LED technology but is much higher than previous generations of OLEDs.

The obvious applications for OLED fall into a number of areas including: commercial, architectural and decorative lighting.  Ceiling panels for office and commercial lighting is still potentially the largest market for OLED if the size of the panels can be increased to fit a 600mm x 600mm grid system and the efficiency and life expectancy can be further increased. The minimal OLED panel thickness could be an advantage over conventional LED panel designs, possibly allowing ceiling void depths to be reduced but, after allowing for the size of driver and electrical connection components, the thinness of the OLED is probably not the determining factor in the overall luminaire height.

To capture a significant share of this market, the OLED panels will need to be cost competitive with conventional LED panels, which have been widely used over recent years. Unfortunately for OLED manufacturers, the more basic types of LED panel have now become a low cost commodity item so the opportunity in that market has probably disappeared.

There may also be an opportunity to use the flexible sheet material for backlighting materials in high end interior projects where space is very limited. Although lighting designer Graham Rollins of LDI pointed out the sparkle given by flexible LED sheet, incorporating individual LEDs can add attractive sparkle when backlighting decorative glass materials whereas the OLED panel would give a flatter lit effect.

Beyond these potential larger volume commercial and project applications, there is also a wide variety of uses in high end decorative and custom luminaire designs where the various shapes and sizes of flat LG panels and the curved sheet material opens up new design possibilities. Not having to worry about heat sinking or developing diffuser optics for luminaires produced in low volumes will be a significant advantage.

The reference OLED designs that LG showed at Light + Building earlier this year, including pendants and task lights, went some way towards demonstrating the potential of their technology and it will be interesting to see if, after a number of false dawns, the time is now right for OLEDs to be adopted in both niche and larger lighting applications.