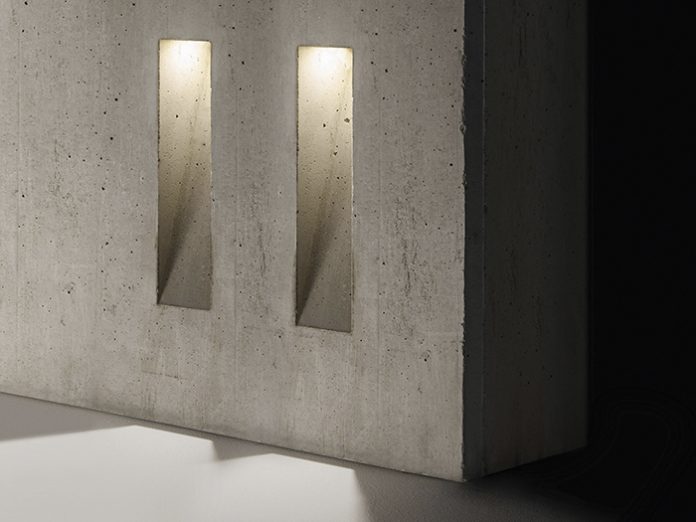 Light has become remarkably ‘heavy’ in recent years with the growing use of cast concrete to manufacture luminaires of all types including some seemingly unlikely products such as pendants. The process of casting concrete dates from the Roman era and lamp posts have been made from concrete for many years. However, producing luminaires from this material has been a more recent development. While the mid-20th century brutalist style of architecture based on rough cast concrete with all the shuttering details left on show is still generally unloved, the use of smooth-cast concrete for architectural accessories seems to be on a strong growth path.

Simes Lighting has enthusiastically embraced the use of concrete in recent years and their latest concrete luminaire series – Ghost – designed by Marc Sadler recently won the exterior luminaire section of the darc awards in London after previously receiving a Red Dot award.

Simes is a family run company based in northern Italy with three production facilities covering the complete luminaire engineering, testing, manufacturing and assembly process. Established in 1973, the company is now run by Roberto Botti – son of the founder Egido Botti who had a background in the production of aluminium die castings. Roberto Botti has taken Simes towards a higher level of luminaire design and innovation, introducing a variety of independent designers to the company including Matteo Thun, Klaus Beggati and Marc Sadler.

An early adopter of LED technology, over 80% of the Simes range is now solid state with a clean contemporary aesthetic. Milan based veteran designer Marc Sadler has a long experience in the design of mainly decorative lighting products with a clientele including Flos, Foscarini, Barovier&Toso and Fabbian. The use of novel materials and processes has always formed a central part of his work.

The Simes product range is grouped by material type, termed Material Expressions, and includes separate sections for concrete, aluminium and wood – which is a novel and useful approach for the customer.

The first Simes concrete series of products was launched at Euroluce in 2014 and was based on design concepts from Roberto Botti. The Ghost collection was developed from this concept with the French born Sadler, who was selected to undertake the design as his first project for the company.  The range was launched at Light + Building in March this year and has had a very positive reception. The range takes the ideas of design minimalism and hidden light sources to the logical conclusion, as the luminaire is completely concealed within the concrete housing that is poured on site.  Simes describe the range as a lighting void.

One of the most ingenious features of luminaire design is the way it assists with the on-site casting of concrete around the structure. A two-part injection moulded polypropylene housing is fixed to the wooden shuttering with disposable thumb screws prior to pouring the concrete.  A template is supplied to ensure the luminaires are correctly positioned and provides a drill guide for the fixing screws.  Flexible electrical conduit is run to the housing and sealed with a generous sized compression gland. After the concrete is set, the shuttering is removed and the front moulding can be withdrawn leaving a neatly formed smooth concrete recess. Any trapped air bubbles or imperfections in the surface of the concrete are said to add to the personality of the lit effect.

The light engine is housed in a die cast aluminium heat sink, with the moulded polycarbonate window sealed with resin then installed into the housing, which is now fixed into the concrete.

The LED light engine is available in both dimmable and non-dimmable versions.  The non-dimmable type runs direct from 230 VAC with an on-board ic based driver system. The dimmable version runs from a remote dimmable driver for easier servicing. Simes claims a light output of 305 lumens with 3,000K 80 CRI LEDs with an input power of 9W.

The Ghost series currently includes vertical and horizontal rectangular types as well as a square recess. It is understood that a smaller square version is now under development.

Ghost is a type of ‘negative product’ – the result of removing half the product to create a light emitting space. From a luminaire designer’s perspective I would always be concerned about leaving the quality of final finish to the company pouring the concrete but the advantages of completely hiding the luminaire are clearly attractive.

The design is well-considered and executed and the good reaction received so far by the architects and designers bodes well for future sales.