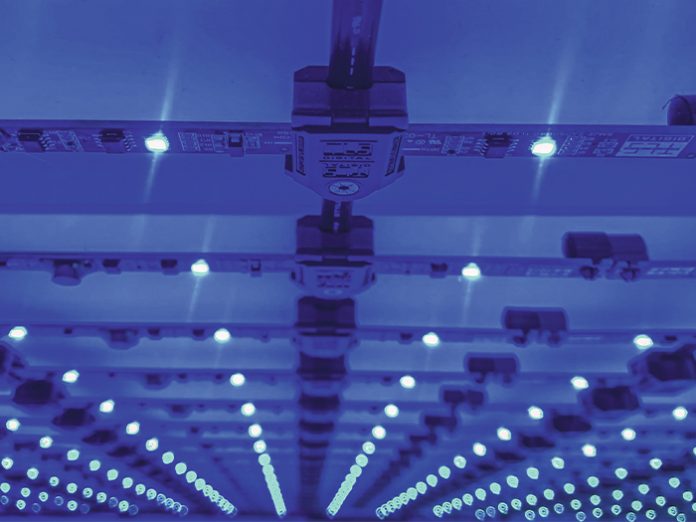 Following on from its appearance at [d]arc room last month, David Morgan delves into the TLS portfolio, examining its flexible backlighting systems and light boxes.

Lighting companies come in many forms and develop from a variety of starting points. In the case of TLS, its parent company Media Graph, a printing company, identified the need for a flexible backlighting system to work with the large-scale fabric printed graphics it produced for its retail and advertising customers.

From an early stage in its history, Media Graph – a 25-year-old company based in Montreal with more than 50 staff – had started to develop and market non-LED backlighting systems and extruded frame systems. The company founders David Sellam and Orit Toledano identified the need for more flexible systems to create light boxes in a range of sizes and spotted the potential in using LED light sources. The TLS system was first introduced in 2008 and has been continuously developed since then. In 2010, TLS was spun off as a separate company in order to develop other markets beyond retail and advertising display.

The core of the TLS business is its innovative, patented lighting system which is used to create light boxes in a wide variety of sizes.

TLS stands for Tension Lighting Systems, which describes exactly how the system works. The key innovative design feature of the TLS system is the way the light engines are mounted into the light boxes onto tensioned stainless steel wires, which carry power and data to the LED boards. This wire suspension system can be used in conjunction with one of the TLS extruded housings, in other frame systems or fixed direct to the building surfaces. A neatly designed mechanism allows the wires to be easily tensioned after installation in the housing, while a series of anchor components support and fix the tensioners to the mounting structure and provide connections to the low voltage power source and dimming system.

The LED light engine boards snap onto lockable holders mounted on the suspension wires with an ingenious series of cut-outs along the side of the boards, which ensure the correct polarity connections are made. Because the wire suspension system does not block light output in any direction, the TLS system can be used to create both single and double-sided light boxes.

The standard distance from the light engines to the lit diffuser surface to avoid any hot spots is 60mm but TLS also provide a snap-on wide beam lens that allows this distance to be reduced. TLS provide a neatly designed test kit to allows designers to experiment with light engine types and spacing to the diffuser surface before making a final specification.

The LEDs used on the TLS light engines are only run at up to 0.2 Watts each, although rated for higher power use. This ensures very long life and reduces the need for heat sinking within the system. TLS provide their own design of DMX controllers for the colour changing and digital systems. One particularly nice design feature is an indicator light system which helps to identify the source of any problems.

The flexible cable system is not only suitable for flat displays, it also allows the system to be used on curved surfaces including columns to create evenly lit backlit architectural surfaces. Wrapping the TLS array around a column can create surface lighting and be installed without needing to fix into the column surface.

TLS aims to provides a complete turnkey light box system including installation where required. The range includes a variety of aluminium extruded frame types to create display light boxes, which are also used for architectural lighting.

The 100mm deep Lumicloud system is used to create large-scale illuminated ceilings or suspended light boxes. Sales of complete Lumicloud installations now make up around 80% of TLS sales. Rectangular and curved shapes can be produced with this system by forming the extruded sections. Lumicloud enclosures include a back reflector which increases downward light output and also prevents debris entering the light box.

It is understood that the installed cost and installation time of a Lumicloud ceiling is significantly lower than using separate lighting and stretch ceiling elements, which is a clear benefit. The Lumiline system is used to create narrower suspended light boxes or continuous lines of light is available in 125mm and 25mm deep sections.

A very wide variety of materials can be used as the front surface of TLS light boxes and ceiling luminaires, including the printed foils produced by Media Graph. It seems that TLS always try to incorporate innovative design details in its systems, and the company has created a very neat method to hold the stretch fabric diffuser to the extruded frame with a snap-in extruded polyurethane extrusion. This allows the diffuser to be easily replaced or upgraded. The polyurethane extrusion creates an IP65-rated seal to the extruded frames, ensuring that the light boxes can be used in exterior applications.

TLS may have started life in an unusual spot in the lighting world but has now grown into a company able to offer a range of innovative solutions for retail and architectural applications, while collecting design awards and high-profile brand customers along the way.