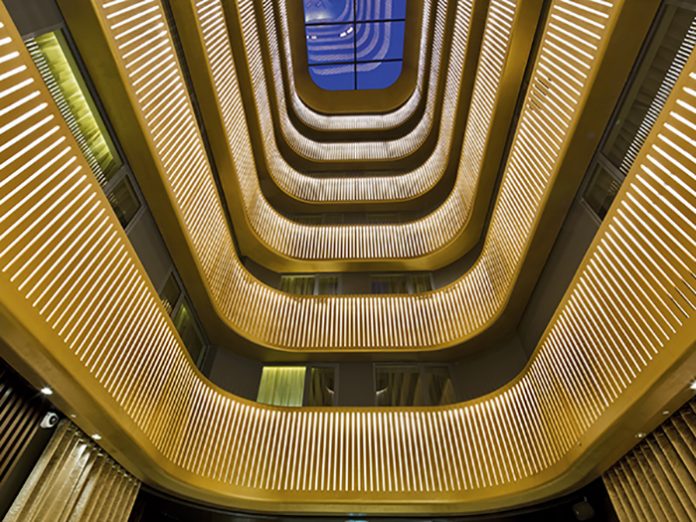 The Pavilion is a Grade II listed building dating from 1923. Designed by Frank Verity and originally constructed as a 2,900-seat cinema, the building was awarded the RIBA London Street Architecture Award for the best London façade. After heavy damage caused by a V1 flying bomb during World War II, the building was vacant until 1955 when it was restored and reopened as a bingo hall. Before the recent redevelopment of the building into a hotel, the building had been disused for over a decade and had fallen into a state of disrepair. While the front elevation maintained much of its original design intent, the original interiors had largely been demolished and the rear façade had been extensively added to and adapted over its lifetime.

The idea of converting this dilapidated building into a four star, 300-room hotel presented an ideal opportunity to give a much loved, but neglected building a new lease of life while revitalising and securing the retention of this important heritage asset and landmark on the Shepherds Bush Green. Brought on board by Kosmopolitan, Flanagan Lawrence Architects’ proposal recognised and preserved the Pavilion’s external civic character by retaining the special features of the building while generating new elements from the original architecture.

The design concept was derived from a detailed understanding of the building’s history and context rather than simply forcing a new use to work within the existing shell. The result is an elegant and balanced response designed to complement and refine the original character of the building. The final scheme retains the original award-winning brick façade, with minor alterations to ensure natural light within the hotel rooms behind, and recreates the original roof form using modern materials. The use of glazed ‘shingles’ as opposed to the original use of bitumen roofing for example, allows light within the upper floors of the scheme, which would have previously been un-usable space.

Architect Jason Flanagan explained further: “As the building had been used as a cinema it was effectively a solid brick box so we had to take the façade and roof down which were either solid brick or bitumen for the roof and replace them with materials that would allow light and views in the hotel rooms. We created a number of new openings in the façade but they’re very discreet so they don’t compete with the original architectural features. This was the main challenge – coming up with solutions that would allow for hotel rooms to function behind the façade while keeping the appearance of solidarity – this was the trickiest bit of the whole design.”

The rear of the building, having retained little architectural merit, was replaced with a simplified interpretation of the main front façade, using similar materials however, visibly discernible from the retained façade. From the offset Flanagan and his team were very clear on what should be expected of the design, both in the architecture and the lighting: “What we’ve tried to do with the appearance of the building by day and by night, is to present the original form – but then there’s something very interesting that starts to happen to the building as the sun goes down, you get a very strong sense of the original architecture in how it is washed with light, but then you also get this very subtle layering as the building becomes transparent,” said Flanagan. “So behind the terracotta you see this random pattern of the rooms, which repeats itself behind the glass roof. You get a rich composition through the way the lighting portrays the architecture.”

While the hotel’s façades are a balanced composition of old and new, so is its interior. To incorporate the new hotel functions, the interior of the building was mainly removed. However, the new interior architectural sequence is derived from the hierarchy of space in the original design and begins with the triumphal arch, which has been formed as a quarter dome to mirror the form of the corners of the external roof. This leads into a lower foyer, arranged in a similar configuration to the original cinema foyer, including a reference to the original circular floor decoration, which marked the centre of the foyer and entrance to the cinema.

“We tried to take the geometry and form of the outside and bring it indoors,” said Flanagan, “so in particular we utilised the curved form of the arched entrance, curved form of the roof corners and so on. We stumbled across a photograph that featured circular detail on the floor, which we picked up on and recreated. If you look at any of the interiors of the foyer and entrance, there’s this circular feature that we’ve recessed up into the soffits but below that, there’s a repeat of the original feature on the floor and that’s become a real focal point of the foyer.”

The theme of ‘golden age cinema’ is also picked up in a series of art deco inspired curved roof vaults in the foyer space, while vertical circulation to the upper bedroom floors is located in a similar position to the original circulation core at the west end of the tower. The atrium opens off the foyer and rises to the full height of the building creating an impressive focal point for the hotel around which the upper floors are wrapped in a series of golden hoops, mirroring the external roof form.

For Flanagan, the relationship between the Pavilion’s architecture and lighting design is intrinsic, with the two elements working as an integrated solution. Having worked together on previous projects, Flanagan asked Mark Hensman and his team at EQ2 Light to come on board once more for the Dorsett project.

“It’s a question of understanding the layering and hierarchy,” said Flanagan, “working very collaboratively with Mark and his team so that all of the key building features inside and out reflect light. The exterior lighting was a relatively straightforward conversation because we knew what we were dealing with when it came to the external architecture – it was very much about a hierarchy of key features. It’s all about revealing the principle levels and order of the building – allowing the upper levels to be more discreet and light themselves from within, it was a simple elegant piece of townscape lighting.

“The question was then, what do we do inside? In the original planning schemes there were layouts of what the insides were, but this didn’t really evolve until we started working with the Kosmopolitan team. We had to think about what’s important, so the majority of the wall surfaces in the foyer are very dark and recessive because we wanted all the focus to be on the key ceiling features. It was our aim to have a series of recessed ceiling coffers that Mark could uplight. These would be the principle lighting surfaces giving the glow that we were looking for in the foyer.”

It was at this point that the project evolved from an architectural form to an environment made up of gold and dark interior finishes. It was Flanagan’s vision that the building should be comfortable and acoustically pleasing, allowing people to sit and converse without having to raise their voices – meaning acoustic absorption panels were implemented. This in turn, brought about the idea of using lighting behind the panels that would result in a warm glow from within – this is where EQ2 developed the detail.

“When we moved inside, Jason and his team had the basic framework in place and we pushed for dark ceilings and lots of dark furnishings so we could give the hotel an intimate feel. The early brief direction focused on how the shapes and forms of the building would allow this to happen.”

As the Dorsett is a hospitality environment, it was imperative the lighting was beautiful with high quality colour properties. Hensman told mondo*arc how he was looking for controlled shadow play and gentle modelling – all the things that make an environment feel warm and comfortable. “We’re always looking for light sources that have great colour and quality and there’s a precision that we work to,” he said. “The lighting had to be energy efficient and maintenance effective as well, while being discreet and invisible to the general public. And so what you find at Dorsett Shepherds Bush is linear detailing and linear elements in the atrium and public areas and a lot of down lights tucked away in the ceilings.”

Commenting on challenging aspects of the project, Hensman continued: “Dorsett is a very successful hotel brand, especially in south east Asia and they know their market very well. So there was a particular challenge in trying to marry that operational knowledge with the particular way UK and European markets work. This was always an interesting part of the project because we had to work hard to make sure we delivered what would work within the context of the Dorsett brand and European tastes.

“I love the interior design of this building,” he continued. “Shepherds Bush is genuinely different to a lot of other projects we’ve worked on and I think it’s partly related to the fact we had a clear vision from the architect. There aren’t that many hotels that have the depth of darkness to them that Dorsett does – it’s very relaxing.”

According to Hensman, there was a painstaking amount of work that was key to the way the building now presents itself – all related to the lighting and interior design integration, as mentioned before.

The former cinema was and still is the most imposing building on the Shepherds Bush Green. It is a building exhibiting a finite form rather than a mere perimeter building – a careful balance of old and new, acting as a catalyst for the continuing regeneration of the area.