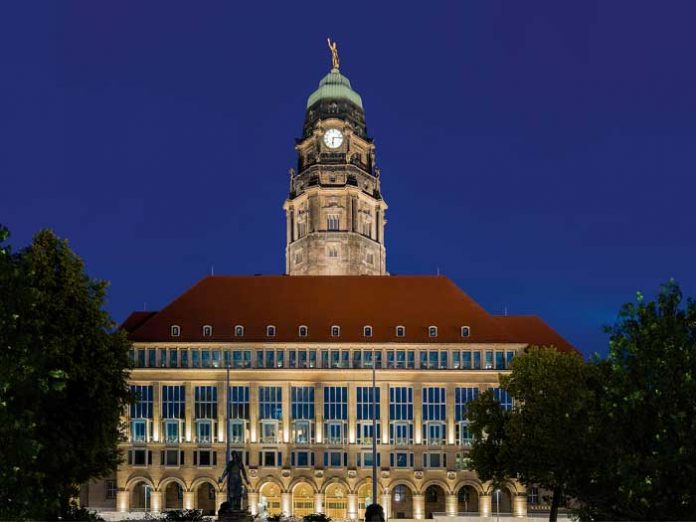 As the city of Dresden sought to illuminate the historic, neo-renaissance New Town Hall among its famous skyline, it turned to Studio DL, whose introduction of warm white light helped bring this landmark building to the fore.

With its historic tower, Dresden’s New Town Hall is a key component of the city’s famous historical silhouette. The four to five-storey, sandstone-clad building is a Neo-Renaissance blend of Neo-Art Nouveau and Neo-Baroque, capturing the rediscovery of Dresden as a baroque city during the time of its construction in the early 1900’s.

Designed in 1901 by Karl Roth, the Rathaus boasts an impressive total area of 13,000sqm and was built under the guidance of Stadtbaurat Edmund Bräter and Karl Roth between 1905 and 1910. Roth landed the job after winning an architectural competition for the design of a new town hall due to a lack of space in the old town hall.

However, after Dresden was almost completely destroyed during the Second World War, with the town hall in particular being badly damaged, reconstruction of the building began in 1948. This reconstruction saw the installation of the statue of the Trümmerfrau – a tribute to the women who moved the millions of tons of debris after the war – which has been standing in front of the Rathaus since 1952.

The Goldene Pforte was also restored during the reconstruction; this consists of four golden plated doors with two bronze lions in front of them. After the war, several coats of arms of cities that had experienced similar damage to Dresden during the conflict were installed on the façade of the town hall.

Since 1979, the New Town Hall has been regarded as a monument to urban development and architecture, while also serving as a monument to reconstruction. This means that any further work on the building instead acts as a revitalisation, in which the historic fabric of the building is only changed as far as monument protection would allow, while still catering for modern usage purposes.

Planning for the latest ‘revitalisation’ of the town hall began in the summer of 2009, as it was determined that this unique building in the landscape of Dresden, with its exposed location, needed a superior lighting plan. Architecture firm Winkels, and its partner International Light Architects had previously created a lighting master plan in 2008, which gave Studio DL guidelines for light colour and intensity when it came to their planning for a new lighting system.

While analysing this lighting masterplan, it was realised that previously, the New Town Hall was not visible in the city’s historic skyline at night. Because of this, the plans recommended a warm light colour for the façades of the building, predominantly made of locally sourced Elbe sandstone. As the structure of the building from the viewpoint of the nearby Elbe River was already composed in the initial masterplan, the city’s planning office then described the front façade of the building as ‘the most important view’, and ordered a new lighting design.

Upon being given the task of constructing a new lighting design for the building, Studio DL first refined and expanded the simplified 3D model of the city to design the draft. In this, they were able to adapt the textures and rework the façade, meaning that mounting positions, intensities and aesthetics could therefore be shown, discussed and coordinated in the 3D model. After a few appointments, the committee at the city planning office agreed to Studio DL’s draft.

The hall’s new lighting was coordinated with the Office for the Protection of Historic Buildings, and it has been designed to emphasise the structure of the building, with the lighting far from the building maintained for the large roof surfaces. The windows of the banquet hall have been designed with cold-white LEDs in order to accentuate the individual window cassettes with different light tones. The wide array of details on the front façade that needed to be highlighted did present Studio DL with some issues, however, the extensive prep work involved with the 3D models meant that any challenges were easily managed.

Elsewhere, the lights of the arcades were renovated, illuminating the base of the building in a warm, atmospheric white light. This inviting lighting complements the golden colour of the doors of the Goldene Pforte, designed by Karl Groß.

The tower of the town hall (the Rathausturm) was set up with the latest lighting technology, while the clock backlighting was also renewed. Since the side façades are less integral to the building’s appearance on the city’s skyline, only the balconies and protrusions were staged here. Masts remote from the building also brightened the façade.

The outcome of the revitalisation of the New Town Hall, carried out in cooperation with ILB Dr Rönitzsch, who was responsible for supervising construction and the implementation of the project, is that the building can now clearly be perceived in the city’s skyline at night, while the structure and architectural atmosphere of the building is elaborated from a close view.