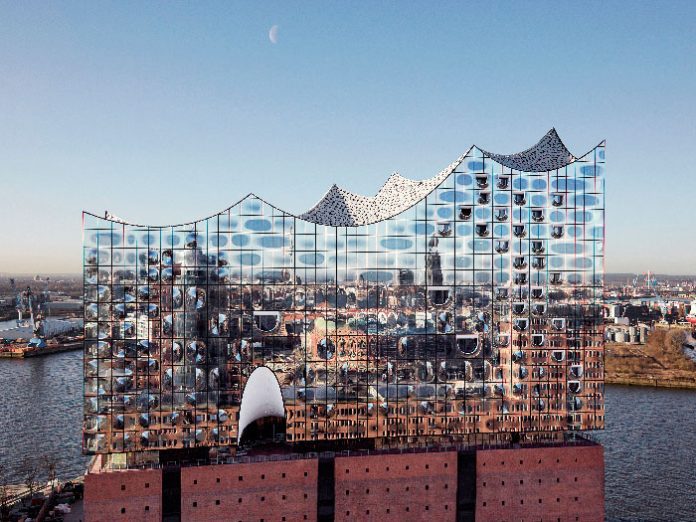 The Elbphilharmonie on the Kaispeicher A marks a location that most people in Hamburg know about but have never really experienced. The Kaispeicher A, designed by Werner Kallmorgen and constructed between 1963 and 1966, was originally used as a warehouse for cocoa beans until the end of the last century. The new building, designed by Swiss architecture firm Herzog & de Meuron, has been extruded from the shape of the Kaispeicher A and is seamlessly congruent with the brick of the older building on top of which it has been placed. The top and bottom of the new structure are, however, entirely different from the plain, blunt shape of the warehouse below. The broad, undulating sweep of the roof rises to a total height of 110-metres at the Kaispitze (the tip of the peninsula), sloping down to the eastern end, where the roof is some 30-metres lower.

In contrast to the stoic brick façade of the Kaispeicher A, the new building has a glass façade, consisting in part of curved panels, some of them cut open. The glass façade transforms the new building into a gigantic, iridescent crystal whose textured appearance changes as it catches the reflections of the sky, the water and the city and transforms them into an intricate puzzle on its façade.

Upon reaching the top of the Kaispeicher A, visitors find an open space, a public Plaza above the city. Between the top of the Kaispeicher A and beneath the new building – at the joint between old and new – is a new public space that offers panoramic views. Along its edges, vault-shaped openings offer theatrical views of the River Elbe and the City of Hamburg. Further inside, a deep vertical opening creates constant glimpses of the foyer areas of the Grand Hall above. A café and the hotel lobby are located here, as well as access to the foyers of the new concert halls.

The design for the new Elbphilharmonie is a project of the 21st century that would have been inconceivable before. The principle design idea of the Grand Hall as a space where orchestra and conductor are located in the centre of the audience, is a well-known typology, along with the arrangement of tiers that take their cue from the logic of the acoustic and visual perception. Here, this logic leads to another conclusion. The tiers are more pervasive; tiers, walls, and ceiling form a spatial unity. This space, rising vertically like a tent, is not determined by the architecture alone but by the 2,100 listeners and musicians who gather in the space. The towering shape of the hall defines the static structure of the building and is reflected in the silhouette of the building as a whole.

Not only is the Elbphilharmonie a display of outstanding contemporary architecture, but it also features a complex and artistic lighting scheme developed by Hamburg-based lighting designer Ulrike Brandi.

Brandi has created an understated and subtle scheme, leaving the architecture at the forefront. ‘‘The architecture of the Elbphilharmonie is powerful enough,’’ explained Brandi. ‘‘So we didn’t want to create a secondary spectacle with the light.The artificial light is modest and works with simple optical principles.’’

In the HafenCity quarter of Hamburg where the Elbphilharmonie is situated, there is sufficient illumination provided by the surrounding area. As a result, the concert hall is easily visible without its own spotlights. The lighting concept also corresponds to the Federal Emission Protection Act, which regulates light pollution. The port city is a residential area, therefore the light emission of the Elbphilharmonie is designed so that it doesn’t interfere with the immediate environment.

Special lighting accents fill the gap between the old and the new building parts as well as the large arches, which are cut into the façade. They are illuminated in the evening and add rhythm to the entire picture, while during the day they carry daylight deep into the building. ‘‘During this time, a dialogue between daylight and artificial light begins to dominate the artificial light until the end. The result is a variety of effects from the light refraction, play of illuminated and unlit windows, and the printed grid glass of the façade,’’ added Brandi.

During planning it was ensured that the sky, the water and the panorama of the city can be experienced from within. That is, in the plaza or in the foyers, it is never so bright that the view outside would be hindered.

One notable area of Brandi’s lighting scheme can be found behind the entrance above the escalator. ‘‘The escalator is not linear but slightly curved,’’ explained Brandi. ‘‘The curved upward movement is a special experience. The light is reflected from the walls and the ceiling into the room, while glossy spots on the matte plaster provide additional special effects. They dazzle like sequins on evening dresses and thus form the prelude to a celebratory evening.’’

An interesting detail of this area is that the lights are installed at the bottom, hidden beside the stairs. This ensures wonderful indirect light and is important for subsequent maintenance.

In the plaza the artificial light comes from the ceiling, where it is reflected from 750 spherical lamps, which were customised by Zumtobel. These LED solutions are grouped in diamond shapes and provide pleasant warm-white general illumination with a colour temperature of 3,000K. These luminaires can be found throughout the building. Sometimes grouped into diamonds, sometimes randomly distributed over areas, they are something of a musical motif, which is repeated in variations.

Over 3,400 lamps were installed according to Brandi’s plans, including: 750 glass ball lamps in the plaza, 650 mouth-blown glass ball lamps for the large hall as well as 750 linear lamps for the foyer. These radiate out from the ceiling around the concert hall – a symbolically charged positioning that was a requirement of the architects.

In the concert hall itself, the illumination emphasises the grandeur of the space. Here, Herzog & de Meuron, Brandi and the glass designer Detlef Tanz have referenced the architectural philosophy of combining old and new by working closely with Zumtobel to craft 1,200 hand-blown glass ball luminaires. Decorating the grandeur of the space, the fittings emerge from the undulating acoustic ceiling, in which the luminaire housings are discretely concealed from view. The result is a luminaire with an especially attractive appearance, which uses a colour temperature of 2,700K to create an emotive atmosphere in the room. The microshaping of the walls, which was created for the acoustics, provides playful optical effects, where the lighting, with its many small light points, emphasises the wave-like and irregular structure.

Furthermore, there are lights placed on top of the large acoustic reflector on the ceiling, which illuminate the vault above, avoiding the impression of a dark cave. On its underside, stage lighting is installed along with additional stage lights that are discreetly situated behind a slit in the ceiling.

An integral part of the lighting design are the windows, whose thousands of dots create a pixelated effect used for sun protection. In contrast to usual sun protection glass, however, the light is not filtered uniformly over the entire window surface. The dots become denser along the edges, while in the middle, the view is free. This weighting makes the façade livelier and the view to the outside more interesting. The dots are coated in silver on the outside so that they reflect light. On another layer, there are points inside that are black to avoid reflectivity and to allow visitors to look outside without sun glare. At the same time, the round dots take on the festive sequined motif, which can be found in the tunnel as well as the ball lamps.

Brandi concluded: ‘‘The location of the Elbphilharmonie is unique in terms of light conditions. You see the wide sky, the water with its reflections of light, and last but not least the sunset in the west. With the façade the architects have designed something exquisite. From each viewpoint, new and agitating lighting effects are explored.’’