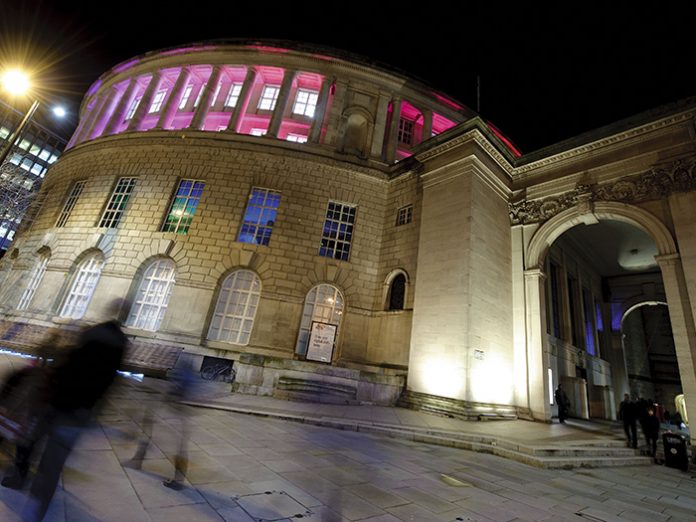 Enlighten Manchester festival of light and sound art transformed public spaces across the city centre into an immersive and inspiring cultural celebration. More than fifteen installations and performances brought together an ambitious programme of light works.

With more than fifteen installations and performances – the festival was a vibrant hot bed of light, sound and literature.

Following a successful pilot in 2014, the festival launched a new relationship with Manchester Central Library as the main venue to bring together exciting local and international talent, skills and energy with an ambitious programme after dark. Light works were also on show at The Bridgewater Hall from leading audio visual artist Kathy Hinde and Liverpool-based contemporary composer Matthew Fairclough.

Organiser of the event – ‘Curated Place’ is a Manchester-based creative production company specialising in developing, delivering, managing and marketing major projects across international borders and with numerous partners. It commissions and presents new music and visual art across Europe and beyond, and has successfully developed major city-wide projects for major institutions and establishments, taking projects from concept through to delivery in the UK, the Netherlands, Iceland, The Faroe Islands, Norway and Egypt.

Andy Brydon of Curated Place and festival director said: “Being able to deliver the first full outing of a light festival in Manchester is the best way we could launch a relationship with these brilliant venues. “We’re all looking towards developing the light festival as an annual event to inject some high quality public arts into Manchester’s Christmas celebrations. This year we had some of the UK’s leading sound and light artists collaborating at the boundaries of their disciplines helping us develop the festival from a pilot to a major family event. Next year we’re hoping for more.”

Techno-logical music for amplified electromagnetic relay and three light bulbs. A relay is used to individually turn the lights on and off. The acoustic sound of the relay’s switches is filtered and transformed. Performed live, Relay is sound and light combined in a rhythmic, trance-inducing play of echoey clicks and dancing shadows.

Light Wave Power is a light sculpture and professional development project developed by Manchester Central Library in collaboration with Curated Place and kinetic artist Paul Friedlander. This site specific, kinetic light sculpture was presented in the library’s main entrance hall during the festival and consisted of an overhead kinetic wave light display, which allowed visitors to walk underneath. A rotating rope was hung between the obelisks, illuminated by chromastrobic light, creating an impressive display of changing colours in double helixes stemming from the rope’s shape.

Neon artist Richard William Wheater has been working with the RECLAIM project to produce a series of new neon works for Manchester Central Library and around the city centre. Focusing on the silenced voices of youth in society the project created a series of neon statements from participants placed around the city with a centrepiece in the library.

The Chandelier of Lost Earrings – Lauren Sagar and Sharon Campbell

Initially stimulated by a collaboration with staff at St Mary’s Maternity Unit at Central Manchester University hospitals, where staff were asked to donate lone earrings, which had formerly been a pair, and which had some emotional resonance or significance for the wearer. A successful press and social media campaign followed, gathering in many thousands of earrings over twelve months. The act of individuals contributing something of personal value, towards a communal project to form something new, found strong resonance among hundreds of people locally, nationally and internationally. Dripping with glittering jewels, delicate threads of fine chain cascade down the curvaceous structure and close-up the individual earrings form a detailed textured surface made out of the myriad of small forms in every colour.

Entropy is an audio-visual installation based on video mapping projections and sound reactive LED strips. It creates a new dimension, a space-time tunnel where the energy of light is transferred and transformed through the art installation; eight consecutive screens, one projector and mesmerising visuals guided the viewer through the immersive audio-visual experience.

This multi-sensory installation uses the Large Hadron Collider as a reference, where sound and light circulated around the 360º walkway scanning the space for its particles – in the case of the library these are fragments of language. Bespoke infrasonic loudspeakers, along with hypersonic sound systems (directional ultrasound) and regular loudspeakers, circulated three ranges of frequencies. Visitors experienced stimuli that caused the body to enter a flux of affect – sound becoming something felt as well as heard. The light work was synched according to presence and motion so that they eventually travelled together mimicking the scanner effect.

Emotional Fish is a moving light sculpture of the performance figure Miss Fish. It emerges from the darkness and comes forward to bypassing audiences in five different shapes.

In a flux between realistic and fictional characters – man, woman, fish, goddess and demon – visitors experienced the many faces and expressions of the apparently living figure. Unlike any other sculpture of a historical person, politician, poet or artist this generative video piece dealt with the question of fragility, indeterminacy and variability. Emotional Fish reflected new possible constructions and ideas about the human mind and gender – a bundle of selves and a fluid gender identity.

The Stories Under Our Feet – Elisa Artesero

The Stories Under Our Feet are ephemeral light and text artworks trimming the edges of the Manchester City Library benches. Short observational poems drawing on changing weather and seasons to create moments of contemplation for people walking by or sitting on the benches.

Lost and Found are understated light and reflection pieces activated by the viewer. Passers by interrupt the reflection to become either ‘lost’, ‘found’ or sometimes both to highlight the search for sense of self and connection between people.

One Thousand Birds is an installation by Kathy Hinde with surround sound by Matthew Fairclough. Each time the installation was shown, the paper birds were re-made by people from the local community. A statue of Sadako holding a golden crane was built at the Hiroshima Peace Park in memory of her. On the statue is a plaque: “This is our cry. This is our prayer. Peace on Earth.” Every year on World Peace Day (August 6th), people from all over the world fold paper cranes and send them to Sadako’s statue in memory of the innocent victims of war.

Kathy Hinde’s interdisciplinary approach combines different art forms frequently through collaborations with other practitioners, partnerships with scientists, and input from the audience. She has made work for concert halls, theatres and galleries alongside site specific work for outdoor locations and unusual indoor spaces.

She has shown work across Europe, Scandinavia, China, Pakistan, USA, Colombia and Brazil. A new piece seeking to bring more of the natural environment into the city centre saw a flock of 64 origami birds with LED lighting suspended overhead in The Bridgewater Hall Piazza. As night fell the lighting created the effect of birds flying along the street. The birds were arranged in rows, and each bird had its wings positioned at the next stage of flight within the row – aiming to create the impression of stop motion animation, using individually illuminated, hand folded paper birds.