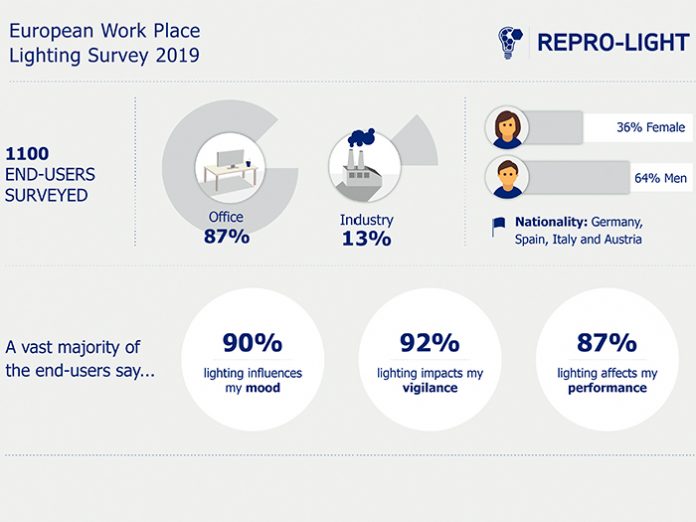 (Austria) – A survey, conducted as part of the Repro-light project, found that 56% of workers want better workplace lighting.

Results from a pan-European survey reveal that current lighting in the workplace is not satisfying end-users and their needs, while at the same time having a big impact on productivity and human wellbeing.

The survey, conducted as part of the Repro-light project, engaged with 1,100 workers across Germany, Spain, Italy and Austria. Participants were asked to consider their working environment’s lighting and what changes they would like to see that could improve their productivity, mood, and performance.

More than half (56%) of end users said they would like the better workplace lighting. A high level as workspace lighting should follow a strict lighting design code (e.g. EN. 12464-1), which guarantees, for instance, that a certain level of brightness is reached in a workplace. The survey showed, that the individual requirements for the lighting differ, showing that personalisable lighting is needed to satisfy all the users.

The results go on to show that women significantly more often encouraged an improvement in workplace lighting, while workers over 50 showed a greater desire for an improvement in lighting. It is not only the need for improved light, more than 50% said that the physical luminaire aesthetics where important to them, especially workers under 30. 80% of those questioned would like to have workplace lighting which automatically adapts to personal needs, with over 75% wanting their work light to change colour when it turns dark outside.

All of these factors play a role in the greater impact of lighting on the workforce of Europe, and not surprisingly more than 90% of those asked said they believe their work lighting can impact their mood, 87% said it affects their performance, and 92% said it influences their vigilance in the work place.

As part of the Repro-light project’s first phase, the survey, conducted by consortium members Bartenbach and Mondragon University, set out to investigate what end users really want in their workplace lighting in order to develop a user-centric lighting design solution for the future.

The Repro-light project, as part of the European Commission’s Horizon 2020 work programme, will now be moving into the next phases of investigation and design iteration to develop a ‘Luminaire of the Future’ that will endeavour to meet all the user needs discovered in this recent survey.

The full report can be downloaded from the Repro-light website https://www.repro-light.eu/downloads