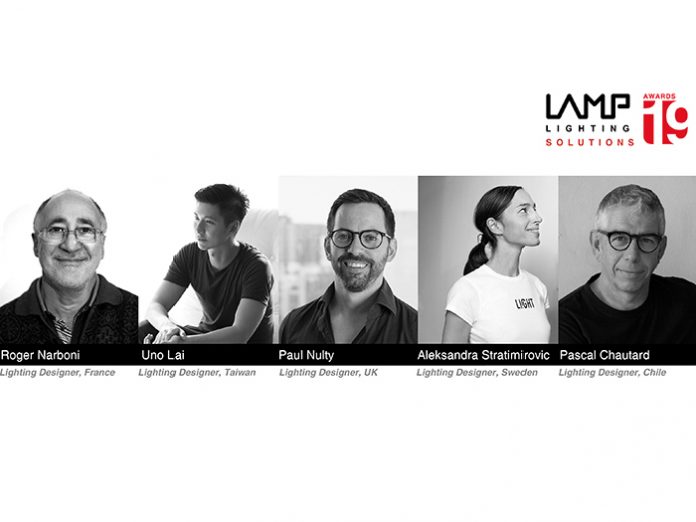 (Spain) – The first judges for the eighth instalment of the Lamp Awards will officially be presented at Light+Building in Frankfurt next month.

The first five members of the Lamp Awards 2019 jury have been announced.

Held in Barcelona every two years, the Lamp Awards celebrate the creativity, innovation and sustainability of lighting projects around the world with awards in architectural outdoor lighting, indoor lighting, urban and landscape lighting, and student proposals.

For each instalment of the awards, a jury of lighting professionals, architects and designers from around the world is recruited to case their eye over the shortlisted entries and make their judgement.

Uno Lai, an accomplished lighting designer and light artist originally from Taiwan, draws inspiration from a broad spectrum of professional training, including photography, theatre design and interior design, with each of these influences nurturing his creative spirit. In 2005, Lai founded Unolai Lighting Design in New York, and is now President and CEO of Unolai Design Group, with offices in Shanghai, Taipei, Hong Kong and New York, and serves on the Board of Directors of the IALD.

Paul Nulty began his career in the lighting design industry 18 years ago, setting up his own practice, Nulty+, in 2011. The firm has grown to have offices in London, Dubai and Beirut, and has gained a reputation for creative, considerate design concepts that constantly test assumptions and delve into new, more energy-efficient and cost-effective techniques. A prominent industry commentator, Nulty has provided expert articles for industry magazines and regularly presents seminars at lighting events worldwide.

Aleksandra Stratimirovic boasts more than 20 years of experience in the world of art and light, completing a number of permanent site-specific artworks in Sweden and abroad in public spaces such as hospitals, schools and stations. In recent years, her work as been included in exhibitions at the Guggenheim Museum in New York, Konstnärshuset in Stockholm, Jardin du Palais Royal in Paris and various institutions and events in London, Amsterdam, Tokyo and Singapore. Stratimirovic is also the co-founder of the Lighting Guerrilla festival in Ljubljana, Slovenia and a core member of the Transnational Lighting Detectives, as well as founder and artistic director of the event Belgrade of Light.

Finally, Pascal Choutard leads LLD Limari Lighting Design, an independent lighting design practice based in Santiago, Chile. Choutard began working with light in 1986, working in theatre lighting in Paris, before founding LLD in 1993. Focusing mainly on architectural, museum and urban projects, Choutard has been invited to give many lectures, workshops and masterclasses around the world, alongside teaching at the school of design at PUC University in Chile.

All five judges will be officially presented at Lamp Lighting’s booth at Light+Building in Frankfurt next month.