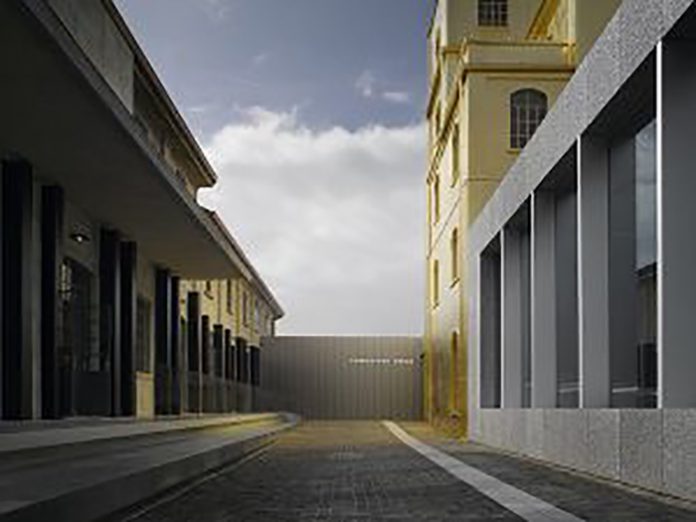 The new Milan venue of Fondazione Prada, conceived by architectural firm OMA and led by Rem Koolhaas, expands the repertoire of spatial typologies in which art can be exhibited and shared with the public. Characterised by an articulated architectural configuration, which combines seven existing buildings with three new structures: Podium, Cinema and Tower, the new venue sees a gin distillery dating back to the beginning of the 20th Century restored and transformed.

The expansive project came with two conditions – preservation of the existing building and the creation of new architecture, which although separate – confront each other in a state of permanent interaction. Located in Largo Isarco, in the south of Milan, the compound covers an overall surface of 19,000m². Working alongside OMA, lighting practice Les éclaireurs was responsible for the lighting throughout, providing a flexible and powerful tool for Fondazione Prada to exhibit modern and contemporary art pieces.

For the renovated elements there was a strong desire to retain traces of the intervention and restoration that took place and so reinforcement beams have been exposed and painted with contrasting colours; the plaster refection has been left raw; and breakthroughs and doors are clearly identifiable through the use of brushed aluminium and large windows. Haunted House, a permanent exhibition in the space, takes up a four level section of the renovated distillery. Designed with gold leaf cladding it displays masterpieces from the Fondazione Prada collection and required complete concealment of all technical equipment. Lighting was realised by three phase tracks featuring ERCO Parscan 24W spotlights – used with wide flood distribution to achieve uniform ambient lighting in the exhibition spaces, while ERCO Parscan 12W with spot and flood lenses allow the exhibits to come to the foreground of attention. The minimalist design of the grey Parscan spotlights blends unobtrusively into the structural steel work of the existing building, directing the focus entirely on the illuminated exhibits. The flanking galleries feature Parscan 12W spotlights and 12W lens wall washers for perfectly uniform illumination of the paintings, emphasising their expressive colours.

As well as delivering the building lighting, Les éclaireurs designed and commissioned the lighting of one of the opening exhibitions – Serial Classic, which focuses on classic sculpture and takes place in the Podium and Beam spaces. The Podium forms the central museum section and features glass facades on three sides; the lighting presents the statues in a mineral and artificial landscape composed of marble-travertine slabs laid on transparent acrylic slides. The lighting had to present the sculptures at every angle and seeks to avoid imposed views on the meaning or aesthetics of them. The sculptures are illuminated to minimise shadows and provide a complete reading of the details. Directions of light are specifically designed to reduce the shadows and allow light to penetrate into the sculptural volumes. ERCO Optec contour spotlights and Pantrac lens wall washers are combined in the space to deliver superb professional LED lighting tools. Parscan 12W with Spherolit lens with spot and flood distributions complement the Parscan 4W with narrow spots to illuminate and accentuate the ancient masterpieces, bringing out even the finest of details for a three-dimensional effect that is delivered with absolute photometric precision.

On the first level of the Podium, Pantrac LED lens wall washers 24W, 4,000K, illuminate the wall surfaces in a uniform manner in neutral white light resembling daylight a lighting concept that produces a wide and spacious impression of the room.

The exhibition that takes place in the Beam space is more didactic and attempts to show techniques of copying and the differences between originals and copies, using video mapping on a block of marble to illustrate this.

The Cinema acts as a mirror to the Podium; with its stainless steel mirrored façade it multiplies the Podium, extending its outlines. Inside, the room is lined with black carpet – a nod to the 1970s from OMA and Prada – while a large chandelier dominates the entrance hall and fluorescent lighting, slipped under a perforated, folded metal mesh, creates a strong welcome sign, extending into the room. The lighting features Zumtobel Linaria with T5 seamless fluorescent lines, positioned between the metal beams of the ceiling with alternate beams forming black and white stripes on the ceiling of the cinema. Steel bars complete the system between each fluorescent line in order to be able to fix stage projectors and allow for different stage configurations. Zumtobel Linaria are also used for the Podium ceiling, general corridors and toilets, while Zumtobel ZE with T5 fluorescents, under PMMA grey cores are attached to the curved ceiling of the foyer.

Robert Juliat ZEP 340LFWW fresnel projectors with 150W LED have been specified for the exhibitions in the Great Hall, the Tank and the Cinema, along with Robert Juliat TIBO 533WW profile projectors with 150W LEDs. At almost 70m long and 20m high, the Great Hall is a huge space dedicated to monumental exhibitions and events. Having been partly dismantled for the construction of the tower, its structure has been reinforced by visible steel beams that have been painted orange. The Tank, which faces the Great Hall consists of three exhibition spaces each 15m in height and a totally transformed eastern façade, with the addition of balconies and large contemporary windows. In both buildings lighting is achieved through stage projectors fixed onto a special cable tray system with a continuous scenic bar; RJ45 and power sockets allow for multiple configurations to be performed. General lighting for mounting and cleaning is delivered through high-power asymmetrical floodlights that are wall mounted.

The original north and south galleries have been subtlety rehabilitated while leaving the structural reinforcements exposed. A series of clean rooms in raw and industrial atmospheres hosting the temporary exhibitions have therefore been created. The existing lighting with T26 fluorescent lines on the trunking system has been removed and replaced with identical equipment but now featuring DALI ballast allowing for individual dimming. Three phase tracks for installing exhibition projectors were added alongside the fluorescent lines – again, working with lighting and general lighting enhancements of works with the use of spotlights. The venue is equipped with intensive and semi-intensive LED spotlights, a number of LED profile projectors and wall washer lighting for artwork on entire sections of walls, all from ERCO.

For such vast lighting design, a powerful centralised management system was required. Les éclaireurs designed a complete DALI management system, including execution studies: DALI relay, dimmers, management for single lights and so on, with multiple lighting scenarios made for each space. A heliometer analyses the amount of sunshine and sky typology there is and automatically switches between different lighting scenarios: sunny, day, cloudy day, dusk, twilight, night, building closure. A wireless touchpad allows for control at any point with wall panels dedicated to each space.

For the main exhibition spaces, lighting is reconfigurable via a graphic interface again designed by Les éclaireurs. It allows the user to select the fixtures one by one, in groups, or individually to graduate as they please.

Moving outside of the space, the exterior sections between the individual buildings of the complex are illuminated using warm white light. Beamer projectors in 36W from ERCO with flood distributions set off the paved pathways, with the special outdoor floodlights of ERCO’s Lightscan range providing lighting for the ground around the entrance areas. Excellent glare control from the ERCO outdoor luminaires ensures a high level of visual comfort and makes sure that the light shines precisely when needed.

This once abandoned industrial space has become a popular environment for artists to display their work, with its predictable conditions non-conflicting with the artists’ intentions, merely enlivened occasionally with exceptional architectural gestures. Not a preservation project and not new architecture, the Fondazione sees two conditions confront one another in a state of permanent interaction – offering an ensemble of fragments that do not congeal into a single image or allow any part to dominate others.