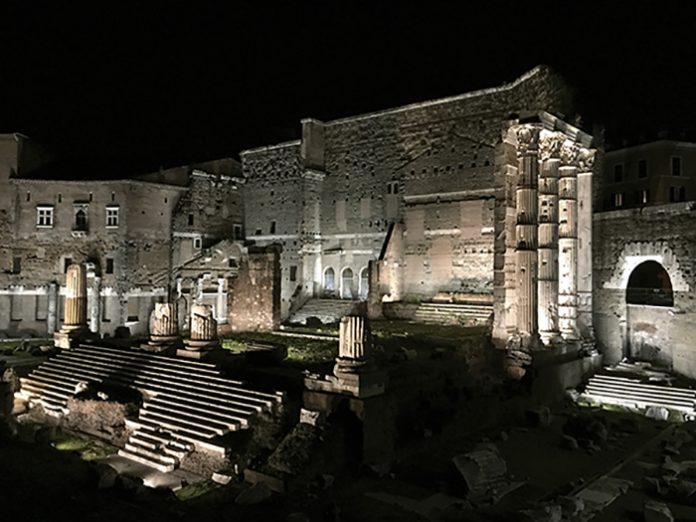 On the initiative of the Comune di Roma Capitale and Mayor Ignazio Marino, the Fori Imperiali (encompassed by the Capitoline, Palatine and Quirinal hills) has become the focus of a major illumination project. This was entrusted to Professor Vittorio Storaro – winner of three Oscars, as the cinematographer of such masterpieces as Apocalypse Now, Reds – and his daughter Francesca Storaro, lighting designer on various high-profile international projects.

Using lighting solely from ERCO, three sections have been illuminated – the first of which is the Forum of Augustus. The central idea for its illumination creates the image of a light wave, which rises from the ground, starts to envelop the Temple of Mars Ultor with great luminous intensity and, while slowly fading, rises to embrace the whole perimeter of the wall that surrounds the forum.

Augustus was also the herald of the Pax Romana, symbolised by a light coming down from above with a lunar softness. Therefore the area surrounding the Temple is accordingly lit from above with neutral, soft, even lighting that casts the forum as a stage on which an act of the History of Rome is played out.

Just as the illumination of the Forum of Augustus finds its equilibrium amid  selective, even and suffused light, so does the lighting of the Forum of Nerva – known originally as the Transient Forum. The right side, which delineates the forum itself, sees a series of lights that, axially provide upward lighting that defines a specific space – that in which the Temple of Minerva was erected. Above the line of the wall, a second series of lights, characterised by the same sense of unity, illuminate the central ground in an even, soft and neutral way. Against this backdrop of lunar uniformity other architectural elements emerge that composed the plinth of the Temple of Minerva: the Pronaos and the so-called ‘Colonnacce’, which are lit from the base upwards, with a specific directional axiality at the columns themselves.

Trajan’s Column serves as the focal point of Trajan’s Forum, pushing a wave of light outwards from a centre that embraces the surrounding space. It seems to emit light itself, centrally, through a series of soft lights that trace out the perimeter of its square base. The light continues its journey, rising up the column, thanks to two circles of selective lights that tell the story of the epic accomplishments of the Emperor. While the parallel columns that delineate the Basilica Ulpia are illuminated from below, the centre of the basilica is lit by a series of projectors that appear to rise up from the ground in front of each column. Their luminosity extends to join a similar radiance generated by another series of lights that, in a centripetal attraction, merges with the first, illuminating the floor uniformly.

The relighting specifications for the three forums posed a challenge to the lighting concept. The context stipulated use of the most efficient LED luminaires for maximum luminous efficacy with minimum energy consumption. Equally, Roma Capitale attached great importance to the long life of the luminaires. Its primary thought, next to ensuring a sustainable investment, was to keep maintenance in this archaeologically sensitive area to a minimum. The prime concern for the Storaros, meanwhile, was optimal implementation of their design concept, which required lighting tools with flexible yet precise light distributions. Given these factors, the decision was made to realise the project with ERCO luminaires.

The Storaros selected projectors, floodlights and wallwashers – Lightscan, Parscoop, Grasshopper and Beamer – alongside Lightscan and Focalflood façade luminaires from ERCO’s range of outdoor lighting tools. With different levels of luminous flux, the luminaires created a hierarchy of architectural details. Combined with the interchangeable ERCO Spherolit lenses, the result is a differentiated concept that achieves the standards required by a complex narrative lighting project. Pinpoint lighting accents and the uniform wallwashing of structural elements direct the view of the visitor. Special attention is warranted for the grazing light of Focalflood, which emphasises the texture of the ancient ruins for a 3D effect.

Luminaires with neutral white light illuminate the architectural elements particular to each forum, such as remnants of the large temples and the Column of Trajan. Warm white light is used as a contrast for all other objects and surfaces; where ERCO LED technology guarantees optimum colour consistency.