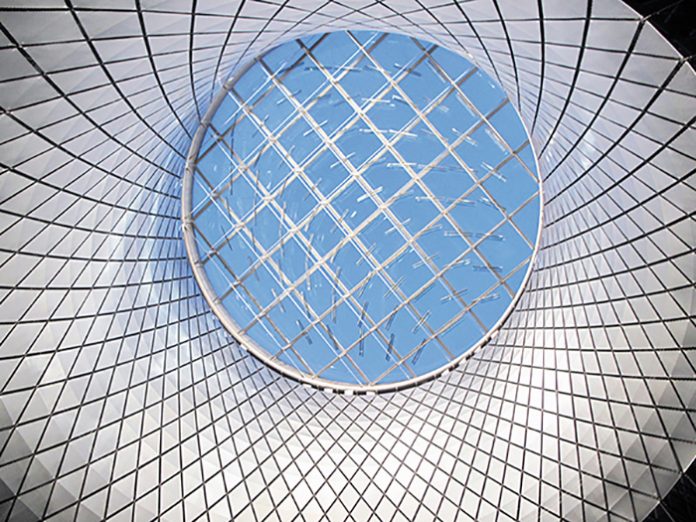 The Fulton Center is the new transport hub for Lower Manhattan. Styled as both a retail space and a Subway interchange the impressive new structure with its centrepiece oculus was designed by Grimshaw in conjunction with Arup and features a daylighting design from James Carpenter Design Associates.

The Fulton Center is the gateway to Lower Manhattan and is the entrance through which 300,000 commuters arrive daily in the city’s business district.

Designed by Grimshaw in conjunction with Arup, with a daylighting design from the New York based James Carpenter Design Associates, the Fulton Center cost 1.4 billion dollars to build and the Centerpiece of the project is the 53 foot-diameter oculus that allows daylight to pour into the building’s principle atrium. The impressive ceiling is formed from a cable structure that supports aluminium panelling that caches the light and appears to shimmer.

Grimshaw was appointed by the Metropolitan Transportation Authority Capital Construction Company as the lead architect on the project in collaboration with prime design consultant Arup. Grimshaw after the completion of a considered design process, designed a dynamic transport environment that treamlines connectivity and enhances the user experience for transit passengers who use the station daily.

The surging redevelopment of Lower Manhattan that has followed after the difficulties prompted by 9/11 and the financial crash of 2008 prompted the creation of the station and it is a vital link to this commercial center and its growing residential sector, acting to connecting eleven New York City Transit subway lines and easing access to PATH trains serving New Jersey.

“From the beginning, we were inspired by the ambience and activity of Grand Central Station,” says Grimshaw Project Partner Vincent Chang.
“We endeavoured to design a similar environment for transit customers and visitors, creating a new front door to downtown New York. By providing a dramatic, light-filled civic space and incorporating the historic Corbin Building, the transit center represents a microcosm of Lower Manhattan’s evolution, one that reflects both the legacy and the revitalisation of the district.”

The Fulton Center is organised around a large-scale atrium contained within an elegant, transparent façade. Tapered steel columns draw inspiration from the historic neighbourhood’s cast-iron buildings and complement the integration and restoration of the adjacent Corbin Building, the historic Romanesque Revival Style office building which dates back to 1888, a time before New York became the high-rise city it is today.

The open design provides unimpeded customer movement and sightlines across a level ground plane extending from the major thoroughfares of Broadway and Fulton Street.

Carefully aligned entrances and exits allow the streetscape to permeate the building, defining clear and efficient pathways to all trains. Once beyond fare control and underground, passengers encounter brighter, widened passageways than in the older stations, with clear signage connecting the complex array of platforms.

The transit hub’s atrium ascends to 120 feet and is topped by a conical dome Centerd on the concourse below. The dome is truncated by an angled glass oculus oriented to the southern sky.

The central architectural concept of redirecting natural light deep into the transit environment in an effort to humanise the space and orient passengers, culminated in the design of the dome’s interior and a new integrated artwork.

Sky Reflector-Net (2013) is the work of engineer, architect and artist; a collaboration with Arup, Grimshaw and James Carpenter Design Associates, commissioned by the MTA Arts for Transit and Urban Design and MTA Capital Construction Company. Held aloft below the oculus, the artwork paints an ever-changing image of the sky across the atrium interior.

The Sky Reflector-Net builds upon the architect’s desire to ensure that the atrium is light filled. Tensioned within the atrium’s conical form, the artwork acts to fold the sky downwards into the core of the building, helping to create the grand civic room that the designers hope will stand in posterity as a rival to Grand Central.

JCDA, working with Schlaich Bergermann und Partner created a cable net structure that fits inside the oculus perfectly. Designed to resemble the film that forms a soap bubble, the façade draws the eye upwards to the ephemeral, diurnal and season rhythms of the sky. The skylight features a perforated facetted reflector system that is able to animate and redirect seasonal sunlight into the atrium. Visible from the corner of Broadway and Fulton the sculpture creates a distinctive point of orientation amid the busy city.

The second element of the project for JCDA was the creation of an underground passageway under Dey Street linking the Fulton Center to the PATH station at the new World Trade Center. The tunnel features interactive light walls that simulate the experience of twilight meaning that the two sections of the project are linked by depictions of the sky.

According to New York Governor Andrew Cuomo, “This new station makes traveling easier for subway riders, and is a beautiful public space for visitors and commuters to enjoy. We now have a new cornerstone in Lower Manhattan, and I am proud to see this unique complex opened to the public.”

Both a neighbourhood asset and regional interchange, the Fulton Center fulfils a significant civic role as a gateway to and from Lower Manhattan. Today, commuters and visitors alike will arrive and depart through a memorable, contemporary urban transit centre that celebrates the city’s history while looking forward to the area’s future.