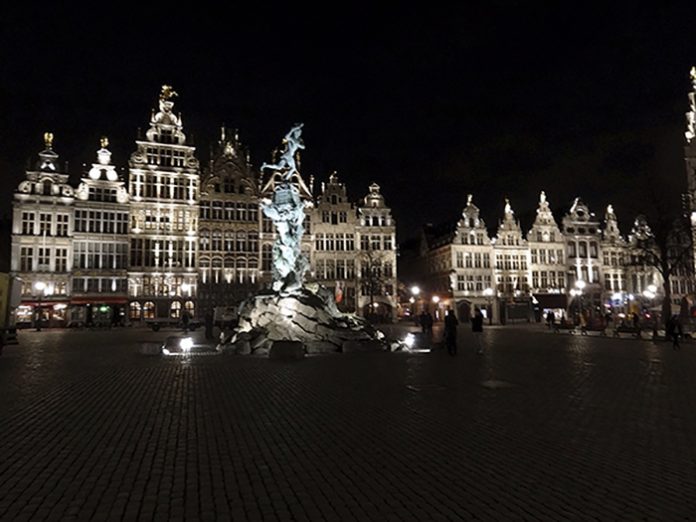 Having won an international competition launched by the city of Antwerp, Belgium, Studio Susanna Antico from Milan, Italy – in collaboration with Giladi Architectural Lighting from Brussels – developed the lighting master plan for the entire city of Antwerp and its neighbourhoods.

Following the decision of the city of Antwerp to adopt the lighting master plan and apply it to any new lighting project in the city, the College of Aldermen decided to renew the lighting of the Grote Markt – the historical market square and centre of the city. Studio Susanna Antico was commissioned to design the lighting for this public space, which was to be executed according to the master plan guidelines. The project was carried-out in collaboration with Giladi Architectural Lighting with the support of Stramien Architects and Urban Planners, Antwerpen.

The area to be treated in the framework of the project, included the square itself; the City Hall building that occupies the entire western side of the square; the three main streets leading to the square; and the important building façades – most of which are historical and listed in the square and along the streets leading to it. With the exception of emergency vehicles and delivery vehicles at limited hours of the day, the whole area had also recently been declared a pedestrian only zone.

At the beginning of the project, the Grote Markt was lit by pole-mounted historical decorative street lanterns fitted with 150 HIT sources. One of the streets leading to the square was lit with the same luminaires mounted on the walls with historical decorative brackets. The other two had recently been re-lit with wall mounted state-of-the-art 150 HST road lighting fixtures (at heights of eight to 10m), out of character with the historical middle-ages Flemish environment, and the wider of the two had also been fitted with different decorative poles and lanterns than those in the square.

The main façade of the City Hall was flooded from two clusters of 400 HST floodlights mounted on the roofs of the historical buildings around the square. Other façades around the square were flooded with 70 HIT luminaires mounted on both sides of the pedestrian poles. Finally, the sculpture and fountain of the Brabo (a mythological character who slayed a giant that had terrorised the people of the area, cut off his hand and threw it into the river Schelde) a focal point in the square, was lit by six in-ground directional luminaires fitted with 70 HITs.

A number of façades, some of which are listed, were privately lit by the owners or tenants, some with saturated colour changers. Many private installations were out of order as were a few of the street lights.

The pervading ambience of the square at night time was dictated by the orange soup of sodium reflected from the main façade of the City Hall. Some gaudy bursts of coloured light attempted a Las Vegas type of visual attraction. Glare was a major feature in the square; colours, materials, finishes and architectural details were distorted or disappeared; the total lighting power amounted to 30KW and the annual consumption amounted to 115MWh.

The design suggested the creation of a comfortable and inviting nocturnal space for city residents and visitors; to highlight the Town Hall, the Brabo sculpture and the rest of the abundant architectural heritage in the Grote Markt as well as the surrounding streets, according to a city-decided visual hierarchy (the master plan developed a tool allowing the city to determine the night-time visual hierarchies in any project). The elimination of all glare, light trespass and light pollution, while cleaning the façades of unwanted luminaires and wiring, respecting the architecture and details were also considerations while ensuring an overall sustainable lighting system; installing an intelligent programmable management system that would control both street lighting and architectural lighting, relating to both as integral components of public lighting (this would allow further energy savings by shutting-down and / or dimming systems according to a pre-set calendar controlled by an astronomical clock).

LED systems were adopted throughout the project as well as a generalised approach of lighting all surfaces from very short distances mainly resulting in grazing illumination of façades. This approach would initially imply a large number of luminaires and complex wiring (including wiring for controls) however these would be offset by the very low power and reduced consumption of the systems, the elimination of glare, trespass and pollution, the minimal visual impact of the systems and the final visual effects and perception of the space and its elements at night-time.

Besides answering master plan requirements for the systems’ longevity, the adoption of LEDs allowed the programming of different scenes according to the time of night, season and any special holidays or events. It also enabled carefully planned and controlled additional power consumption savings at night when pedestrian presence is scarce. Also, architectural and functional (pedestrian) lighting being fully integrated and simultaneously controlled, thus never in conflict, allowed for a continuous level of low and diffuse illumination throughout the project, providing a sense of security and comfort, regardless of the programmed scene. Finally, the LEDs, being close to the architecture – the emphasis of the architectural detail works like a magnifying glass for the aesthetical qualities of the middle-ages Flemish architecture.

The approach was to light the many historical façades in the main square and surrounding streets, while creating a balanced perception of the spaces, giving the four façades of the City Hall a lighting treatment that would highlight the architectural details; reduce the luminance in public spaces and in the streets leading to it while creating a soft, warm atmosphere, in harmony with the old stone façades.

In agreement with the city, the posts of the square would remain on site and the lanterns would be replaced by new fixtures with a quasi-identical appearance but equipped with LED sources and opaline glass diffusing the light and preventing glare. The same luminaires would be adopted in the surrounding streets thus making them an integral part of this public space as per the brief of the city. The height of the pedestrian luminaires would be limited to 4.5 – 5m (as per master plan guidelines and in order to create the more intimate ambience wanted in the project).

The dominant correlated colour temperature adopted was 3,000K, highlighting the old stone façades and creating an inviting atmosphere. In some cases, for the sake of visual interest, 4,000K were specified (such as on the Brabo sculpture or the roof of the City Hall).

Installation of luminaires on historic façades was done in coordination with the department of historical monuments, dissimulating the fixtures wherever possible while avoiding any damage to historic materials. Routing of all required cabling and installation methods were carefully designed within the same parameters.

The installation work took almost three months as every luminaire had to be individually focused and locked in its position, sometimes at extreme heights (luminaires at the top of the city hall were installed with installers reverting to Alpinism techniques because no elevator could reach the location of the luminaires). In order to avoid extensive digging in the historical paving of the square and the streets and high costs of heavy cabling, the management system adopted was a hybrid wired system (DMX) for the City Hall (in which the system was installed) and a wireless DALI system for the rest of the project.