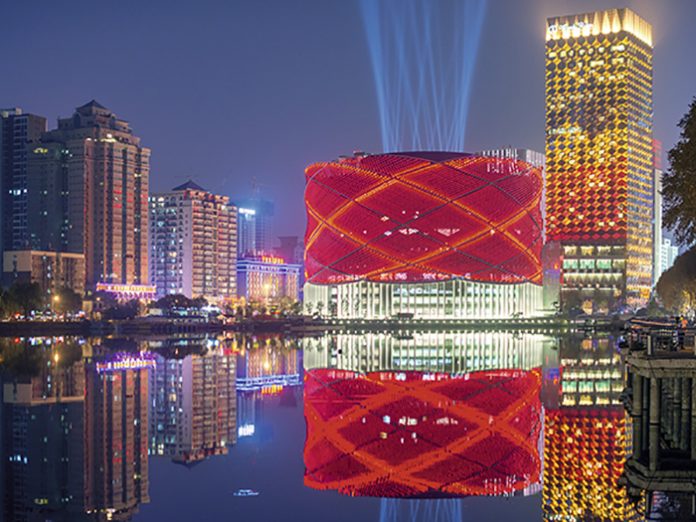 Developed in conjunction with Dalian Wanda Group, the Han Show Theatre is the creation of London-based Stufish Entertainment Architects. Having started on the project in 2010, Fisher sadly passed away in 2013 just eighteen months before the project’s completion and as such, the Han Show Theatre was left in the capable hands of the Stufish team to carry out to fruition.

Purpose-built for Franco Dragone’s ‘Han Show’ the theatre’s façade is covered in 18,000 red aluminium LED disks resembling the ancient symbolic Bi Disks from the Han Dynasty. The building, which benefits from a fantastic lakeside site, features a transformable auditorium able to seat 2,000 and one of the world’s largest moveable LED screens, which is mounted on three robot arms fixed to backstage columns.

According to Stufish Architect Jenny Melville, the team knew from the outset that as well as providing an appropriate symbol for the ambitious show within, the building form and façade would need to work on many different levels, i.e. from across the lake as well as from the more intimate plaza approach from the subway station.

The façade’s Chinese paper lantern concept came early on during the design stage but was subject to many changes before the team arrived at the simple looking solution seen today. “It was felt that the lantern idea perfectly symbolised the nature of the building from within,” said Melville. From the outset it was important that the building didn’t feel inward – rather, celebratory and accessible to all.

“The lighting design of the theatre’s façade was absolutely critical to the concept’s success,” continued Melville. “It was important that the ‘lantern’ could be lit up at night – signalling that the theatre is open and the show is taking place.”

In the Stufish version of the Chinese paper lantern, the bamboo superstructure is reinterpreted as eight intersecting tubular steel rings, suspended in orbit around the theatre fly tower. The paper (or silk) surface is suggested through a series of minimal surface cable nets, hung and tensioned within the lattice of trapezoidal voids generated by the intersecting rings. Each of the 18,000 cable net structural nodes supports a Han Dynasty inspired red concave aluminium disk. The lantern light is enabled by a circular array of red LEDs at the centre of each disk that illuminate the dimpled concave surface. The light across each disk is split into four zones, each individually addressable using DMX control. The end lighting result can host a video image of approximately 600 by 120 pixels across its surface.

“As the evening sets in and the performers prepare for the first show, the lantern surface comes to life running video footage reflecting into the lake and onto the facetted façade,” said Melville. “Much of the content on the lantern surface offers abstract previews of themes and key scenes from the show.

“The podium under the lantern further accentuates the concept,” continued Melville. “The public lobby faces the plaza and a colour palette of gold and white has been used to help emphasise the idea that light is pouring out of the bottom of the lantern. In contrast, the auditorium itself is entirely finished in black textures – as a counterbalance to the bright lobby.”

Naturally, all projects come with challenges and for the team at Stufish, the Han Show theatre presented its own unique issues. “Getting the circular LED array within the disk’s central node to light the disk correctly was our biggest challenge,” Melville told mondo*arc.

“Obtaining an acceptable even light across the concave disk surface was also difficult, as there was a tendancy for the light to be too bright in the middle. We went through many prototypes with the local designers in China, trying different louvre / diffusion fascia plate solutions in front of the LED array to distribute the light in a controlled manner. The node itself was further complicated by the fact that it is also the structural support for the disk – so the final design works hard to achieve both the lighting and structural requirements.”

The team at Stufish also went through several versions of decoration on the disks themselves, from ornate figurative patterns to simple geometric ones – as they wanted the lighting (both natural during the day and LED at night) to have some texture to highlight on the disks.

“It was important to find the correct level of detail and texture as the disks are viewed from many different distances,” said Melville, “from across the lake where they become viewed as one, to just metres away from inside the adjacent hotel rooms. We ultimately opted for a dimpled surface which reflects some of the earliest Jade Bi disks.”

Summing up her experience of working on the Han Show theatre, Melville said: “During the concept design stage we had discussed having white LED lights on the back of the disks. These would have been individually programmable and seen through the lobby atrium and glazed roof down to the lobby balcony floor. However, at the time, the structural solution that was to hold up the lantern skin was different and consisted of hundreds of spokes tying it to the theatre drum – the idea with the lighting on the inside of the disks was to highlight this feature.

“It would have been interesting to see how this would have changed the lantern lighting effect from the outside,” continued Melville. “I think it would have altered the apparent transparency of the lantern skin and perhaps made it look more lightweight – although it may have also reduced the simplicity of the impact it currently has.”