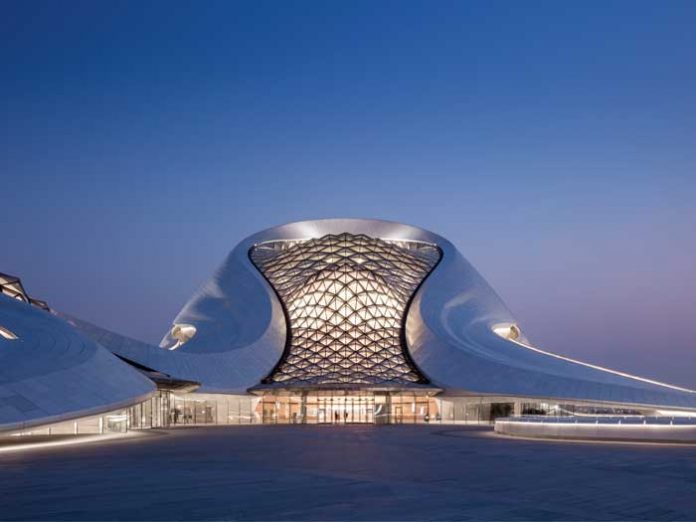 Known as the ‘Ice City’, Harbin, capital of Heilongjiang, China’s northernmost province, houses an expansive, impressive opera house. Set amongst the city’s untamed wilderness and frigid climate, the building boasts a crystal-like purity and transparency, blending in with the surrounding nature and topography.

The lighting for this remarkable structure, managed by Beijing United Artists Lighting Design, was designed to complement the architectural concept that the building grows out from the local environment and responds to the aforementioned untamed wilderness, while also revealing the purity and clarity of the space, creating an enriching experience for visitors in the process. To help them work towards this concept, the lighting team devised a motto of ‘lighting the rhythm of the frozen music’.

Beijing United Artists came on board with the Harbin Opera House project having previously worked with MAD Architects for the Ordos Museum in the Gobi desert, and Dongning Wang of Beijing United Artists, believes that this prior relationship helped create a harmonious working environment. He said: “During our work together on the former project, we had built up trust with MAD and found an effective way of communicating with each other by using the language of light.”

This trust between MAD and Beijing United Artists helped the lighting designers in the bidding process, with MAD insisting throughout that Beijing United Artists was the right firm for the job. “It was a long and tough journey,” explained Wang. “But based on the Ordos project, we were the first lighting design team that the architects were thinking of and proposed to the clients. They liked our ideas so much that they acted quite stubbornly and proposed us to the client again and again.”

Such insistence landed Beijing United Artists with the interior lighting design for the project. However the team still created a full, comprehensive lighting strategy for the whole project, from the interior to the exterior, the façade and the landscape. “We did this because we believe that to achieve a good and responsible design, you should consider the project as a whole, not just the one part that you are being told to do,” said Wang. “One thing that we are still very proud of is that we provided an interior lighting design that is seamless with the exterior, to the extent that it’s hard to tell that it is done by different lighting consultants.”

Working with the concept of revealing the purity and clarity of the space, the team at Beijing United Artists devised three ways of lighting the main atrium in one piece of roof, developing a hierarchy. From this hierarchical aspect, the designers made a careful lighting plan with a ‘less is more’ concept to be more adaptive to the functions of the varied spaces, and the movement of visitors.

At the lobby entrance, a ‘welcome mat’ of light; in the middle, a super indirect light; and on the wooden shell at the end of the lobby, a vertical glow. All light fittings are completely hidden in the architecture, creating a pleasant rhythm of light unobstructed by technical details, and unplagued by hot spots or sharp corners.

The wooden shell is the focal point of the lobby; washed lighting from above gives the whole lobby a warm, inviting atmosphere, while on the canopy outside, spotlights were placed in slots, directing light on the ground to avoid reflection and allow people inside to see out.

To achieve the desired ‘purity’ in the space, it was important for the designers that guests see the light, but not the fixtures. The concept designer worked with a software expert and an industrial designer; together, this team calculated the illumination of each space, while making expert recommendations on where fixtures might be hidden. Through their efforts, visitors can explore the beauty of the space without awareness of any lighting fixtures.

To create a twinkling effect on the pyramidal glass roof, the designer selected a quarter of each faceted unit, attaching it with dotted film. Sunlight adds a twinkle to each pyramidal unit, creating different glass reflections throughout the day. At night the filmed glass is grazed from below by LED light bars, seeming to glow from within and attracting visitor attention from far away.

Within the smaller theatre, guests are reminded of the exterior of the building by a panoramic window behind the stage. This seamless connection to the outside world mimics the gleaming ripple effect of the lake outside. Narrow-beam in-ground features, carefully placed at the aisles along the walls, create the gleaming ripples of light on the walls. The irregular wall texture works with the light to create drama, rhythm and pleasing shadows.

In the big theatre, the architect called for a glowing ‘diamond’ for the owner’s VIP area above the mezzanine. Custom RGB LED fixtures are hidden behind the acrylic diamond panel and transition from starry white to warm amber, changing according to the event or the seasons.

This starry, twinkling diamond approach is replicated in the corridor connecting the basement parking plaza and the main lobby. Fibre optic lighting minimises the visual impact, but creates a dream-like grand entrance at the steps.

Although impressive, this isn’t what the lighting designers originally had in mind, as Wang elaborated: “We initially designed a huge ‘cloud’ or ‘snowflake’ pendant lamp over the grand steps linking the lobby to the parking plaza. We carried out intensive studies on lightweight, fireproof materials, along with other feasibility studies, but in the end we had to make a compromise due to some of the state’s fireproof regulations. It’s a shame as MAD were very fond of the idea too, but we had to lose it and go for the fibre optic solution instead, which we like, even if it’s not what we originally designed.”

In spite of this, Wang remains happy with the final outcome of the project, even if it was more demanding than other projects that he has been involved with. He said: “For me, I feel that it is the toughest project that I have ever worked on! I want to thank the architect, Ma Yansong from MAD architects, for his pursuit of perfection, as this encouraged us to create an equally perfect lighting solution.

“Generally, we are very happy about the final effect. Whether looking at it from outside or inside, or moving from A to B inside, it presents most of our initial plans, in that we tried to create a hierarchical richness and a rhythmic mood to complement the music.

“Now, the light gives the space a poetic elegance and reveals frozen movements in time. Thanks to the open-mindedness of the people at MAD architects, they treated lighting as a very important design element when they were composing architectural design ideas. Now you can see that the lighting has become one of the most vital and poetic design treatments for the space.”

“From my personal point of view, I think it is the best combination of hierarchy and rhythm, and it is the purest lighting that I have ever done.”

Since its completion, the Harbin Opera House has gained a lot of plaudits for its stunning lighting design, most notably at the IALD Awards, held in Philadelphia during this year’s Lightfair International trade show, where it won the Radiance Award – the grand prize of the event. Such recognition was warmly received from Wang: “It is a great honour to win this internationally recognised award, and I was thrilled to step on stage to receive it.”

Wang added that while the award win was a great personal honour, he was hopeful that such recognition would have a knock-on effect for the Chinese lighting design profession as a whole. He said: “The award is a very important recognition for my more than fifteen years in lighting design. Along with my team, we were some of the very first lighting designers in China’s recent lighting history. Back when we started out, there were very few people or clients who would think of lighting design as an independent design discipline, let alone pay for our work. It took a lot of strength and belief from us to get through.

“Fortunately, due to more and more outstanding architects like MAD, and other great projects involved with more international cooperation, we have become more and more confident. I’m hopeful that this award will raise awareness of the IALD in China, and my winning experience will bring more attention to my Chinese peers in the lighting industry, as this will help the lighting industry grow very healthily and rapidly.”