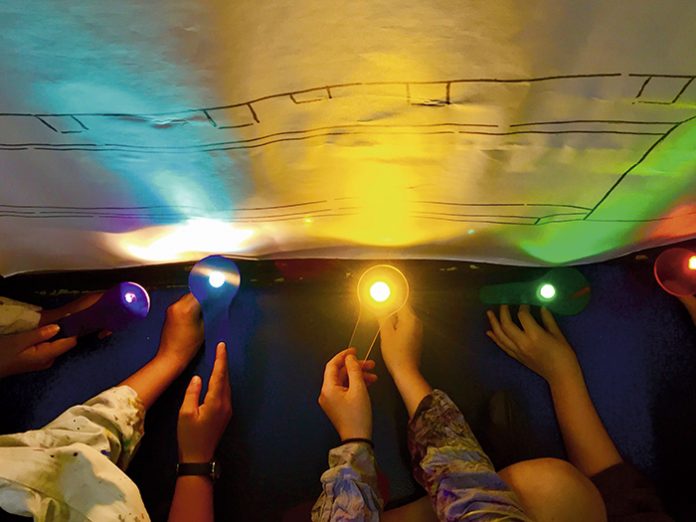 Their designs were used by the SLL to show four famous York landmarks in a new light.

Their resulting designs were then put before a panel of judges, with the winners used to illuminate St Leonard’s Hospital, St Michael-Le-Belfrey, Exhibition Square and the Multangular Tower in the city’s Museum Gardens.

Created by the SLL, the workshops – called Pockets of Light – saw the society visit each school to demonstrate the science behind lighting and its potential to create artistic designs. The workshops also looked to help the students re-think places in their own city, which could be transformed using creative lighting design.

The displays were part of the SLL’s contribution to the illuminating York festival, during which landmarks around the city are lit by artistic lighting designers, including: Light Masonry by Jason Bruges Studio at York Minster; Lumenpulse at the Royal York Hotel; Lumenpulse at Clifford’s Tower; Travelling Light by Heinrich & Palmer at the National Railway Museum; Lumen by David Ogle at York St John University; re Connecting re Creation by Helen Maurer at Holy Trinity Church; Loopy Lou by Rémi Brun at King’s Square; and Orbit by Studio PSK at Shambles.

Alexandra Cornel Atkinson, a second year student on a production arts programme at York College who attended the workshop ‘Introduction to architectural lighting’, said: “I found the workshop interesting, learning about how architectural lighting has similarities to theatrical lighting, also the use of additive colour mixing with red, green and blue LEDs and white LEDs and the way they produce wonderful subtle hues that I will continue to use on other installations and productions.”

Jane Conway, Head Teacher of St Wilfrids, added: ‘‘St Wilfrid’s was delighted to take part in the illuminating York project. The challenge of designing a light display for a section of the city walls not only captured the imagination of our Year 6s, it also gave them an exciting, hands-on science experience to remember.’’

Dan Bodey, Deputy Head of Fulford School, said: “This was a fantastic activity that engaged and inspired our students. The chance to learn new skills, rooted in such a high profile in our city was a real opportunity.”

Jeff Shaw, President of the SLL, concluded: “We are delighted to have had the opportunity to work with students to create these spectacular designs for illuminating York, and also to have had the opportunity to demonstrate the exciting potential of light as an art and a science. The students’ designs were fantastic, and I’d like to congratulate them on their hard work.”

The students’ work was visible as part of illuminating York from 26th – 29th of October.