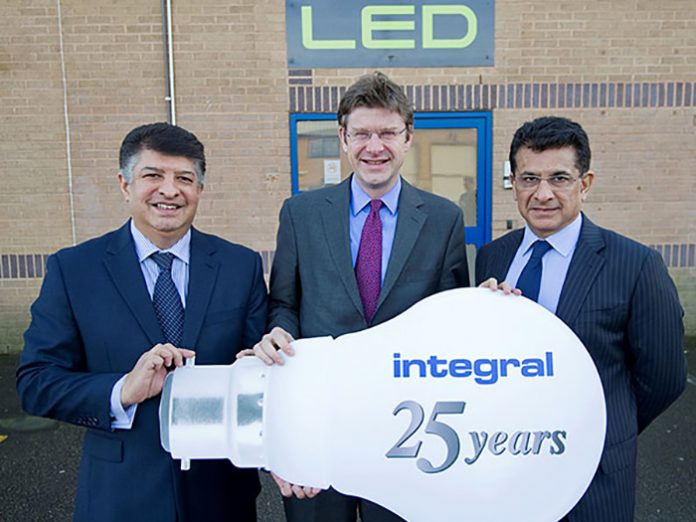 According to Sunil Kotecha, Integral’s MD, an opportunity exists to build a Shenzhen style technology hub in Brent, North West London based on the demand for innovative energy saving lamps that are quickly replacing other forms of lighting.

During Integral Memory’s 25th anniversary celebrations, Rt Hon Greg Clark MP, Minister for Universities, Science and Cities (who officially opened a new LED Lighting Laboratory facility which is part of a package of new investment planned by the company to meet a growing demand) acknowledged Integral’s achievement of staying at the top of a fast moving technology markets for many years.

“Integral’s success is based on its agility to spot and respond to opportunities in a fast moving marketplace. The future demand for energy saving lighting is a key growth sector that both rewards the customer with lower energy bills whilst providing energy savings and helping our ability to achieve lower carbon emission targets,” said the Minister.

Within a series of keynote addresses at the launch event, speakers called for further investment to provide the essential training and skills required to meet the challenge of the global green technology market.

“As a government we have a responsibility to companies like Integral to ensure that the skills are available to ensure continued growth. The recently announced science and innovation strategy is designed to feed that need.” continued the Minister.

Referring to his early days as an engineer, Kotecha observed that opportunities for new graduates were fewer than in the mid-eighties when he entered the job market.

“As an experienced visitor and witness to China’s economic miracle – I know we have a considerable distance to cover in order to catch up to the level of skills, investment and infrastructure available to our manufacturing competition abroad,” he said. “Our strength as a country is in our ability to innovate. Hence the key to our future lies in nurturing the talent within our Universities and attracting them to fast growing market sectors like LED lighting.”

The future of LED lighting is very exciting according to experts present at the event and according to Tony Howells, Senior Policy Advisor to the Department of Business Innovation and Skills: “Lighting is everywhere and combined with the cost savings available of 60-80% that LED can offer – it is a total ‘no brainer’.

Couple this with a requirement to become less reliant on coal fired power stations and in our critical need to match government environmental targets – the LED lighting industry becomes one of the strategically important industrial sectors.”