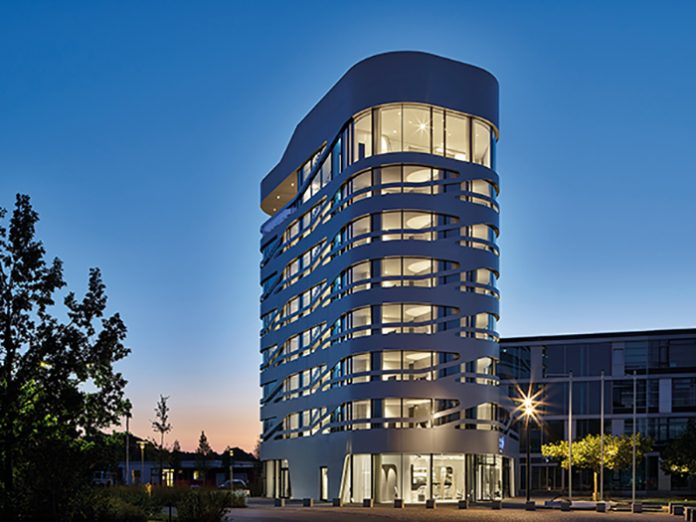 Design hotel IZB Residence, located in the heart of the Martinsried Life Science Campus, stands at an impressive 27-metres high – encompassing seven-storeys and featuring incisive, elegant design. Rising from a triangular floor plan, the IZB is designed as a faculty club serving as a meeting place for guests and scientists from the surrounding research facilities.

Designed by Stark Architekten of Munich, the building is a communicative focus of the campus, comprehensively lit by Occhio. In charge of the lighting design was Occhio’s Helen Neumann, who commented: “The briefing given to us was simply a rendering of the building with its specific façade and the floor plans for each storey. Our first drafts showing the idea of curved ceiling trenches luckily struck with the architect immediately and after a year of refinement the harmonic result emerged.

“Together with Stark Architekten, we developed a lighting concept always keeping the ‘bigger picture’ and all-over result in mind.” With the building’s front embraced by white aluminium strips, the internal lighting concept pursues the principles of connection: architecture, interior design and lighting blend together just as the internal spaces do. When visitors first enter the hotel they experience the continuation of the façade’s dynamics inside, through the reception and restaurant area. The dark suspended and decorative ceiling wells playfully mirror the curved design, while also assuming the function of a chain, onto which 123 surface-mounted Occhio Più alto spotlights are threaded. The rhythmic arrangement of the spotlights and luminaires enables the targeted lighting of the individual zones and at the same time guides the visitor through the space.

“The open floor plan concept for the public areas was supposed to appear consistently in one design,” commented Neumann. “However, the different areas required different lighting atmospheres according to their purpose. We had the idea to design ceiling trenches that thread the luminaires like pearls on a string meaning they could be distributed among the space and create a calm ceiling view. Theses trenches became one of the signature features of the building.

“With the combination of LED and low-voltage halogen the different areas could be lit accordingly to their purpose by keeping one consistent luminaire design.” Covering the first six floors of the IZB are twelve junior suites and 24 rooms, in which diverse areas of usable space are seamlessly interconnected and equipped with Occhio’s universal lighting. The workspace in each room is lit by a Sento tavolo table luminaire (42 in total), while the headboards are lit by a Sento letto wall luminaire (again, 42 in total are used). Where sitting areas are featured, a Sento lettura floor luminaire lights the space; and 36 of the rooms feature a Sento filo suspended from the ceiling into the room.

Along the hotel’s corridors, the walls are shaped with Duna shape spotlights marking access to the lift, helping to orientate the guests. At the same time they form a symbolic tree trunk through the entire building, right up to the top storey where the Faculty Club G2B (Gateway to Biotech) – the centrepiece of the building – is found. This 170 m² club room, with modern furnishings and a view of the Alps, serves more than 600 professors and some 100 managers and CEOs of the IZB on the campus, acting as a place for communication and the interdisciplinary interlocking of people and their ideas. The first member of the G2B was Professor Edvard Moser, winner of the Nobel Prize in medicine 2014.

The open ground plan of the club, which stretches across the entire story is divided into different function areas and includes a spacious bar area creating an inviting atmosphere for discussion, while high seating elements providing a private framework for gatherings, and a private dining area is available for business meals. There are 85 Duna shaped spotlights trailing across the ceiling – randomly arranged and providing functional lighting for the diverse areas, echoing the principle of the melding of architecture and lighting.

Concluding, Neumann added: “The greatest moment for me was seeing the building during the construction phase and then again after completion. Suddenly all the virtual pictures and 2D plans turned into reality and you could literally feel the harmony that emerged. A beautiful, organic and puristic interior with a very welcoming and sensitive ambience was achieved.”