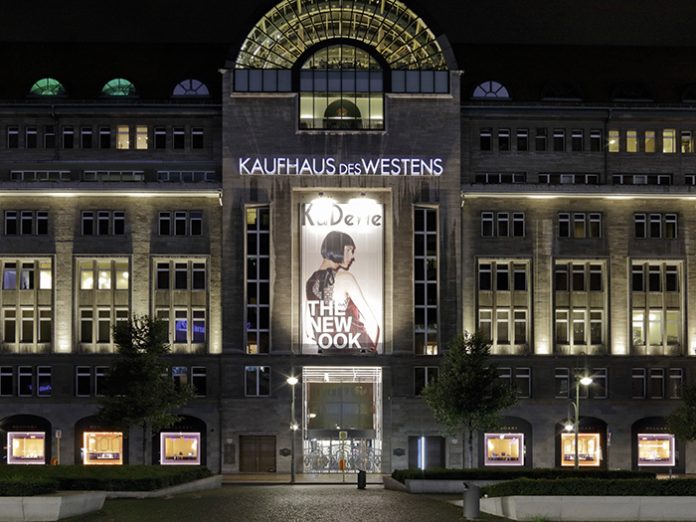 The department stores Kaufhaus des Westens (KaDeWe) in Berlin, Alsterhaus in Hamburg and Oberpollinger in Munich is being gradually revamped by renowned architects over the coming years. Oberpollinger has already held an opening party for its new concept store ‘The Storey’ last October. With the openings of Berlin and Hamburg’s first redesigned sales areas on November 15 and 16 2016, respectively, the remodelling sequence has finally begun. In all three of the KaDeWe Group’s department stores, Licht Kunst Licht has provided bespoke lighting solutions that underline the quality of the sophisticated retail spaces and promote exclusive shopping experiences.

One of the major challenges for Licht Kunst Licht in designing the lighting scheme for three traditional department stores was to provide a holistic concept that responds to the wide range of retail environments with high-end brands aiming to outdo their competitors and satisfy their customers’ expectation of an appealing and stimulating shopping experience. Furthermore, the lighting solution was required to remain appropriate to the existing store locations and utilise lighting’s most state of the art technologies. All renovations were to be done without affecting store operation hours.

Rem Koolhaas and OMA’s Rotterdam Office has developed an extraordinary concept for the over 100-year-old building that houses KaDeWe Berlin’s new shopping environments. Contrary to the horizontal structure commonly found in department stores, KaDeWe will be organised vertically, dividing each floor into four different quadrants. Each quadrant is distinguished by its own independent interior design. The new building layout serves to facilitate its visitors’ orientation.

Licht Kunst Licht has developed the lighting concepts for two of the newly designed quadrants. The sensible design by Milan based interior designers Storage Associati is underlined by the use of linear lighting systems within the Men’s Shoes and Accessories merchandise areas on the first floor. Spotlights in black recessed ceiling channels allow the merchandise to be precisely illuminated without calling attention to the lighting equipment, while the graphic appearance of linear brass fixtures running perpendicular to the ceiling channels is both bold and memorable.

Iconically designed by French designer India Mahdavi, a graphic ceiling consisting of repeating light coves is the defining element of the second floor’s Women’s Designer Fashion retail area. Linear indirect light coves run across the entire ceiling and create a soft general light with a warm light colour. Adjustable fixtures are built into the narrow beams between the coves and cast accent lighting onto the designer goods.

The ten shop windows along Tauentzienstraße were also remodelled, their restored round arches being reminiscent of the building’s original design. The renewed eight-metre tall main entrance completes the picture; here, the lighting design provides the appropriate atmosphere. Track mounted spotlights trace all sides of the shop windows, unobtrusively allowing to flexibly illuminate the mannequins from concealed positions.

Moving on to the Alsterhaus, Hamburg, the new Accessories Hall’s clear interior concept by Kleihues + Kleihues provides the space with a spectacular makeover. The newly designed main entrance at Jungfernstieg welcomes visitors into a spacious lobby that leads to the newly opened Accessories Hall. This double-height space is the heart of the building – here, luxurious bags and accessories are presented on sophisticated furniture which was specially designed for the Alsterhaus by design newcomer Sebastian Herkner.

Powerful, narrow-beam, ceiling recessed spotlights accentuate and sculpt the luxury products from eight metres above and specifically highlight select targets. Narrow lines of light trace the ceiling panels and fill the space with neutral white light. As a third lighting element, light boxes implement stretched fabric to frame the area of the first floor. The eight-metre high shop windows at the Binnenalster were also remodelled and are now presented in a new light. The artist Sarah Illenberger conceptualised a maritime Craft-Art-theme under the motto ‘High Season’. It conveys the fresh breeze of the new Alsterhaus Accessories Hall.

At the Oberpollinger, Munich, the concept intends to open the ground floor luxury boulevard toward the shopping street, to give the overlapping sales areas a new look and moreover, to integrate a concept store for urban wear on the basement level.

As a creative partner for ‘The Storey’ on the basement floor, the architectural studio Gonzalez Haase AAS has created an urban atmosphere with a stylish hand. The rough, partly open ceiling design is characteristic. A functional grid of 60cm long lighting track segments consistently spans across the entire retail space, conveying an industrial look. Here, fixtures for general and accent lighting can be accommodated to create a balanced mix of horizontal and vertical illuminance intensities. Different lighting colour temperatures were intentionally chosen to aid in thematically zoning and organise the space.

The lighting solutions for the three department stores provide quantifiable benefits regarding energy efficiency and maintenance. Using state-of-the-art technologies for both general and accent lighting, energy savings of approximately 30-40% and significantly longer maintenance intervals compared with the previously installed lighting equipment have been achieved. Meeting the client’s brief in terms of energy savings and easy maintenance Licht Kunst Licht have developed a high-performance lighting grid and kept the variety of different fixture and lamp types at a minimum.

Moreover, the lighting concept of utilising many small light sources with relatively low power consumption (6-12W per light source) and excellent colour rendering qualities (Ra > 90) provides not only for high visual comfort, but also for adequate artistic quality and brilliance supporting the exclusiveness of the shopping environments.