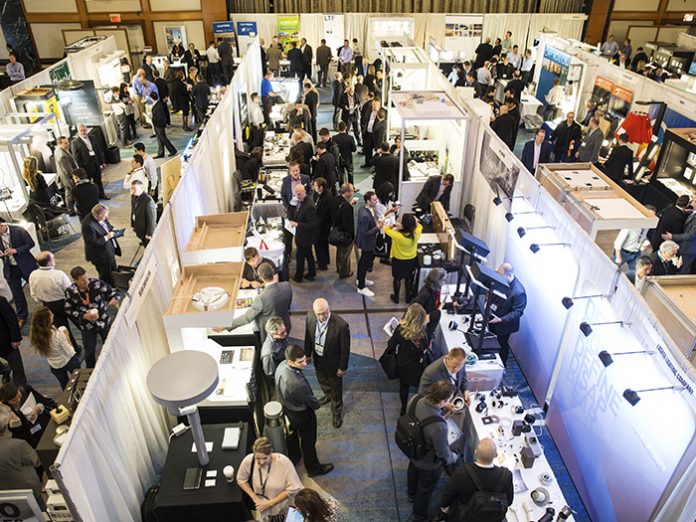 LEDucation celebrates its tenth consecutive show in New York City with large crowds and exhibitor participation to mark a decade of delivering leading educational programs and state-of-the-art technology on SSL.

LEDucation celebrated its tenth anniversary event with a record-breaking attendance of over 4,200 attendees from across the globe and more than 300+ exhibits. The annual event kicked off with a special presentation to the LEDucation founders, Burt Grant, Peggy Meehan and Bob Nadel. The founders acknowledged the expansive growth of the annual event, which started with 30 tables in 2006, has succeeded in part due to the growth of the LED industry but also due to the dedicated team of volunteers from the Designers Lighting Forum of New York (DLFNY).

The unique event has drawn attendees and exhibitors from across the globe for a decade and has expanded its reach from 30 exhibits and 300 attendees in 2006 to over 300+ tables and an audience of over 4,200 attendees in 2016. As a non-profit event, proceeds from LEDucation are managed by the DLFNY to support a variety of lighting industry grants and scholarships such as the Nuckolls Fund and contributions to university lighting programs.

The two-day educational event and table top expo attracted over 2,700 attendees within the first two hours on opening day and closed its final session with over 4,200 attendance over the two day event. As a pre-eminent educational event presented the DLFNY, LEDucation offered a record number of over 30 accredited sessions. Courses covered topics in basics of LED lighting, healthcare lighting, controls, flicker, lighting design, codes and compliance and more. All sessions were designed to offer a versatile selection of beginner, intermediate and advanced courses with the special architectural lighting presentations each morning focused on the Interior Designer followed by a special docent guided tour of the Expo show floor.

As one of the industries largest events dedicated to LED technology, the annual event historically draws lighting designers, interior designers, architects, engineers, students, facility managers, building owners from New York and surrounding areas. Having reached more than 22,000 attendees over a decade, LEDucation has continued to expand its audience by drawing attendees from across the country and has earned its reputation as being one of the don’t miss events in the lighting industry. With leading manufacturers from the United States, Canada, and Europe exhibiting their latest Solid State Lighting technologies and products, LEDucation has superseded its records and has hosted the largest event in its ten-year history.

The anniversary event covered a record 41,600 net sqft of the NY Midtown hotel with an increase of over 3,200sqft from last year. The event featured two exhibit halls, three different sessions rooms on alternating schedules, the return of  “Mission Control” and a special anniversary celebration at the “Light It Up” reception. The exhibition space of 270+ exhibiting companies sold out within one month of opening registration and currently over 70% of LEDucation exhibitors have already pre-registered to exhibit in 2017. Dates for 2017 have been confirmed for 28-29 March, 2017 to return to the NY Hilton at Midtown, NY, NY.