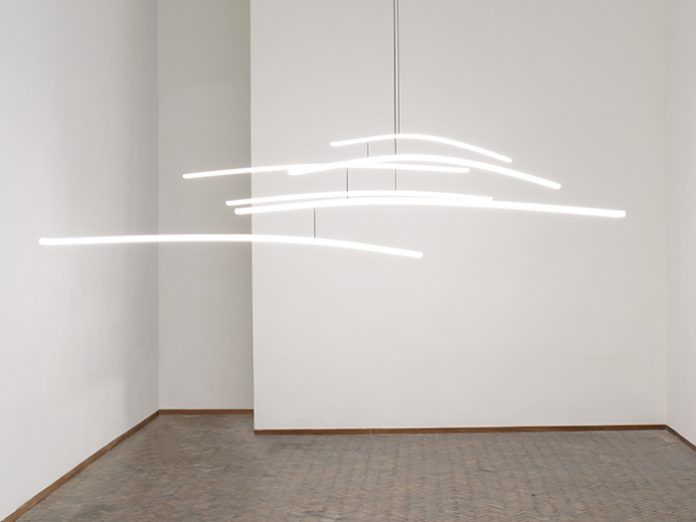 Dutch visual artist and designer Henk Stallinga lives and works in Amsterdam. In 1993 he graduated from the Rietveld Academy, after which he opened his own studio that is co-owned by management partner Annemarie Galani.

Although he doesn’t consider his product designs to be fine art, parts are often transformed into conceptual multimedia installations and sculptures, which exhibit recurring themes such as a minimalistic visual language, light, sound and movement. For example, the Levity exhibition at Gerhard Hofland Gallery in The Netherlands, consisting of the light installation Lumen Balance, the series Breathe In Breathe Out – wherein paintings are combined with tube lights – and the installation A Couch to Match the Painting.

The concepts behind Stallinga’s works are often based on our awareness of the everyday world around us, like sense of time, sonorous and visual perception and experience of energy in the form of light, heat or movement.

In the light installation Lumen Balance, lamp tubes float in the gallery space as naturally moving mobiles. These tubes create various hues of white light, in which visitors can recognise the hourly and seasonal changes in daylight. Stallinga plays with the perception of light by making the viewer aware of the influence that light has on our perception of time and our sense of warmth, simultaneously showing light as an energy that moves.

Light also plays an important role in the series Breathe In Breathe Out. By hanging circular lamp tubes that are strung together in front of a canvas, Stallinga literally frames light. Like a painter he attempts to direct light and dark to achieve a visual illusion. By varying the light’s intensity or by partially covering the lamp tubes, forms and depth optically emerge. The subtle brightening and dimming of the light creates associations with the rhythm of breathing. It is this visual game with physical and optical patterns, realised through ingenious programming and production, that makes the artist’s work intriguing.

Stallinga’s installations are part of several permanent collections, including the Museum of Modern Art in New York, Fonds National d’Art Contemporain in Paris and the Stedelijk Museum in Amsterdam. He is currently working on a major solo exhibition in Japan that opens in 2017.