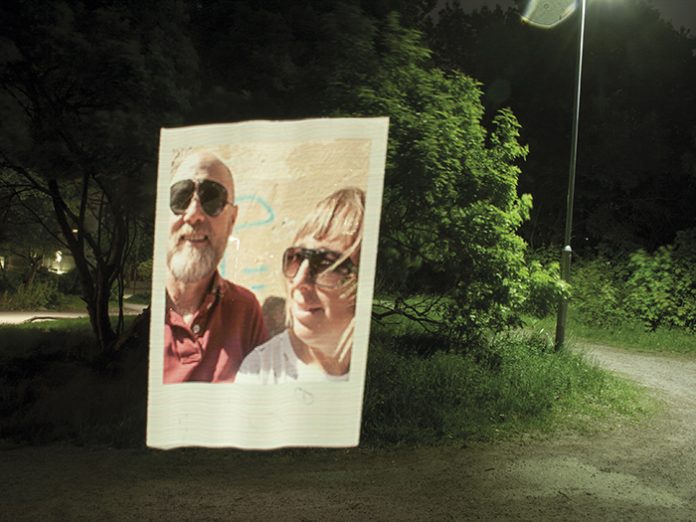 Light Collective are a bit of an enigma. Deliberately so. When they started out six years ago they thought it best to be cagey as they hadn’t quite worked out what they planned to do – they always knew what they didn’t want to do but that’s another story.

Light Collective consists of Sharon Stammers and Martin Lupton and is based in the UK, but their unique philosophy has seen them travel to most corners of the globe. Referred to variously as the ‘Daft Punk of Lighting’, ‘Light Collectors’, ‘Light Evangelists’ and (less flatteringly) ‘the Kirstie and Phil of lighting’, it’s hard to pin down how the practice works but work it does, as the pair pop up in the most unlikely of places, initiating the most unusual of projects.

Despite a secret portfolio of design work that spans private houses, shopping centres and hotels in the Middle East, Light Collective are much happier to talk about projects that see them providing opportunities for their peers or spreading the word about light in the wider design community and amongst the general public.

“When we set up Light Collective we took a deliberate decision not to work in the way other lighting consultancies work. We wanted our company to give us opportunities to collaborate with other designers and friends around the world. We looked at the conventional model for a lighting practice with its typical pyramidical hierarchy and decided to do the opposite. We decided not to have an office and not to expand. People said it would never work… but six years on there are still just the two of us, working wherever we travel.”

The kind of projects that unite the lighting community are ones where Light Collective create an opportunity for other designers to showcase their work and create a platform for the lighting industry to talk about light not just to peers but to the wider world, something that is often lacking. One Beam of Light was a photography competition that allowed 350 designers to be involved, resulting in a public exhibition at the ICA, London and Play of Brilliants was an exhibition in Paris that presented thirteen pieces of light art in a three month show. “Curation and initiation of ideas of this type allow us to present the work of others and show the public that what we know about light as a professional community is worth sharing.”

Light Collective are also big on community engagement and have produced projects where the general public help present a project based on light. This style of working has led to guerrilla events all over the world and the sort of interventions that have engaged 1,000 passers-by in New Zealand or 250 students with mirrors in Singapore. Education about light is a key to the Light Collective philosophy.

Light Collective could also be considered to be an underground consultancy as they are often content to quietly be the team behind an idea. Their logo can be seen subtly gracing many an event and going unnoticed by attendees. Maybe you attended the balloon party in Madrid, paint throwing in Copenhagen or one of their secret colour dinners around the world?

Light Collective are also long standing collaborators of mondo*arc and have curated the back page since 2010, a seven year stint that has created an opportunity for designers all over the world to present their inspiration to readers of the magazine. Their current collaboration is the darc awards with Light Collective as creative consultants to the event. The second round of the awards is in September and attendees can look forward to an even bigger and better event. “The darc awards meets the Light Collective collaborative agenda. It has turned the award format on its head and allowed us to put together a truly creative event that reflects the creativity of our industry. We have been able to involve the talents of many of our contemporaries in order to make this happen. Vote online to ensure you get a ticket.”

If you want to see more of Light Collective in action, check out their new YouTube channel. Its a home for all the films that they have taken on their travels over the last six years and includes videos about light in art, light in architecture, social light, guerrilla light, light events, light and people, daylight, sunlight and any other cool things to do with light that they come across. “Someone once referred to us as Light Collectors and we have been trying to live up to the description ever since. Light Collective TV is our opportunity to share what we have been doing and what we have seen. There are new uploads on Tuesdays and Fridays. We would love it if you would subscribe and share.”