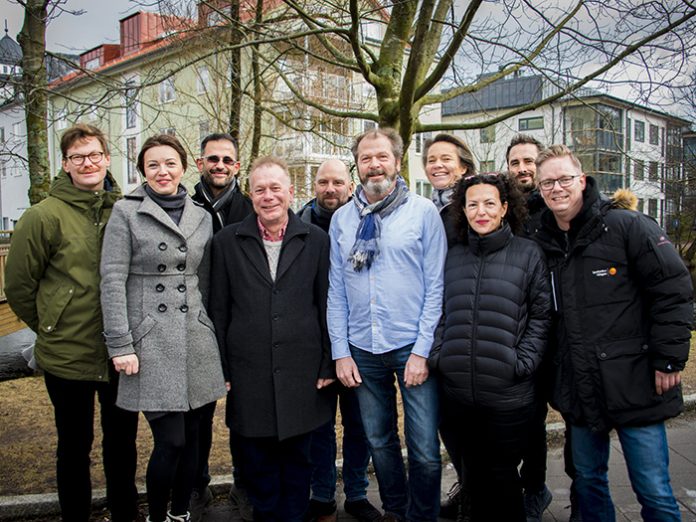 This year’s lighting designers and workshop leaders recently visited Sweden to prepare for the 2017 Lights in Alingsås festival. They are nine experienced design professionals from almost every corner of the world – Australia, Spain, Mexico, the Ukraine, France, Norway and Sweden.

“It’s here in Alingsås that my career in lighting really took off, so it feels great to be back,” said James Wallace from Australia.

“After my visit in 2005 my career as a lighting designer really took off, and since then I’ve done a lot of exciting things. So I’ve got a lot to thank Alingsås for, and then of course it’s a great festival in a really nice town. You can certainly say that I’m glad to be back,” added Wallace.

The theme of this year’s festival won’t be announced until later this spring, but already the nine designers are here to get an idea of how this year’s workshops will function, and receive some advance information so they can start to fire up their creative processes.

“We’ve made a beginning and naturally, it feels great. As I’ve said before we’ve got some front runners with us this year and I’m expecting some great results,” commented project leader Angelica Larsson.

This year’s lighting designers are as follows:

James Wallace is one of this year’s most well-known and experienced lighting designers. Back in 1979 he gained qualifications in lighting design from the Regency Institute in Adelaide, Australia.

His first year at Lights in Alingsås was 2005 when he was a team leader, but he has also paid other visits to the festival in different capacities.

Wallace has held many positions at membership, representative and board levels, for various lighting design organisations, including the PLDA (Professional Lighting Design and Application). He has many years of experience and is one of Australia’s most respected names in lighting design, not least because he has initiated training programmes in the subject.

Normally, Lisa Elbaz works in Madrid as director of the Master’s programme in lighting design at the Institute for European Design.

As a workshop leader her experience is extensive and impressive, including time spent at lighting festivals in Mexico, Greece and the highly-regarded Architectural Lighting Institute in Lyon. Even if she is a well-known name in the world of lighting design in Europe, this is the first time that Elbaz is acting as a workshop leader for Lights in Alingsås.

Lebrun is not a stranger to Sweden, as he studied lighting design at KTH in Stockholm. He left the capital in 2007, and since then has done a number of things and been commissioned by various exhibitions and projects. He also has several prizes under his belt, including the Live Design Excellence Award for his contribution to “The Wall of Sound” in Switzerland in 2012.

Miguel Angel Calanchini is one of Central America’s most interesting lighting designers and his work has attracted much attention during his almost twenty-year career in the field. He has received a prize at the prestigious darc Awards, and addressed international lighting conferences.

The exciting Appelong and Bergström duo come from Norway, where Bergström has made a name for himself in lighting musicals, shows and other types of events. He can be said to be one of the most experienced lighting designers in this area in Scandinavia today. He and Appelong will work together to create interesting lighting ideas for this year’s Lights in Alingsås festival workshop. Appelong has a background in interior design along with twenty years of experience in lighting design, and has specialised in compositions consisting of both natural and artificial light. What all these years of experience will result in on this year’s Light Trail, we can as yet only imagine.

Veronica Chernets is Ukrainian but now lives and works in Australia. She has previously managed the lighting design team at LedLife in Kiev and has been employed on a number of different lighting projects and installations, including work for the international airport at Kharkov. She gained her qualification in lighting design in 2004 and is a name to watch for the future. This is the first year she is participating in the Lights in Alingsås festival.

The only entirely Swedish team this year consists of Simon Malmström, light designer and Magnus Almung, architect. Working as a team their work complements each other’s, and their joint experience is impressive. Both work for Tengbom architects in Gothenburg and they are both previously acquainted with Alingsås.

Every October since 2000, world leaders in lighting design have come to Alingsås, Sweden, to light up central parts of the town. The facades of cold, anonymous buildings are transformed into warm, colourful surfaces while lakes can become futuristic landing strips.  These new light oases create inviting new places for town’s people – and tourists  –  to meet.