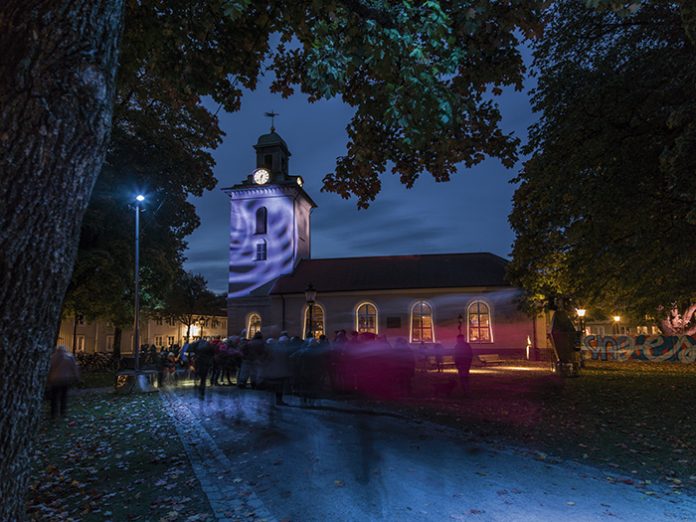 With this year’s installations attracting approximately 70,000 people, Lights in Alingsås brought the small Swedish town just outside Gothenburg to the forefront of lighting design for the seventeenth time.

Following last issue’s workshop coverage, the 2016 Lights in Alingsås festival has now been and gone for another year. As previously mentioned, this year, the Light Trail was made up of light installations from seven teams. These seven teams were led by eight lighting designers from Sweden, Italy, USA, England, Spain, Germany and Belgium, and made up of 58 lighting students from across the whole world. Keen to learn, these students travelled from Israel, France, Iran, Turkey, Sweden, Switzerland, Spain, Australia, India, Greece, Chile, Norway, Brazil, Italy, Mexico, Indonesia, Argentina, South Africa, Ecuador, Albania and Egypt to take part.

Now in its seventeenth year, approximately 70,000 people went round this year’s Light Trail. The trail was roughly two and a half kilometers long and 2016 was only the second time in the history of Lights in Alingsås that there was snow on the trail, with the last time being 2002.

Every year a device is placed to register everyone who walks the Light Trail in the evenings. This year it was placed in Brunnsparken.

With the data collected, it became apparent that the Light Trail guided tour took around 90 minutes and approximately 5% of those who walked the the route chose to go with a guide.

This year saw 22 active guides lead some 190 tours, walking a total of 475km during the five weeks of the festival.

New for this year, five ‘lighting conductors’ drove a small train called the Light Express around the installations on a total of 72 trips.

The product of the team’s hard work throughout workshop week – the light installations that made up the trail – had the job of highlighting the UN’s goals for sustainable development. In total, seven goals were represented on the trail this year: 1, 5, 10, 13, 14, 15 and 16.

Alongside the main installations, additional highlights decorated the trail. Specifically, children from Alingsås pre-schools and schools created their own installations that showed their own interpretation of this year’s theme. Located at Galleria Storken, and in collaboration with Sparbanken Alingsås, Estrad, Komtek and Galleria Storken, their exhibition showcased a younger person’s view of the UN’s global goals.

After decorating the small Swedish town for another five-week stint, the Lights in Alingsås festival has once again showed the spirit of community and the power of collective effort. Visitors came from far and wide to experience the thought-provoking installations and to learn more about the importance of protecting our environment with a little help from light.

As a media partner, mondo*arc was lucky enough to experience the hard work first-hand and the festival’s important message – big problems can be solved from small beginnings.