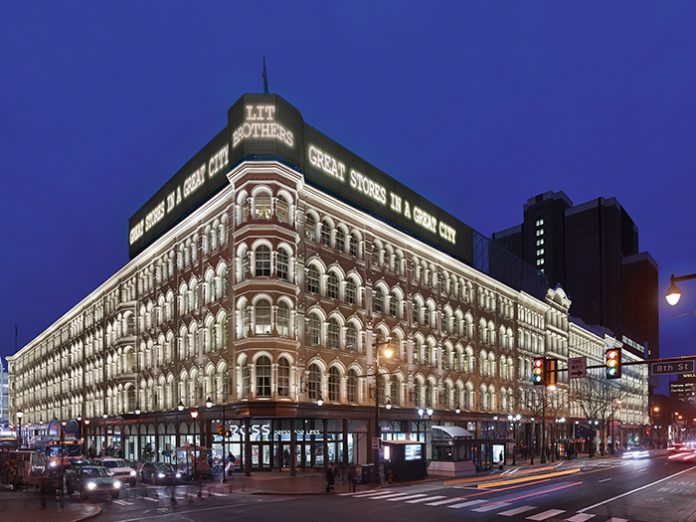 Paying respect to its Victorian architecture and contributing to the revitalisation of the city, The Lighting Practice’s illumination of the Lit Brothers building in Philadelphia, USA uses the latest in LED technology to bathe the grand façade in a variety of vibrant hues.

Composed of approximately 33 buildings, the Lit Brothers building is the only complete block of commercial Victorian architecture in Philadelphia, USA and as a consequence was added to the National Register of Historic Places in 1979. Philadelphia-based lighting design studio The Lighting Practice (TLP) was tasked with highlighting the façade and other historical features, specifically the classical arch windows.

TLP’s design embraces the elegance of the architecture and uses an LED lighting system with colour-changing capability to highlight the fine details in the façade.

“Approximately four years ago we were approached by the architect, an existing client of ours, who was leading the digital media and public improvement design effort, to photograph the building and assist in the development of façade lighting renderings,’’ said Michael Barber, Principal, TLP.

“That work never happened. For nearly two years we were left wondering what had come of the project before we were we asked to interview with the owner in 2014. We were competing for the project this time around, and after waiting all this time, were determined to win the commission. Our drive and passion to light the Lits Building was evident to the owner and we were awarded the project.’’

Barber added: “While the building appears to be one cohesive mass it’s actually a number of buildings, constructed of various materials, stitched together. The seemingly repetitious details have subtle differences that required acute attention; this was further complicated as there was limited documentation available.’’

In total, 504 window openings are illuminated with linear RGBW LED luminaires mounted at each sill, painting the façade canvas in light. Custom enclosures painted to match the building façade shield the fixtures from view and allow them to appear as part of the window sills.

Each window and pilaster is individually addressed through controls that are provided by a Pharos LPC DMX control system with secure remote access from anywhere in the world. This allows the client to adjust the lighting at a moment’s notice for holidays as well as major events. For example, after the attacks in Paris, the building was able to quickly display the French Tricolour to show support and solidarity with Paris.

During the design process, a full-scale mockup was performed to study beam angles, intensity, fixture lengths and locations. In addition, TLP worked in close cooperation with the City’s Historic Committee, ensuring the building’s fabric remained true. With this in mind, power feed penetrations through the building were only allowed at the second level windows, so cables needed to run along the outside of the building. Furthermore, custom white cables were used and runs were coordinated extensively with the project architect and reviewed by the Historic Committee during construction.

As the façade materials between each building consist of cast iron, stone, sheet metal, and wood, the project required unique mounting hardware and installation techniques. Taking this into account, select pilasters along the façade, illuminated with an RGBW accent luminaire painted to match the supporting bracket arm, add a layer of dimension and balance the illumination. Also, new 3,000K LED lanterns replaced the existing bracket-mounted luminaires.

With proportion, scale and style being studied at length to reinforce the human element at the base of the building, lens materials and finishes were reviewed with the selected manufacturer to ensure even diffusion of the LED source.

While envisioned in incandescent white, the RGBW system provides a myriad of colours and hues. Therefore, the dynamic nature of the specified luminaires supports the client’s vision and potential retail clients’ branding and marketing needs.

Catering for potential marketing needs and with the implementation of the new rooftop signage, attention was drawn away from the building’s ornate façade. TLP addressed this so that, “the new lighting wasn’t just vital in helping balance the building, it was vital in creating a resurgence in the surrounding neighbourhood,’’ explained Emad Hasan, Associate, TLP.

“The East Market Street area was once a thriving part of Philadelphia but eventually went out of style. Only in the past year has the city seen development proposals come to fruition. The Lit Brothers Building is the first of many projects that are helping to create a resurgence in the area.’’

Throughout the project, TLP’s intent was to provide a lighting solution that would balance the building with the signage, accentuate architectural features, and become a beacon of the neighborhood, all while respecting the historic fabric of the building. “I know this might sound cliché, but to achieve this we worked closely with the design team and owner to think through each nuance of the design, and kept the Philadelphia Historic Commission updated as the design developed,’’ commented Hasan.

“The Historic Commission was invited to attend mockups and review the construction so that we could address any concerns they had. This collaborative approach allowed us to achieve the design intent.’’

Working to incorporate lighting into such a historically significant building was a significant challenge for the TLP team.They worked closely with the design and construction team to develop details for mounting luminaires to the various window sill materials. Additionally, due to the fact that it was only possible to have power penetrations through the second level, the luminaire manufacturer was able to provide custom cabling, which was then mounted along architectural features.

“This method allowed the cabling to appear as shadow lines in the daytime and become virtually non-existent,’’ continued Hasan. “Lastly, we needed to ensure that the exterior illumination did not impact the tenants. Through mock ups, we were able to determine the appropriate beam angles and fixture aiming to ensure there was minimal spill light into the occupied spaces.’’

Having completed this project during a time in which LEDs are so prevalent, TLP has provided a solution that is both flexible and technologically advanced. When asked if he would have approached the project in a different way, Hasan responded: “I walked by this building for years on my commute to work and often wondered how to light it. Maybe, if we could have used tiny luminaires powered wirelessly we would have gone that route, but unfortunately that’s just a dream. In the end, we are extremely pleased, as is our client. You can’t ask for more than that.’’

Barber concluded: “Our client was truly remarkable; his support of the design vision was unwavering. He was engaged in all aspects of the project from design, participating in meetings with the Historic Commission, through construction, climbing scaffolding to review paint finishes and cable runs. It was a real pleasure working with him and his team. Our office looks down on the Lits Building, so when you can experience your work every day and know that it enlivens the urban experience and contributes to the revitalisation of the city, it’s a great feeling.’’

TLP has provided a considerate and inspiring solution for the historic Lit Brothers building, highlights the beauty of Victorian archictecture.