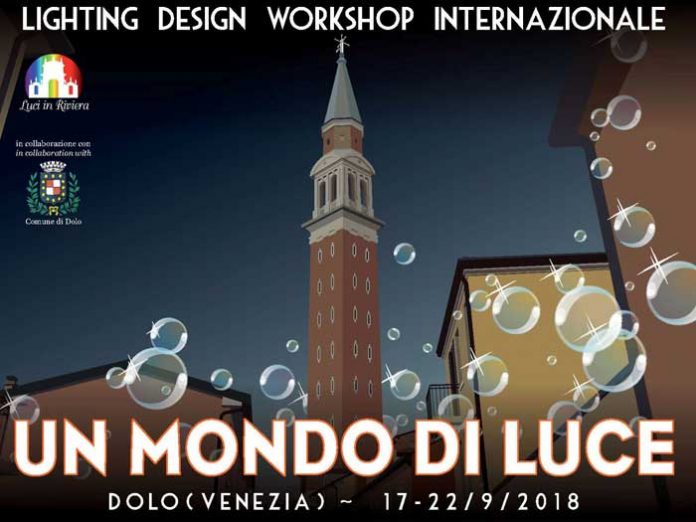 (Italy) – Registration for the third edition of the Luci in Riviera officially opened on 23rd April.

In collaboration with the Municipal Administration of Dolo, the Italian educational event is aimed at providing theoretical and practical knowledge in lighting design to complete a full-scale project under the guidance of professional lighting designers.

The inspiration behind Luci in Riviera is to explore the cultural heritage of the Riviera del Brenta (the waterway that unites Padua and Venice), through a variety of light installations. With aims to boost the tourism in the Riviera area, the project openly invited local residents and tourists to join in the spectacle.

The interest generated during the lighting workshops in 2016 in Stra (VE), the first of its kind in Italy, was unexpected. With more than 3,000 attending the event to see the installations, locals were pleased with the results and impacts on tourism and in turn, the technical sponsors were eager to confirm participation for the following year. The event was widely publicised through the local press and blogs, which was rewarded with multiple partnership offers and participation requests from Italy and abroad. Another notable outcome was through the event’s participation and shortlisting in the darc awards / architectural 2017, as the only Italian entry in the ‘Event’ category. When another town on the Riviera del Brenta showed interest in hosting the lighting workshop in 2017, the decision to raise the quality of the event and open it to the world was a natural progression.

Dolo is a small town in the Venetian Province and is rich in history and beautiful architecture that harks back to the Venetian nobility, portrayed by famous painters such as Bellotto, Canaletto and Guardi. In collaboration with the Municipal Administration, the motto #luccicandoinsieme has represented the meeting point between different realities, i.e. the Parish of San Rocco and the wonderful volunteers of the local Elderly Centre, which are untied all together in encouraging a new way of doing culture and tourism promotion.

During the 2017 event, the selected workshop heads were:

The seventeen participants were able to choose their desired workshop leader who presented their shared philosophy of light, and were then divided into groups to start the concept work, developing and sharing design ideas. During the night, tests on small mock-ups, in both public spaces and historical buildings, were performed.

Each concept and design was then presented to the each other, the public and the event organisers (who adopted the role of the ‘client’), in order to receive the client’s approval and to challenge the task of public speaking to defend their design and receive constructive feedback. The installations were then completed and installed into their designated sites; masking public lighting with coloured filters, disguising luminaires in foliage and in turn, temporarily modified the face of the town with playful materials, recreated textures of footpaths and hanging objects of reflective material, all to capture the attention of visitors and passers-by.

Each installation was realised, taking into account human perception first, following the principle that good lighting does not mean using too much light. Creativity, ideas and attention to details reveal concepts that tell a story using words as light and colour.

“Walking in the street of memory”

“We wanted to re-create the idea of ​​passing time, in contrast to the gloomy and sad atmosphere of the nearby cemetery. We chose to recreate a walkway that connected different scenarios, representing the different phases of the day, as well as the phases of human life. Each scenario was represented by a color. Dawn symbolised childhood, morning represented adolescence, the sunset was middle age and the starry night was old age”.

“We wanted to create a warm and welcoming space for the proud residents of the garden houses and occasional passers-by. We used the power of light to turn the space into a living room and brought it to life at night”.

“A square that is more a passage zone than a domestic one, with four trees in the center, which people pass through without bothering them.

These trees were the main concept of our project, or the symbols of the seasons. We tried to use special lighting, even with objects for each tree, that inspired the idea of ​​a single season.

Due to the nature of this area, passersby could have fun with their coloured shadows and fantastic colourful symbols on the ground”.

“Journey into the Memory”

“Centuries ago, famous people made a memorable trip from the hometown of Marco Polo to China. Two different cultures have been linked by this extraordinary journey. In memory of these daring and courageous people we started our special trip to Dolo. Here we created the illusion of big ships that enter Dolo and that will evoke an intense memory of the city’s past in people “.

“We wanted to fill this street with a party of lights and colours. The circus was a metaphor for the game of life that found its leading actor in the tightrope walker. The swing became a symbol of balance in a continuous passage from being a child to an adult, in a party of emotions”.

Notably, the programme of events was dedicated to educational and social issues i.e. adult disability care centres who have used the installations as backgrounds for their annual show.

Small, temporary, connecting installations were created in order to make recognisable pathways between each site. Guided tours Alla scoperta della notte took tourists and residents between the installations and notable touristic places in Dolo. An experimental laboratory exhibition It’s not illusion but perception focused on the science of human vision. The children’s most anticipated event was the BabyGuerrilla. Little guerrilleros were armed with coloured filters and small LED battery-powered flashlights and were tasked with lighting up the town, one site after another, and demonstrated how fantasy and imagination are powerful tools in towns and cities to enhance wellbeing. Navigando sotto le stele – Sailing under the stars was a night cruise that accompanied the luminous installations and allowed tourists to further understand the history and art of the Riviera del Brenta.