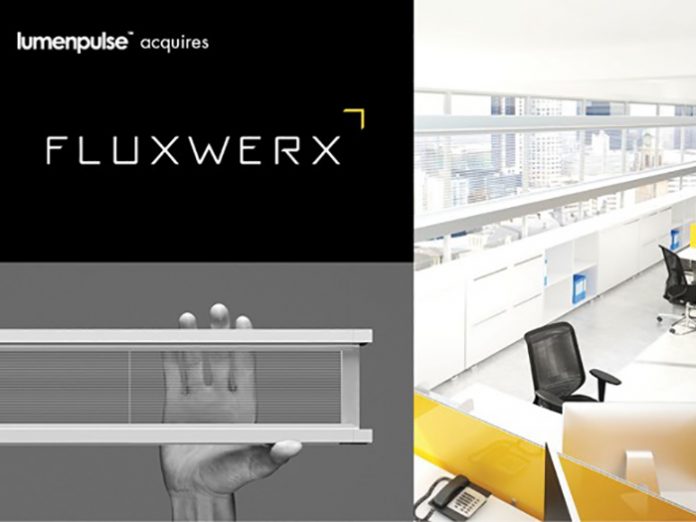 Fluxwerx is a manufacturer of innovative, high-performance, LED luminaires for the general lighting of commercial and institutional spaces, such as office, education and healthcare. Founded in 2011, Fluxwerx has quickly established itself as an LED lighting solution provider, with a distinctive product offering and innovative proprietary anidolic optics technology.

For fiscal year ended December 31, 2015, total revenue was $25.2 million compared to $9.6 million for the prior year. The company’s trailing-twelve-month total revenue for the period ended February 29, 2016 was approximately $27.8 million with a reported EBITDA of approximately $5.4 million. Annualising the Company’s most recent three-month performance prior to close, revenues were approximately $34 million. Going forward, it is expected that the EBITDA margin contribution of Fluxwerx will reflect incremental investments in the business to support its integration and growth. Management expects this transaction to be accretive on an earnings-per-share basis in the upcoming fiscal year beginning May 1st 2016.

“The merging of our organisations represents a major milestone that we believe will be transformational for the Lumenpulse Group, creating one of the most exciting and innovative companies in the LED lighting industry,” said François-Xavier Souvay, President and CEO of Lumenpulse.

“Fluxwerx has achieved impressive growth and market adoption by combining minimalist product design with an innovative, proprietary anidolic optical technology. In fact, they will be launching three new product lines late March. We see a great opportunity for cross-technology synergies that will provide a remarkable value proposition for our clients. We will also benefit from Fluxwerx’s experienced management team, which shares our vision of becoming a world leader in the LED lighting market,” concluded Souvay.

“We have the utmost respect for what Lumenpulse has achieved over past few years. The company, through a combination of innovative technologies, its extensive product portfolio and strategic acquisitions has become a clear market leader and we are looking forward to joining forces as shareholders of Lumenpulse and active members of the executive team,” said Tim Berman, President of Fluxwerx.

The initial consideration paid by Lumenpulse consists of an upfront cash payment of $36 million, the issuance of Lumenpulse shares for an aggregate amount of $20 million (based on a price of $15.78 per share) and a cash holdback of $4 million to be paid approximately one year after closing. The upfront cash payment was financed with available liquidities.

The transaction is subject to post-closing adjustments and to an earn-out payment of up to $25 million, payable in cash or shares at the option of Lumenpulse, based on a linear formula which combines revenue and Adjusted EBITDA targets for Fiscal 2017. The revenue component of the earn-out payment, is based on a range between $43.8 million and $55 million, subject to the achievement of a minimum Adjusted EBITDA.

The Lumenpulse shares issued to Fluxwerx’s management team at closing will be subject to contractual lock-up restrictions as to 100% of such shares for the first year following closing and as to 50% for the second year.