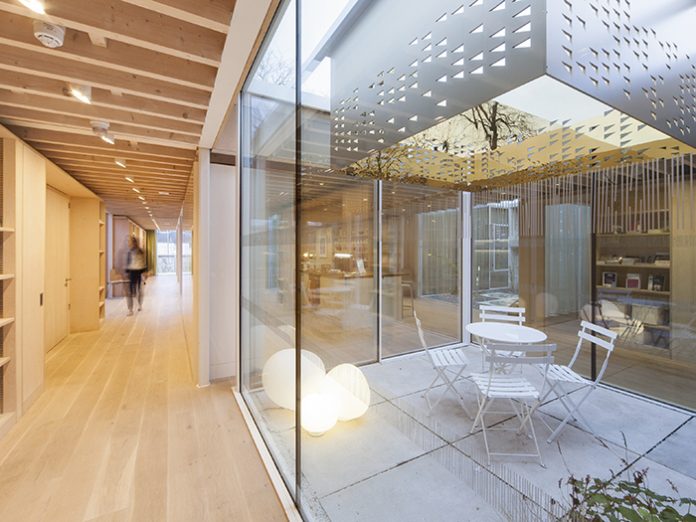 Carrie Donahue Bremner, Design Associate at Speirs + Major, talks to mondo*arc about the dynamism of daylight and its impact on space and environment at Reiach and Hall’s Maggie’s Centre, Lanarkshire.

Speirs + Major was ideally placed to collaborate with architects Reiach and Hall (R+H) on the design of the lighting for the eleventh Maggie’s, located in Lanarkshire, Scotland, having previously worked on the Stirling Prize winning Maggie’s Centre at Charing Cross by Rogers Stirk Harbour + Partners and the Maggie’s Centre in Newcastle by Edward Cullinan Architects.

The building is a long low brick pavilion positioned within a walled garden. It is designed to connect with its surroundings, offering a progression of landscape, texture and light from the entrance path to arrival court, through the sequence of interior spaces and courtyards to the far end walled garden.

Due to the relatively low height of the construction, the daylighting design became  one of the key design challenges. The communal courtyards offered a relaxing space to connect with the sky but lacked a direct connection to light.

“Jonathan (Speirs) originally worked with Neil Gillespie from R+H on the conceptual architectural plan. They discussed the courtyard gardens that bring natural daylight into the centre of the building and considered how this could be reinforced. While these courtyards did allow for some degree of natural light penetration, for this to be properly felt, they realised that the light needed to be made more visible and they needed to find a way to bounce more light deeper into the space.

“Following these discussions, we proposed the idea of a centrally positioned object that would sit within the courtyards and provide surfaces for light to land on and be seen. We knew that the design of the object would have the potential to not only receive light, but to reflect it and allow it to penetrate through. This would bring the scenery deeper into the spaces, and provide a focal point, as well as creating dynamic shadow play. To bring the idea into being, we studied the daylight patterning that would occur, focusing in particular on the effect of the diffuse light, as this can be interpreted by surfaces in many different ways. We were able to confirm that four different kinds of light would occur: direct, patterned direct, reflected and diffuse, depending on the time of year and day, rotating throughout the space.’’

Donahue Bremner further explained: “R+H constructed some small mock ups of the structure and how the feature would sit proportionally within the gardens. Having analysed size, proportion and levels of penetration, we evolved the idea into the elegant, highly polished and perforated gold structures that have come to be known as ‘geode light catchers.”

Originally, there were four light catchers in the four courtyards, however due to cost the number had to be reduced to two in the central courtyards.

“Having just the two in the central courtyards ultimately worked well within the building and strengthened their impact as they are positioned along the main axis of living and movement. This allowed the two peripheral softscape gardens to be a little quieter and more peaceful,’’ said Donahue Bremner.

Although the inner gardens do not have a direct relationship with the boundary brick wall, it is the specialist pattern from this wall that is referenced in the texture of the light catchers. The height, materiality, and reflectivity were also key considerations. The outer surface is finished in a matte effect designed specifically to complement the highly polished interior surface. This matte texture allows diffuse light to scatter across it, creating a glow which is visible from a distance. The polished gold stainless steel interior supplements this glow with dynamic interreflections of direct daylight that bounce in between the faces and escape through its perforations.

The effect on the corridor spaces adjacent to the courtyards is both dynamic and beautiful. On any given day, the spaces appear brighter and warmer thanks to the golden diffuse light bouncing into the space. On a clear-sky day, the cooler crisper direct daylight passing through the perforations creates dynamic patterns, which layer over the diffuse golden light to truly spectacular effect.

Speirs + Major were also responsible for all of the building’s artificial lighting. Given the purpose of the space as a support centre for the family and friends of those diagnosed with cancer, the lighting needed to have enough flexibility to cope with multiple tasks, as well as supporting a domestic level of comfort.

In response to the architectural intent, the lighting marks the progression through the building, focusing on highlighting the major interventions. Light is integrated so that it frames vistas, drawing visitors into and through the building, while reinforcing the connection between inside and outside. Warm light washes the timber surfaces to bring out their inherent warmth, while a second layer of domestic furniture pieces contributes to a homely atmosphere.

The space is used flexibly from day-to-day so a lighting control system was put in place, meaning luminaires could be altered to suit.

The additional daylight from the Lightcatchers allow the artificial lighting to be reduced at certain times of the day, improving the overall energy efficiency.

Maggie’s Centre Lanarkshire is a perfect example of how a well-considered approach to designing with natural light can invigorate an architectural scheme.