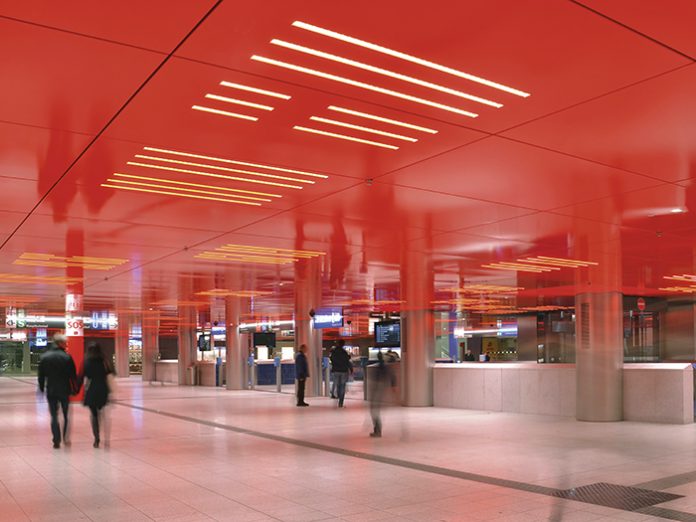 Ingo Maurer goes bold with his lighting concept for Munich’s Marienplatz subway mezzanine, bathing the area in red-orange tones that transform the space.

As you walk down the steps to the mezzanine level of Marienplatz, Munich’s central square, you experience what a fresh lighting design and colour concept can bring to difficult public spaces.

Marienplatz provides access to two subway lines and all of Munich’s suburban trains. On October 26, 2015 it reopened to the public with a new design offering a clear, bright, modern and customer friendly setting.

Having been awarded the project in 2011, the joint design from Allman Sattler Architects and lighting designer Ingo Maurer sees a modern, tactile guidance system with handrail inscriptions in profiled letters and Braille that serve to improve the accessibility for the visually impaired. Additional orientation is provided by safety markings on all glass facades, handrail lights and contrasting materials in the floor and staircase area.

The mezzanine floor at Marienplatz is a new unique room created in the heart of the city. The original, shapeless and vast space has been reduced to elementary rooms with secluded corners and once intimidating areas eliminated. As well as concentrating on public facilities in the counter hall, additional spaces for trade and services have been developed along the passageways to the exits.

The durable natural stone flooring in the counter hall and passageway reflect the light optimally, with the structured silver-gray stainless steel strips of the façade creating additional light reflections. The blue tiling that has existed as a distinctive element in the access routes to the suburban railway and subway platforms since 1971, have been retained – due to their colour they stand out and provide orientation.

An essential element of the design comes from Ingo Maurer’s lighting design, with the ceiling almost glowing in an orange-red tone, reflective of the platforms designed by Baron Alexander von Branca and as homage to the Munich artist Rupprecht Geifer. The lighting adds a unique touch to the space and underlines the relevance of the city centre as a major junction in public transport.

To create this effect, metal sheets lacquered with a slightly reflective finish in a red-orange tone have been implemented. Lines of LEDs – specifically designed for the project by Ingo Maurer – are arranged in groups of three with differing lengths integrated and placed irregularly across the ceiling. To complement the red-orange glow, the light signs, developed by Ingo Maurer and made by Osram, are equipped with LEDs and a diffusor lacquered in the same orange-red as the ceiling.

Throughout the corridors that lead from the mezzanine’s entrances to the central area, the ceiling sheets feature a matte stainless steel finish with integrated linear lights from Pracht, making the room feel more spacious. For the staircases leading up to Marienplatz, LED lighting from Korona Leuchten has been integrated into the hand rails.

As expected, when the time came to unveil the new look of the Marienplatz mezzanine, there were some questions over the bold new look from local press and media. However it would appear that the city officials that a took a leap of faith on such a decision, were right to do so, with what would normally be considered an unforgiving, drab space, coming alive through thoughtful lighting design.