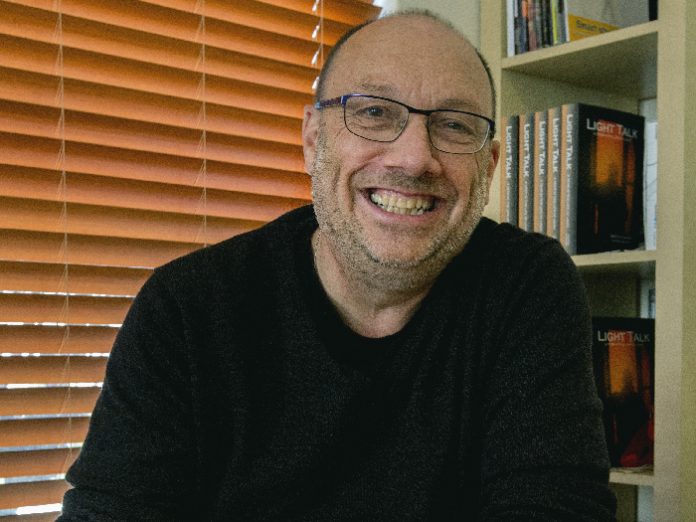 Throughout his long and distinguished career, lighting designer Martin Klaasen has been involved in a long list of iconic projects in Asia and Australia as well as being at the forefront of lighting education in the region.

In the lighting business for almost 40 years, Martin Klaasen, Principal at Klaasen Lighting Design (KLD), traces his ability to manage the ups and downs of his career to the influence of a number of people. Making the top of the list though is his grandmother: Geneviève Dreyfus-Sée. An architect in France, as well as a writer and educator, she has been Klaasen’s biggest inspiration.

“What I most admired in her,” says Klaasen, “was her perseverance, belief in herself and her independence. She did not care what people thought of her, whether she was successful or not. She studied and wrote about the history of architecture because she was passionate about it. She wrote about her experiences bringing up her children during the war, wrote children’s books to share the stories she taught her children, because she believed in it and just wanted to share it.”

And over the past 26 years as his own boss, Klaasen’s own “persistence and belief have always kept me going,” he says. And passion, too. “While I was passionate creating beautiful lighting projects at the beginning of my career, I am now passionate about sharing my knowledge with the new generation,” he says. It is this passion that motivates Klaasen to blog, write articles, and speak at lighting event seminars about “how lighting can be used to improve and look after the world we live in,” he says.

His own contribution to doing that is made through projects mostly in the area of hospitality, commercial, corporate and public building lighting and residential urban developments. “Good lighting design contributes to more comfortable and pleasant environments, easier way-finding, and beautification of the cities we live in,” he says. “Most of all it is the way we achieve it through our sustainable approach, minimising energy consumption, capital and operational costs. Added value creation through good lighting design.”

Over the years, other people have influenced the direction of the award-winning lighting designer’s life and career, too. “Of course I do admire groundbreakers like Zaha Hadid, Jean Nouvel, Philippe Starck,” he says, “but they are not the essential motivators in my life.”

Gerrit van den Beld was, however, such a person. Van den Beld was his boss and mentor at Philips. He taught Klaasen how to pace himself and “how to take things one at a time, sleep on problems rather than react emotionally,” he says. “He was instrumental in forming my lighting design personality.”

Klaasen worked at Philips after graduating with a master’s degree in Industrial Design from the Technische Hogeschool in Delft in The Netherlands. “As I like building and creating things,” he says, “I settled on industrial product design…Industrial design teaches you the process of design, from concept to realisation and till today it has been the foundation of my successful career.”

When Klaasen finished his studies he started to look for a job at Philips, where he had completed his final master’s degree project, which was “designing an intelligent washing machine that could read the laundry and decide the washing program by itself,” he says.

Among the job opportunities on offer to him was one of lighting designer at the Philips Lighting Design and Engineering Centre in Eindhoven.

“I was immediately fascinated by this group of people,” he says, “designing the lighting for Olympic Games, big commercial hotel developments and so much more. I decided there and then on the spot to take this exciting job and never looked back.”

Also making Klaasen’s list of people that have had the greatest influence on his lighting career is American businessman and author Robert Kiyosaki. “He gave me insight on becoming more business savvy,” says Klaasen. “Good designers are not necessarily good business people and I certainly was not when I started my business.”

Klaasen started his own business in 1991, after moving to Singapore in the late 1980s for Philips, who had tasked him to “set up what at the time was called the Support Centre for Professional Lighting in Singapore,” he says.

Experiences and events that eventually motivated Klaasen to leave Philips were an uncertain future at the company and meeting lighting designers Tony Corbett of Anthony Corbett Associates and BAA’s Barry Arnold.

It was only when Klaasen arrived in Singapore and met Tony Corbett did he realise “there was such a thing like an independent lighting designer,” he says. “Inside my protected corporate Philips cocoon, I basically only knew of Philips product and was limited to using their products to design anyhow.”

By 1990 Klaasen’s job future at Philips was uncertain as the company “was going through severe restructuring,” he says. At that time, though, American lighting designer Barry Arnold asked Klaasen whether he was interested in joining him. Intrigued, and because he had been thinking about starting his own practice due to his uncertain future with Philips, he decided to leave the company. However, not to work as an employee of Barry Arnold, but “in a cooperation with my own company [Lumino Design International] which I incorporated for that purpose,” he says.

Things didn’t work out though. Conflicting ideas about how they would be working together meant that Klaasen left shortly after.

Working from home, a few projects that Philips had passed on to him, such as the Sheraton Senggigi Resort in Lombok and the Melia Purosani Hotel in Yogyakarta in Indonesia, and The Raffles Hotel in Singapore, which was in its final stages, kept him going for the first few months.

The company expanded through the 1990s, but the financial crisis in the latter part of the decade drove Klaasen to set up in Perth, Australia, where he bought a stake in a local firm, Lighting Images, eventually taking it over in 2000.

In 2010 Klaasen decided to sell his stake in Lighting Images—“I could no longer identify myself with the direction we were going, quantity over quality of design, so I wanted to regain full control about the artistic and creative quality of our work towards our client,” he says—and rebranded himself as Klaasen Lighting Design, opening for business at the start of 2011.

Since then KLD’s lighting design work has included the Mandarin Oriental Majapahit Hotel Surabaya; the Eastern & Oriental Hotel Penang in Malaysia; His Majesty’s Theatre in Perth; the Atlas Bar at Parkview Square Singapore, and the recently completed Alila Yangshuo Hotel and Resort project in China.

Having been in the lighting business for so long now means that “lighting has gradually become an integral part of my life,” says Klaasen. “I live and breathe lighting and lighting design now. It is a constant in my life. Certainly, as a business owner you need to have a constant eye out for opportunities, to be alert to trends and technology advances, look and learn from what others are doing. This is not a nine-to-five activity. It is a permanent and continuous part of life. We learn from others, good and bad. Over time you learn to appreciate what others do or learn from what they failed to do. It motivates and inspires me to do better.”