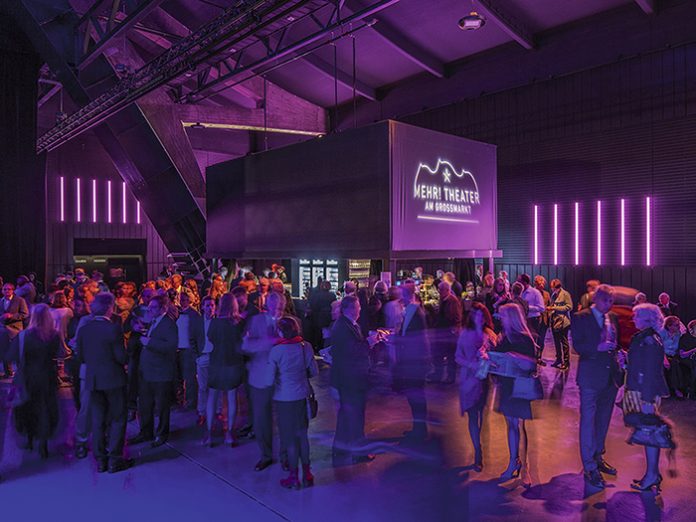 A market hall isn’t the most traditional of spaces for a theatre, but then there is nothing traditional about Mehr! Entertainment Group’s latest venture in Hamburg. With lighting design from jack be nimble distinguishing flexible realms within a historical building, an unforgettable theatre experience has been created.

The Hamburg Grossmarkthalle in Germany was completed in 1962 under the supervision of architect Bernhard Hermkes and set new standards with its futuristic construction of glass and concrete. Today it is under heritage protection as one of the last examples of pre-stressed concrete construction in Hamburg.

In November 2012, the City of Hamburg and Mehr! Entertainment signed an agreement to construct a theatre in a section of the Grossmarkthalle, with the aim of bringing a new cultural site to connect with all of the market’s current merchants and dealers. It is hoped the space will open up to the wider public and feature a sustainable concept and new cultural venue.

The Mehr! Theater is completely integrated and free-standing in the Hamburg Grossmarkthalle. The ceiling structure of pre-stressed concrete arches and its interior height have been respectfully preserved in the architectural design of the theatre, while at the same time, have become an impressive feature in the space.

As part of the theatre’s vision, which is able to hold a seated audience of up to 2,400 people and a standing audience of up to 3,500 – offering a wide variety of possibilities for productions, shows, events, exhibitions and more, architectural lighting implemented at Mehr! aims to distinguish flexible realms within the historical building, adding further to this unforgettable theatre experience. The challenge for the lighting design carried out by Berlin-based jack be nimble (JBN), was to support the open construction design while referencing the historical architecture.

With a published opening concert date set months in advance – including the London Symphony Orchestra as guests of honour – there was no room for delays in delivery and as such it was imperative that JBN met with the construction team early to intercept problems in the planning phase and coordinate the site execution meticulously. Fortunately, the team was able to meet with the architects just as lighting became a topic of interest.

“Our initial involvement was structured as conceptual input, planned to last about a month,” said JBN’s Sophia Klees. “The project grew organically out of an initial sketching session to incorporate nearly every phase of development: concept, design, detailed design, custom-luminaire design, control systems and site supervision. The planned areas also grew to include foyer, cloakroom, stairs, circulation, bar, seating area and lavatories… everything but the stage itself.”

In contrast with most theatres, the auditorium, foyer, and bars were combined into a single open space without separation via partition walls or suspended ceilings. JBN worked to create lighting scenes that differentiated functional areas; guided visitors intuitively; and created the appropriate mood throughout the performance visit. The brief was focused on two specific areas: the entrance / foyer and the circulation areas to the sides of the theatre. Given its unique location, the challenge was to entice visitors into the theatre and beguile them with the interior.

In terms of project specifics, the primary challenges for JBN concerned budget and timing as Klees explained: “We had to find a way of achieving grand gestures with the lighting using a fraction of the budget typically required… We looked at ways to reduce the complexity and therefore cost of the design by minimising the luminaire schedule. We then re-used elements across the design, benefitting from economies of scale.”

A special linear lighting fixture was developed for the project. It evokes the industrial context of the surroundings while employing modern LED technology to reduce energy usage. The lighting element repeats throughout the project using different arrangements and unique lighting atmospheres are assembled forming subtle coherence for the overall space.

Colour temperature played a significant role in the lighting concept and bright white lights in cool colours (6,000K) are used in the foyer for increased visibility at a distance. The industrial character of the lighting is designed to also make a statement that this theatre is different. As visitors step deeper into the theatre the atmosphere becomes more colourful, warm and dim and due to the unique open space, the architectural lighting functions as an extension of the show.

In terms of natural light, as a theatre it has been intentionally limited for most of the spaces. The entrance however, was deliberately opened to allow sight into the building during daylight hours. In the evening, the industrial bright lights of the foyer glare into the surroundings, proclaiming the presence of the theatre. Coloured lighting is limited to the interior, creating a fantastical environment inside the auditorium and circulation areas.

“The lighting scheme had to adapt in response to the expaned brief,” continued Klees, “becoming simultaneously more sophisticated and holistic. The custom linear luminaires create a sense of continuity across the theatre. We introduced a progression in the white lighting, leading from cold, industrial lights in the foyer to warm lavatories at the opposite end. The entire system was joined into a central control panel to grant show designers absolute control over each light point.”

The lighting scheme includes state-of-the-art DMX control gear to modify colour, intensity and position as an integral part of the architecture. A custom touch-panel interface provides access to pre-programmed scenes and individual lighting elements. Additional functionality was provided to integrate the architectural lighting directly into the production controls, enabling the different spaces to blend seamlessly.

Aside from time constraints, JBN had three primary structural constraints to work within, as Klees explained: “Firstly the theatre is housed within a listed building, limiting drilling on existing structural elements and difficult manual installation at height without equipment. Secondly, the theatre was designed with the potential to be deconstructed after 20 years. This meant the lighting needed to be reversible and easily able to vanish after the lease expires. Finally, the flexible layout of the auditorium can accommodate a variety of uses from corporate events for 300 to musical productions with an audience capacity of 3,500. The lighting placement needed to accommodate this flexibility and also create an appropriate environment for events of various sizes.”

Minor delays in the construction phase meant the slot for lighting installation and commissioning was pushed right up until opening night, however after nearly two-weeks of round-the-clock effort the system was declared operational and the doors could open for the show. Fortunately, having been involved throughout the project JBN had tackled most of the technical integration problems along the way, but according to Klees the moment the lighting design was unveiled was a nerve-wracking one for the entire team.

“From our backstage vantage point we saw for the first time the effect of our months of planning and execution as the thousands of visitors enjoyed the concert and opening party,” she said.

“With each project we attempt to create a physical manifestation of our philosophy, embedded in our studio’s name. User-centred design (jack), ideas with conviction (be), and flexible solutions (nimble).

While this project was no exception, for Klees, Mehr! stands out for several reasons: “The opportunity to be intimately involved from inception to realisation was unique,” she said.

“The trust granted us by the architects and the theatre environment meant we could focus much more acutely on the theatrical impression of the lighting rather than strictly the functional; and the grand scale of the space continually impressed, with merged functional areas and a sprawling curved ceiling more than 20m above the floor.”

With a clear design, custom luminaires and flexible set of controls, the lighting design for this unique theatre is certain to take visitors by surprise for years to come.