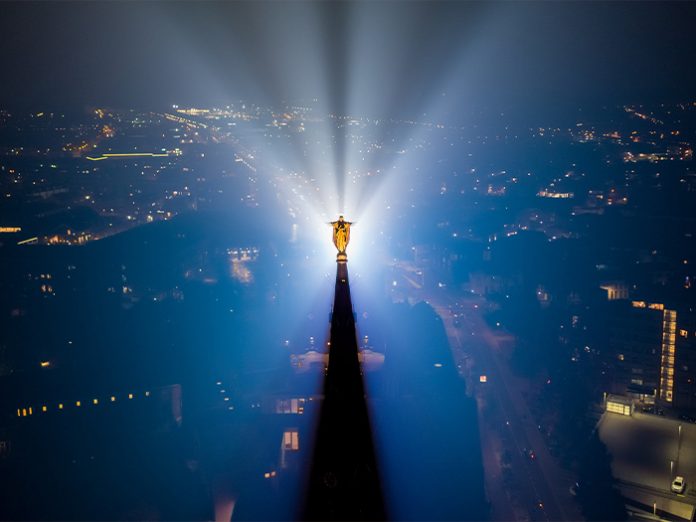 (Netherlands) – More than 580,000 people attended the 2021 GLOW Eindhoven event across seven days, given the theme ‘Moved by Light’.

The event was spread across four different locations in and around the city of Eindhoven, and despite having to end a day early due to new Covid measures announced by the Dutch government, organisers are overwhelmed with the number of visitors.

Ronald Ramakers, Director of GLOW, said: “We are incredibly proud that this edition of GLOW – spread across the entire city – was able to take place thanks to the close collaboration with artists from home and abroad. We have worked together with the municipality of Eindhoven and other key partners to make this event a great success.”

With around 35 light artists from the Netherlands and abroad, the event featured some of the most inspiring and innovative exhibits ever seen at GLOW. The enlarged exhibition area, spread over four sites and two satellite locations – gave both visitors and the light installations more space, while making the event more Covid-19 compliant.

One of the highlights of the event was the Dutch Footprint installation, created on the Ketelhuisplein. On 8 November, children made homemade flower lanterns out of recycled materials and walked a route of five hectares – the size of the ‘footprint’ of an average Dutch citizen. Together with television programme Het Klokhuis (The Apple Core), the installation aimed to show the impact of people on the planet.

Another highlight was Domus Luma at the Paterskerk; with an impressive projection, light and laser show on the outside and the Wish Factory inside. Strijp-S and -T attracted a large volume of visitors also, with Gijs van Bon’s abstract dragon PING adapted in honour of the construction of the Nanjing Pavilion. Gijs van Bon also worked with various ASML engineers on Drop of the Light, another installation that proved very popular with the public.

The theme ‘Moved by Light’ was a topic that captured the essence of the challenges of the past two years – a period that required more resilience from everyone. But Ramakers believes this edition of GLOW was a big success. He added: “Although the expansion to the new locations was a challenge at times, we can definitely say GLOW 2021 was a very successful edition. Local residents and visitors (from far and wide) were surprised, thrilled, challenged and inspired. This year’s light art was often referred to as ‘breathtaking’.”

GLOW Eindhoven will return next year, taking place from 12-19 November 2022.