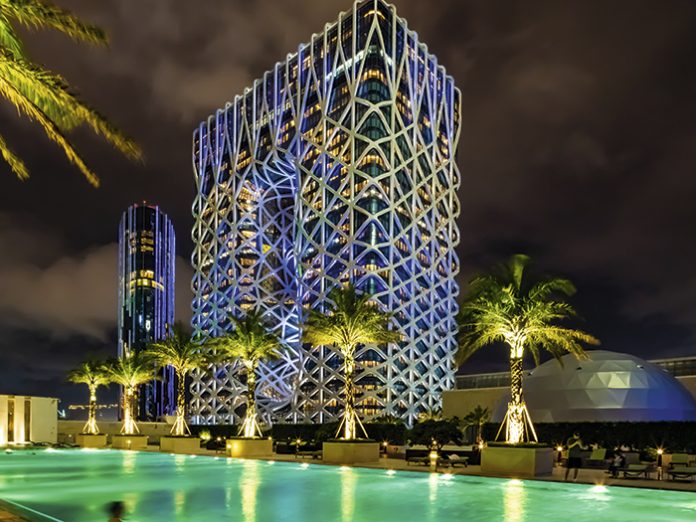 Commissioned by Melco Resorts, Zaha Hadid Architects (ZHA) was tasked with the challenge of creating a hotel space that would stand out from the crowd and dominate the landscape as an architectural spectacle. Now completed, the Morpheus Hotel is set to become an iconic landmark on the city’s horizon.

The gateway building consists of two towers blended together with internal voids through its centre to create an urban window connecting the hotel’s interior communal spaces with the outside city.

Planning began in 2012 when ZHA was initially brought on board to rescue the site of a previously failed project. Foundations for this project were already laid, but access was restricted due to a number of limitations; three sides of the site were enclosed by construction, a high-rise resort hotel was already standing to the west and a six-lane highway to the north. Viviana Muscettola, ZHA’s project manager, explained their design approach:  “Vertical extrusion seemed logical as it addressed the two constraint sets: the restricted footprint and the dense, varied programme. This strategy also allowed Morpheus to be designed as a single tower, but one that contained two internal vertical circulation cores, or secondary towers, horizontally connected at podium or roof level, where dense accommodation was required.

“This generated a simple block, maximising the development envelope with radius edges. The block was then gouged with voids forming vortical urban windows, first one, then two and finally three heterogeneous loops. This gives Morpheus its unique form. Along with the distinctive aesthetic of the voids and the exciting internal spaces, this form also provided more corner rooms, which faced the central voids and had very special views of the atrium space with the potential to maximise yield.”

Inspiration for the unique form of the Morpheus Hotel originated through China’s rich traditions of jade carving. The exoskeleton was designed as a sculptural element to the building and gives it its characterising feature.

Muscettola described the influences in ZHA’s portfolio further: “ZHA has often explored the logic and coherence in nature’s systems when we are working to create environments. This research also includes geological formations that have been carved and eroded by the elements – evident in many of our previously completed projects such as the ‘canyons’ of the Galaxy Soho campus in Beijing. Traditional jade carving is a man-made extension of these natural erosion processes; working with each stone’s unique composition to create intricately carved fluid forms.

“Zaha Hadid originally began studying traditional Chinese architecture and arts, including jade carving, when she first travelled to China in 1981. This ongoing research continually informed her creative thinking, particularly for the Morpheus design.”

The exoskeleton is a unique concept devised by ZHA as a solution to increasing the internal space for the hotel. It also provided an intricate and challenging canvas for Isometrix, the project’s lead lighting designer, to incorporate lighting fixtures.

“Exoskeletons are the structures of buildings placed outside their external envelope. Locating a building’s structure externally frees its internal spaces from supporting walls and columns – creating larger areas for use by visitors and enabling these spaces to be much more adaptable. Low-rise free-form exoskeletons exist elsewhere, as do high-rise exoskeletons that follow strict orthogonal grids. But, our research did not find any precedents for a free-form high-rise exoskeleton,” she continued.

“The complexity of Morpheus’ free-form geometry and irregular exoskeleton, the sheer quantity of construction elements and their many required interconnections was a challenge. Further layers of complexity were added by Morpheus’ 40-storey height that had to comply with Macau’s building restrictions of 160-metres in height, its complex programme of many different functions, the tight schedule and worldwide location of all the different teams in the UK, USA, China and Southeast Asia that had to collaborate seamlessly to ensure the project’s success,” explained Muscettola.

The client, Melco, approached lighting design firm Isometrix in Hong Kong and Arnold Chan, Principal Director of the Hong Kong and UK offices, for consultancy on both the interior and exterior of the building. Nelson Ng, Design Director at Isometrix Hong Kong, explained: “They needed a firm that could understand the aesthetics of ZHA as well as knowledge and understanding of the local culture and prerequisites of running a hotel and casino complex in Macau. Isometrix has studios in both London and Hong Kong and has had very successful collaborations with the ZHA and Melco on previous projects.” He continued to describe the key architectural considerations their team had to factor in when designing a scheme for Morpheus: “The exoskeleton has many free-form structures and integrating small, discrete and powerful light fixtures that could also be adjustable to uplight the morphing shapes within each bay was the main challenge. This involved multiple calculations, studies and mock-ups to develop fixtures with the appropriate beam angles.

“All of the exterior light fixtures are custom made to fit into the façade details with minimal visual impact when seen during the day,” he added.

Isometrix was first informed of the uniqueness and complexity of the building, along with the views and opinions of the client, through ZHA’s first design brief. Ng explained the balance of design and client requirments further: “Our challenge was to develop and create a design that balanced the wishes of the architect, to incorporate light fixtures discreetly and emphasise the forms architecturally, all whilst ensuring the hotel visually stands out from the surrounding buildings, all in line with the client’s aspirations.”

During the installation process, the team was up against difficult conditions along with limited space within the cladding. It was important for the façade to be lit evenly and consistently in its entirety.

Ng explained Isometrix’s working relationship with ZHA and how easy it was to work as a team: “We have worked together on a number of projects dating back to Vitra Fire Station and Home House Private Member Club, Roca London Gallery, The Serpentine Sackler Gallery and developed a scheme for the Chengdu Contemporary Art Centre.

“We were free to come up with ideas and options, with the final scheme being finely tuned and refined after a detailed process of discussion and collaboration with the other project consultants, as well as considering budget constraints.”

Isometrix turned to Creative Lighting Asia (CLA) to aid in their fixtures for the façade. Paul Rees, of CLA, described their introduction to the project: “With respect to the façade lighting, CLA took a design brief drawn up by Isometrix and approached Lumascape Lighting from Brisbane, Australia, to work on two custom solutions that needed to take in both the output and beam angles required for such an organic structure, but also with the flexibility of design to allow them to fit into the very tight space allowances within the exoskeleton.

“After numerous sample submittals and mock-ups, CLA was awarded the supply and installation contract, using two fully bespoke luminaires from Lumascape, both incorporating the PowerSync proprietary technology. One fitting was a nine-watt RGBW horizontal narrow beam product, designed to uplight the underside of each façade section. The second was a 100-watt RGBW floodlight to uplight the external spaces within the central core of the building,” he added.

Ng elaborated: “Working as part of an experienced and skilled team of consultants who helped and supported us on resolving any lighting issues meant we were confident and felt no pressure throughout the duration of the project.”

A recent development in technology allowed all the design and construction teams to work from a single digital 3D model that contained information from every part of the building. The design could be manipulated and altered by any member of the teams around the world, which were then instantly re-calibrated, analysed and checked by a highly automated procedure and available for any member of the teams to work from. Muscettola regarded the new technology as something that will “radically change how we build in the future. The technologies that allowed us to create such a comprehensive digital 3D model of the hotel that combined all of its aesthetic, structural and construction information enabled us to create a building with such complexity as the Morpheus”.

With such an impressive external façade, it was important the interior continued the same standards of impact and design quality. The unique exoskeleton optimised the available space and allowed for a huge amount of adaptability to accommodate the many varying requirements of the prestigious venue. The internal voids of the hotel create an “urban window that links the hotel’s interior communal spaces with the city,” Muscettola commented, with reference to the internal design.

“Three horizontal vortices generate the voids through the building and define the hotel’s dramatic internal public spaces; creating unique corner suites with spectacular views of both the atrium and the city. This arrangement maximises the number of hotel rooms with external views and guarantees an equal room distribution on either side of the building. In between the free-form voids that traverse the atrium, a series of bridges create unique spaces for the hotel’s restaurants, bars and guest lounges by renowned chefs including Alain Ducasse and Pierre Hermé. The atrium’s twelve glass elevators provide guests with remarkable views of the hotel’s interior and exterior as they travel between the voids of the building,” she added.

The atria were particular areas where ZHA and Isometrix had full artistic control. As Muscettola reflected: “There is an inevitable logic to this holistic conformation in the upper atrium spaces, which are enclosed by free-form exoskeleton, macro-windows and faceted windows. But in the lower atrium areas, the three dimensional logic of the exoskeleton and macro-windows is forcibly extended and scaled down, most visibly in the design of the ground floor Pierre Hermé Lounge Bar’s pavilion.”

Working closely with Isometrix in these areas, ZHA and the team created theatrical qualities and projected high level concealed floodlights onto its faceted wall panels. Using the Laser Blade series of linear down lights by iGuzzini, track mounted spots by XAL and mini floor uplights by LightGraphix; the team achieved their dramatic and sophisticated lighting scheme in the internal spaces. Light boxes were created to follow the unique shapes and forms of the atrium wall design. Individual DMX control-dimmed channels are fitted to each light box allowing the whole atmosphere of the atrium to be programmed like a changing landscape for different times of the day.

Outside, Wibre underwater LEDs are used to illuminate the swimming pool, adding a further exotic atmosphere to the building and its surroundings.

Tony Ryan, Project Director at CLA, commented: “The complexity of this structure, from both a lit effect and installation point of view were what made this project a huge challenge. But working with the design teams of both ZHA and Isometrix, we were able to pull off an amazing project and one that is truly a stunning addition to the Macau skyline.”

Muscettola reflected on the relationship ZHA had with the client during the construction: “In Morpheus, Melco have established an entirely new brand within their portfolio that they plan to continue in other locations in Asia. From the very beginning, Melco shared ZHA’s vision of creating new experiences that offer visitors a journey of the imagination.”