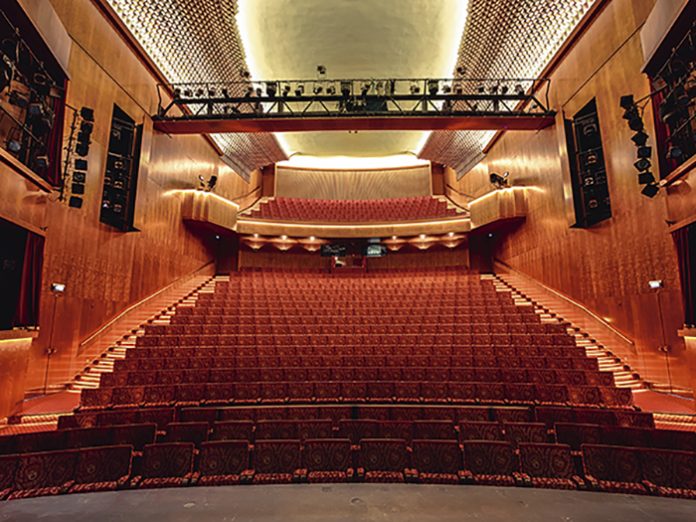 In 1873 economist Indriði Einarsson presented the first ideas for a National Theatre in Iceland. His ideas were formally published in a magazine article in 1905, but it wasn’t until 1923 that they became a reality, when the government introduced an entertainment tax to build the National Theatre.

The first architectural drawings for the National Theatre where submitted in 1925 by government architect Guðjón Samúelsson. Samúelsson was also an urban planning enthusiast and took an important role in designing the master plans for the towns of Isafjorður and Akureyri.

It wasn’t until 1929 that the construction drawings were finished and it then took two years to build the new theatre´s main structure and exterior walls. In 1932 the government stopped construction works due to financial shortage. Then, in 1941, during the Second World War the British armies occupied the unfinished building as part of a military operation to prevent the German Nazis invading Iceland. The British army returned to the theatre in 1944 and then the Icelandic government put a big effort in to finish construction. The National Theatre was officially inaugurated on 20 April 1950.

Originally the theatre had just one of the three current stages. The larger stage was equipped with a rotating platform which is still virtually unchanged. In 1968 an additional house was built as a workshop and today the theatre has three stages in these two buildings. The main stage seats 445 to 499 people; the box sits around 140 people; and the dome or children’s theatre that can guest 100 people. The main hall displays an architectural feature resembling the basalt column walls that exist in Icelandic nature.

In 1990 the theatre was put under crucial renovation works. The lighting design was updated as a part of this renovation to implement creative solutions using the existing technology at that time. Indirect light coves were lit with improvised light series using 40 to 60W incandescent lamps. It is estimated that all of these indirect light coves contained more than 2,000 lamps and the total energy consumption from these installations was around 125kW. Every year hundreds of these lamps were replaced adding considerable costs to the theatre operation.

In the spring of 2012 the electric box for indirect and general lighting failed causing a minor fire. A follow up inspection and evaluation concluded that the power charge for the indirect lighting features was extremely high and needed to be changed. As a result the theatre administration then called architects, engineers, lighting designers and maintenance managers to review its overall lighting and find new solutions.

Verkis Engineer Consultants, Ingólfur Arnarson and Guðjón L. Sigurðssonto decided to keep the same warm lighting atmosphere but switch to LED technology to improve efficency. The old incandescent lamp series were replaced with high efficiency LED strips carefully mounted and aimed to ensure the desired lighting effect. All 40W incandescent lamp series were replaced with 1.2W LED series from luminaire manufacturer Agabekov. This first scope of work in 2013 also served as a test to confirm the functionality of the new installation. After a successful result the project was extended to the main hall.

In 2014 the main hall’s general lighting was renovated using LED technology. As in the public areas, the 60W incandescent lamp series was replaced with 1.2W LED series from the same manufacturer. Additionally, the integrated step light was completely renovated using LED strips from iGuzzini.

The overall power consumption for these light fixtures was reduced from the original 125kW to 10kW and has been running through winter without any problems.