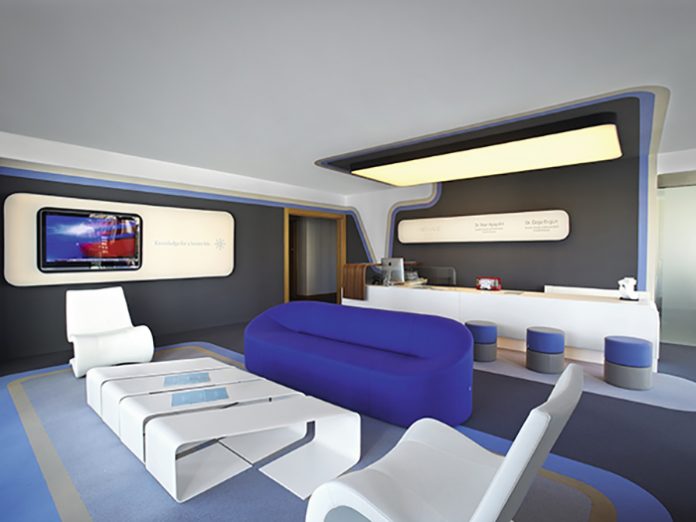 New Age Clinic is a plastic surgery, known for its hair transplantation procedures, located on the twelfth floor of the Fulya Terrace building in Istanbul, Turkey. UÄŸur Ä°mamoÄŸlu and Iglo Architects have created an affordable and impressive design through rational solutions. An impressive interior space was achieved by colouring on the walls, graphic arrangements on the carpet and the design of several furniture and illumination elements.

The founders of the clinic, Dr Ä°lker ApaydÄ±n and Dr Özge Ergün, requested a style that would reflect their personality and the job that they do. The existing 250sqm layout, having four rooms and a lobby, was suitable to function as a plastic surgery without any changes.

The clinic has an original, modern and smart design that serves a clientele who value aesthetics. A deliberate avoidance of standard surgery colours – white and blue – was expressed by the decision to use dark grey as the main colour from ceiling to floor. On the ceiling and wall crossings a fluid form was used to mimic a heartbeat. These graphic details help to define the style of furniture, such as the five-metre long desk in the lobby which was designed by Iglo especially for the project.

As no structural elements were desired, ceiling details were enhanced by using specially designed stretch lighting elements. The designer’s brief was to create an aesthetic space that makes clients walk in and feel comfortable with the surgeon’s work.

Most of the lighting fixtures were designed by Iglo Architects specifically for this project. All illumination in the corridors and lobby is provided by stretch ceiling fixtures, which were made to measure on the spot. On the ceiling and walls, electronically controlled Osram LEDs were fixed to a Barissol PVC stretch ceiling in a metal case.

The fixtures designed by Iglo and produced by Tekno Yapi provided the illumination level needed in the space without the need for additional fixtures. In the office spaces and consultation rooms, Philips wall fixtures, desk lamps and pendants were used for illumination. LED spots, provided by local manufacturers, create a sophisticated effect in the reception via a concealed positioning behind the steel plate on which the New Age Clinic logo was engraved.

A simple, clean approach to the interior and lighting design reflects New Age Clinic’s desire for precision and aestheticism.