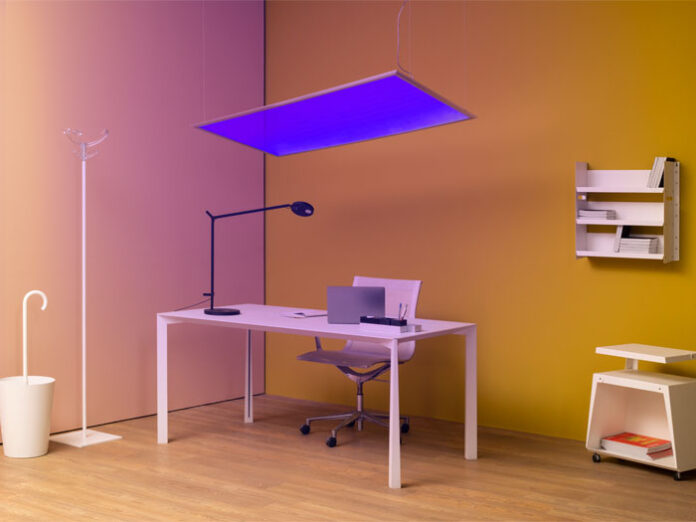 (Italy) – Integralis is a new system that integrates sanitising technology within its lighting solutions.

Artemide has introduced a new technology that potentially turns its lamps into room sanitisers, thanks to the transmittal of antiviral ultraviolet light when people are not around.

Named Integralis, the technology can be fitted to light fixtures (although fixtures cannot be retrofitted with the technology), and programmed via an app to emit normal light when rooms are occupied, and UV light when they are empty.

The UV light acts against pathogenic microorganisms, without harming the space and individuals surrounding it. It can also be used in both public and private spaces – in museums, offices and shops the technology can be adapted to perform an emission frequency that best accommodates the cadence of visitors.

In small spaces, such as service areas, elevators and waiting rooms, intermittent sanitisation is available; presence sensors, which are controlled by the Artemide app, help to manage safety and intensity.

While invisible UV light can potentially kill pathogens, including viruses, it can also be harmful to humans. However, the blue spectrum of visible light can also have an anti-microbial effect.

“In the presence of people, emission frequencies and doses of energy that are not harmful to the eyes and skin can be used, which nonetheless act to inhibit the growth of bacteria, mould and fungi,” said Artemide CEO Carlotta de Bevilacqua.

“In the absence of people, higher energy levels and frequencies such as UV rays can be used, which also act on viruses.”

While the Integralis technology mainly acts on surfaces, it can in theory act on everything it encounters in its path, such as particles suspended in the air, although this would require specific air filtering technology to ensure maximum efficiency.

Short-wavelength UV light (UV-C) has previously been used to sanitise spaces such as aeroplanes and buses in a process known as ultraviolet germicidal irradiation. This process has received increased attention this year for its potential to help curb the spread of Covid-19.

Studies have shown that it can help suppress viruses, including those that cause respiratory issues, by disrupting their RNA and preventing them from replicating. However, its effectiveness is highly dependent on the right dose of UV radiation being used for the right amount of time – this can vary depending on how close the source is to the surface, and what the surface is made of. Any room-scale solutions would therefore need to be properly assessed to ensure effectiveness.

However, de Bevilacqua added that Integralis has “gone and is still going through extensive testing to be able to guarantee the level of sanitation provided by the technology.”