The Society of Light and Lighting, along with CIBSE celebrate the International Year of Light by illuminating some of the UK’s most iconic locations.

On 1 October, in an event designed to showcase the talents of SLL members and the lighting community, teams of dedicated lighting designers shone a ‘new light’ on UNESCO World Heritage Sites across the UK aimed at promoting lighting as both an art form and a science. Starting at William the Conqueror’s Tower of London, the Night of Heritage Light worked its way up the country as the natural light faded.

For one night only, experts in the field of lighting put their designs on display to demonstrate the power of light. Other heritage sites include Edinburgh Old and New Towns, Fountains Abbey, Liverpool Maritime Graving Dock, Pontcysyllte Aquaduct, Ironbridge Gorge, Blenheim Palace, Blaenavon, Jurassic Coast and Giant’s Causeway.

Liz Peck, President of the Society of Light and Lighting, said: “By combining light with some of the UK’s most beautiful sights, we can capture the public’s attention in a way that showcases the best that the lighting industry has to offer. It’s about inspiring the next generation of minds to make the great breakthroughs in lighting by thinking big and realising the industry’s potential.” Combining their love of light and art, design teams showcased the practical applications of lighting and how it can improve and enhance architecture.

The Tower of London has contained and secured a central part of the British identity for almost a millennia, through which the tower has constantly evolved. The design team led by Iain Ruxton from Speirs + Major studio and Colin Ball from BDP Lighting evoked the changing lighting conditions of this long history through their design.

Iain Ruxton from Speirs + Major commented: “The Tower today is a living functioning palace of our government and crown system, still housing the Crown Jewels and Mace, the prime symbols of Crown and Governance. It’s such a central building to British history and to the psychogeography of London, one of the buildings that defines the city. You can’t live in London and not feel its significance. As such we wanted to show this presence of what the Tower guards for our collective identity, and that right here is the Shining Heart of the Nation.”

The lighting scheme for the palace project show focussed on the main entrance and in particular the stunning roofscape that hasn’t ever been highlighted. Leading the design team for the Blenheim Palace project, Michael Curry from dpa lighting consultants, described the site grounds as stunning with a multitude of lighting opportunities in every corner. “Our profession equips us with such amazing tools to transform spaces, objects and people’s lives by improving the lit environment. The opportunity to light Blenheim Palace was clearly a significant driving force for our enthusiasm for the event,” said Curry. “We wanted to splash a little light here and there and also dust it on the top to expose the architectural peaks against the back drop of a setting which again recedes back into darkness.” 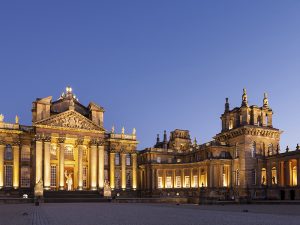 The Edinburgh design team, led by Malcom Innes from Malcom Innes Design, explored innovative ways to use community co-design to re-light the closes that lead off Edinburgh’s historic Royal Mile. The testing site location required battery-powered light sources with a lot of flexible and adjustable lighting stands to work as a synchronised whole.

Innes explained that the idea for the design was to take lots of small sites that are largely hidden from view and reveal them in a creative way.

“Because we were working on a very busy street, our lighting solutions had to be creative and required quite a few hands to make it all work,” he said.

In a first for Fountains Abbey, lighting designers from Apollo Lighting and G3 Lighting Design illuminated the ruins, highlighting the east elevation with shafts of light and graphic light elements taken from the IYOL logo.

Managing director for G3 Lighting Design, Adam Glatherine explained that the design was focused on the often overlooked east elevation of Fountains Abbey by using light to draw it the attention it deserves.

“The colour once present inside the abbey building’s pre-dissolution was hinted at using the ethereal medium of light,” Glatherine said. “Shafts of light symbolise the centuries of culture built within these walls. The particular way light was used on the east façade was intended to bring out even older historical aspects of the Abbey and tie them together with the contemporary values of the International Year of Light.”

Since the 18th century, the Giant’s Causeway has been described as the eighth Wonder of The World. Belfast-based lighting designer Jim Patton from Light and Design studio,

used a mix of battery powered LED fittings with generator-powered LED floods at remote locations along the Causeway, illuminating this magical site for the first time.

Patton said: “I jumped at the chance to work on this project, as an Irishman, this site is part of my heritage. The lunar landscape of the Giant’s Causeway, lurking below the gaunt sea wall where the land ends, must have struck wonder into the hearts of the ancient settlers and still does to tourists that visit today. I wanted to highlight each mystical natural element with several powerful flood lights to make the causeway stand out on Ireland’s beautiful coastal vista.” 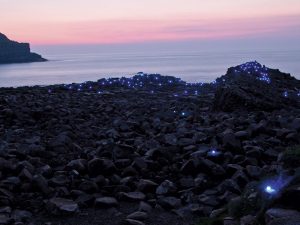 “We also wanted to highlight the apex of this construction to bring out the central artistic detail and allow people to search for the famous silhouette of Abraham Darby,” he said. “I was really pleased to be allocated the Ironbridge scheme as I grew up just 20-minutes’ drive away. Coming from a family of engineers, a day trip out to this amazing structure and the surrounding works would feed an appetite for design, innovation and construction.” 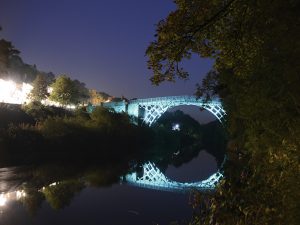 Blaenavon Ironworks, now the site of a museum, was established in 1797 and played a significant part in the industrial revolution, becoming the world’s foremost producer of iron and coal. Hoare Lea Lighting showcased the site’s heritage using small LED tealights through a creative illumination of the Balance Tower, featuring the names of community members associated with the ironworks when it was in operation.

Subtle uplighting was also introduced to link the Balance Tower and introduce varying scales to the scheme.

The design team allocated to Liverpool Maritime, headed up by SLL member Andrew Bissell of Cundall Light4, highlighted the graving dock, a key heritage site in Liverpool and one not often seen or valued by visiting guests to the museum.

Bissell said: “The Night of Heritage Light is the perfect event to promote and educate the importance of lighting design and equipment. The scale of the event will raise the profile of the International Year of Light and the lit sites demonstrated what can be achieved by the lighting community for our communities.

“With so much light in the area we really had to reign ourselves in. Our idea was to light the inside of one of the graving docks and we liked the idea that the effect wouldn’t be seen until you arrived at, or walked past, the graving dock.”

The Bournemouth-based design team led by Michael Grubb created a scene that is reminiscent of an impressionist painting. Using a variety of lighting tricks, the studio filled the arch with reflected light, with additional lighting from the shore providing warmth to the landscape. Grubb explained that the challenge of lighting a location along the Jurassic Coast was too good an opportunity to pass, but with over 100 miles of coastline the selection process was not an easy one.

“As part of the process we took a daytrip along the route, stopping over at numerous locations to admire the landscape and seek out possible lighting opportunities. We finally agreed on Durdle Door, which is arguably the most visually stunning and isolated spot we visited,” he said.