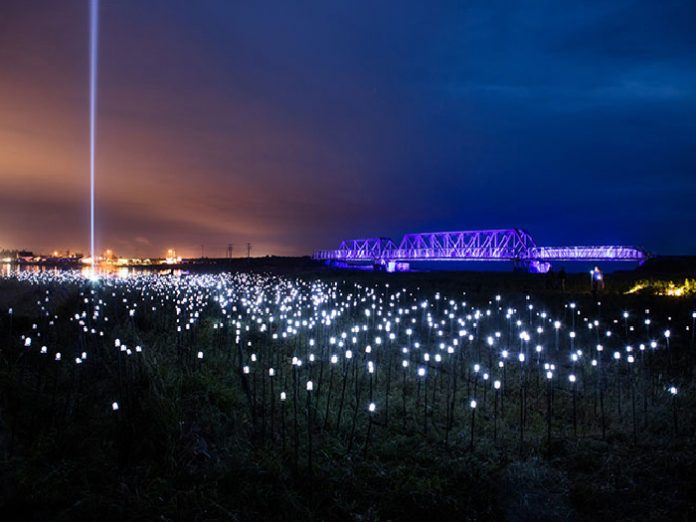 “In Chandler, for reasons unknown, stars are falling from the sky, filling the beaches with light as they wash ashore. Let the stars be your guide and embark on this mythical voyage between Earth and Sky. Your mission is to carry the light of a fallen star along the way and return it to the night sky. Follow the path to where the stars are waiting for you.”

This is the opening concept for Nova Lumina, a stunning, artistic night walk experience that harnesses the natural beauty of the Gaspé Peninsula, in Quebec, Canada inviting visitors to ‘feel and touch the natural phenomena’.

The project, developed by the multimedia design and production studio, Moment Factory, was created as part of a wider bid to revitalise the local economy and create a new tourism offering for the city of Chandler.

Moment Factory’s Lumina family of projects, now numbering five across Quebec and Ontario, are each unique, illuminated night walk experiences that aim to bring people together to enjoy a new, immersive outdoor experience. The first, Foresta Lumina, was created in Coaticook, Quebec in 2014. Following its success, the firm received many calls from parks around the world that wanted their own custom-designed experience.

In the summer of 2016, Moment Factory launched two new illuminated night walks in Quebec: Anima Lumina at a wild rural zoo, and Nova Lumina by the sea. These were followed by the launch of Lumina Borealis – a winter night walk at Fort Henry in Kingston, Ontario, and Tonga Lumina, a night walk on the mountain in Mont-Tremblant, Quebec, which was launched this summer.

Each night walk was specifically designed for each destination, inspired by unique aspects of the local environment and culture. As visitors walk through the paths, they meet different characters, who draw them into an immersive adventure that lasts around an hour, providing a new way to appreciate and enjoy both natural and historic destinations at night.

For Nova Lumina, open from 21st June to 9th October, Moment Factory were inspired by the wide-open spaces, and the vast, beautiful Chandler night sky. Throughout the night walk, visitors walk along an enchanted 1.5-kilometre trail, and explore the light-saturated forest using a custom, connected object, in search of scintillating fallen stars. Encountering playful surprises at every turn, they find and collect ‘stars’ to ‘launch into the sky’ during the closing sequences of the experience.

During the walk, each participant carries a luminous stick that allows them to engage and interact with this very immersive experience. In doing so, the audience become an active part of the experience.

Borne out of a desire to create a new type of light-based attraction in the famously beautiful landscape of the Gaspé Peninsula, local stakeholders wanted to attract new visitorship to breathe new economic and cultural life into the local economy. An equally important goal for the client, the Corporation de développement économique (CDE) du territoire du Rocher-Percé, was to create something that locals will enjoy as much as tourists.

Because of this, respectful and seamless integration of lighting and multimedia equipment into the natural environment was of paramount importance. The site was carefully surveyed and assessed to make sure to adapt the media features and technologies to achieve the lowest possible impact on the local ecosystem.

This seamless integration proved to be something of a challenge for Moment Factory, as Gabriel Pontbriand, Creative Director on Nova Lumina, explained: “Working in a forest and by the sea is very different than working in a city or in an interior setting,” he said. “The advantage is that there is less light pollution, which allows the light effects to be more powerful.

“However, the biggest challenge is that the technology and equipment we use are not always designed to cope with the natural elements. We also have to ensure that the equipment is properly installed to last over a long period of time and that it is as unobtrusive as possible, since the site is also open to the public during the day.”

Due to the experience’s location on the waterfront, any equipment was made to be demountable, owing to the increased likelihood of high winds, salty air, storms and flooding compared to a location further inland. This also meant that Moment Factory had to adapt the concept as it progressed.

Pontbriand continued: “The initial idea didn’t change, but how we conceptualised and created it evolved through the different phases of the project. We had to adapt to the landscape depending on the season.

“At one point, we even decided to change the direction of the path because of the various weather conditions.”

The creative process for Nova Lumina involved close strategic collaboration with many project stakeholders. After an intense research and story ideation phase, the creative and design team began to ideate and prototype an extensive range of potential multimedia and interactive light art zones. Gradually, the experience came together as the story, content production, interactive prototypes and music converged into a cohesive Lumina experience.

Over several months, a large team of lighting, visual and sound designers, animators and programmers worked hard to design and refine the interactive and pre-rendered audio-visual content, with many weeks of on-site integration and testing before it was eventually brought to life in mid-July 2016.

Most of the lighting for the Nova Lumina project was custom-made in house at Moment Factory, designed to ‘respect the language of stars’, in keeping with the recurring theme throughout the night walk. This was achieved with a cold white lighting temperature of 6,000k. “Most site design elements use lighting; the intent is to have one language throughout, the language of stars,” Pontbriand explained. “Each zone of the experience incorporated this idea, this language. For example, the shooting stars, field of stars, etc.”

In order to create as immersive an experience as possible, it was essential to Moment Factory that all lighting elements had to be effectively integrated into the landscape. “It was important for the experience that we could hide all the lighting and equipment sources to allow visitors to experience the full magic of Nova Lumina,” Pontbriand continued.

The result is a mystical, immersive experience, allowing visitors to get lost in a world of light, and while there were some aspects of lighting design that had to be changed once on set, Pontbriand remains delighted with how it turned out. “The final execution of the lighting design surpassed our expectations in part because of the lack of light pollution, as well as the mist created due to our proximity to the sea, which gave great effects,” he said.

“The lighting design and effects bring something fantastical to the space. It’s not about the enhancement of the site, but rather it’s about bringing a pure light signature, which evokes the stars.”

The project has proved to be a big hit with visitors as well, with almost 30,000 people taking in the experience during the summer of 2017. And Pontbriand believes that the popularity of the night walk has greatly contributed to its success, and in achieving CDE du territoire du Rocher-Percé’s initial brief.

He said: “It has contributed to positioning the town of Chandler as a not-to-be-missed touristic destination, and has increased the local people’s pride in their city and region.

“These results are just a part of what drives us to create these unique lighting and multimedia experiences.”