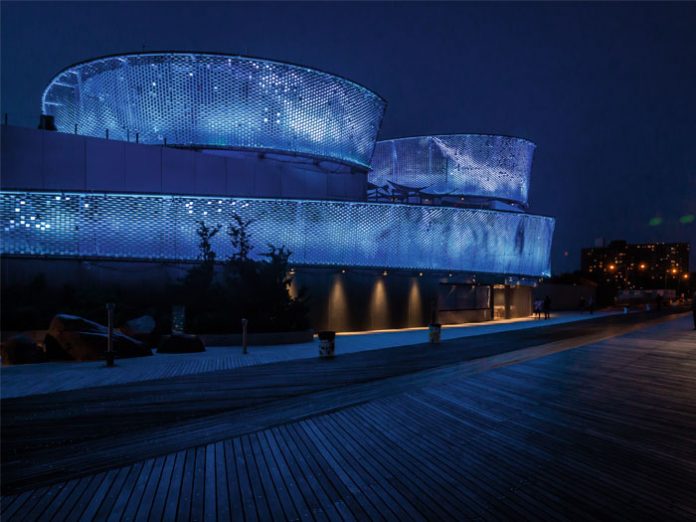 Ocean Wonders: Sharks! is an example of how developed lighting solutions create a dramatic effect but are also environmentally aware. Focus Lighting’s design incorporate both striking lighting schemes that are both aesthetically pleasing and safe for the natural habitats and marine life.

Focus Lighting, a New York-based architectural lighting design firm, teamed up with the Wildlife Conservation Society (WCS), an organisation that manages five of New York City’s six zoos and aquariums, to design the lighting for Ocean Wonders: Sharks!, a 57,000sqft, three-storey exhibit building next to the Coney Island boardwalk.

Christine Hope, Principal Designer at Focus Lighting spoke to arc about the ideas behind the firm’s design concepts: “From the beginning of the project, the goal was to design an experience that communicates the importance of ocean conservation and the vital role sharks play in our ecosystems. Each design element works to support this goal.”

Frustratingly for the teams, the project took over a decade from start to finish, with significant delays as a result of structural damage caused by Hurricane Sandy, which in turn created additional challenges, like constantly changing and updating lighting technologies and the changes in work personnel.

The visitor’s journey into the exhibit begins at the exterior of the building when they are presented with a 1,000ft long shimmering wall that wraps the exterior of the building. The wall, designed by environmental artist Ned Kahn, utilises the wind power of the coast to move 33,000 aluminium plates that flap and reflect light. Each night after sunset, a five-hour long programmed light display, designed by Focus Lighting, illuminates the wall with a carefully curated set of scenes inspired by ocean life.

As the sun sets, the automatically triggered display shifts from less saturated tints of cyan and emerald and transitions the building into richer tones of blue and purple as night falls. The colours and rhythms of the natural wind are reminiscent of the natural bioluminescent tides and backlight flickers through, creating a silvery shimmer of fish-like scales across the wall.

“The nighttime look of the shimmer wall was critical to creating the sense of excitement we were trying to achieve with this project,” explained Hope.

“Its impact on the Coney Island skyline is unparalleled and captures the curiosity of everyone who sees it.”

In the base of the wall, two rows of Philips Color Kinetics LED strips are used to illuminate the aluminium flaps. White uplights behind the shimmer wall bounce off the swinging panels and directly into the viewer’s eyes as a quick sparkle, while the Philips Color Kinetics LED grazers in front of the wall paint the surface in vivid colours that can be seen up and down the boardwalk and the beach.

Moving through into the building, visitors are led on a dramatic journey that takes them further into the deep ocean.

“Our lighting is designed to help present the natural beauty each experience is meant to evoke and create the illusion of complete immersion,” explained Principal Lighting Designer at Focus Lighting, Brett Andersen.

“One of our key challenges was accurately replicating the various underwater environments from which the animals come. We worked closely with WCS’s diving team to find the exact water colours and light levels seen at various depths and regions of our oceans. For instance, the exhibit’s second large tank is a full cylinder that replicates an area of the harbour called the New York Bight, with each species on display native to that area. We developed alongside WCS the colour of the water seen when diving in this area at a depth of 60-80ft below the surface.”

Upon entering the aquarium, the first tank visitors experience is the Coral Reef tank, a tunnel designed to have the look and feel of a bright and colourful coral reef. For this effect, the lighting team specified RGBW LED fixtures to light the tank, which allowed them to tune the lighting to the exact colour quality needed in order to make the coral stand out.

Working above and around water required a number of unique mounting techniques. At the Coral Reef tank, for instance, each light was mounted above the water on a custom designed trolley system. This allowed for precise fixture placement around the deeply textured coral, all while mitigating sightlines into the fixtures. The system also makes maintenance easy as the fixtures can be pulled back over solid ground.

The New York Bight tank has a custom designed mounting structure with a white painted ceiling above that allow carefully tuned RGBW floodlights to reflect off and into the tank. This creates a soft even glow of light that is experienced at a depth of 60-80ft. Smaller, direct accent spotlights mounted to the top of the mounting structure add subtle, natural feeling highlights.

The Canyon’s Edge is the exhibit’s deep ocean shark tank, which the team wanted to have a dark and ominous feel. Cool LED spots create shafts of ‘sunlight’ in narrow strips of the sandy bottom along the front edge of the tank, and then the exhibit falls off into darkness. The deeper recesses of the tank are flooded with blue LED light so sharks are barely visible in the murky waters, before suddenly coming into view as they approach the front of the tank. The viewer’s room is in complete darkness so nothing reflects onto the tank and distracts from the spectacle.

Hope explained further: “In the Meet The Shark room, where the majority of the exhibit’s information is presented, lighting levels are higher than most other areas so that visitors can read the various bits of information. While at the Canyon’s Edge, the exhibit’s largest and final tank, the observation area was left dark to offer visitors a grand, theatre-like view of the animals before parting.

“The decision to exclusively use LEDs grew as technology advanced over the course of the project. Once the colour quality, output and performance of the LED accents and floodlighting were at an acceptable level, revising our specifications became the clear choice,” she explained.

“On the interior, we were able to fine-tune the colours we used to highlight various elements of coral or rockwork in the tanks, while also minimising the difficult access of tanks for maintenance. On the exterior, Philips Color Kinetics’ linear RGB fixtures allowed us to create infinite combinations of colour movement while we created the lighting art-piece. We used ETC Paradigm control racks and processors for all the interior and exterior lighting, along with a Mosaic processor to programme and run the exterior nightly lighting show.”

The team worked to support a storyline with light throughout the interpretive exhibit designs, whether it was with the light theming elements or the live animals. Keeping the lighting out of view was an important factor of keeping the environment feeling authentic and immersive and not staged. “The display lighting had to be flexible and easily adjustable, yet very well-hidden so as not to distract from the exhibits themselves,” explained Hope.

Linear cove accents from Philips Color Kinetics, track accents from Juno and tapelight accents from Luminii were utilised throughout the exhibition, while Focus Lighting used Lumenpulse Lumenbeam accents at the tanks.

“The lighting at the tanks had to properly illuminate the water without creating hotspots or glare. Our goal was to make everything feel very natural,” Hope continued.

After the lengthy fourteen-year process, this aquarium has created an educational and aesthetically pleasing environment for all to appreciate the depths of our oceans.

“Much of the success of this project is in the emotional connection we are able to evoke among visitors,” Hope reflected.

“This is a direct result of the way lighting integrates with each experience and creates a feeling of authenticity that the visitors will remember long after visiting the aquarium, and hopefully, encourages them to take action in the effort to preserve our oceans.

“The project was very collaborative; each design element needed to support the others to create a cohesive, memorable experience that quickly drives home the exhibit’s key message: preserving our planet’s oceans,” she added.

“The final lighting design is almost exactly what we envisioned so many years ago. In fact, we have photos of the exhibit today that look nearly identical to early renderings of the project. For us, that is an immense accomplishment.”