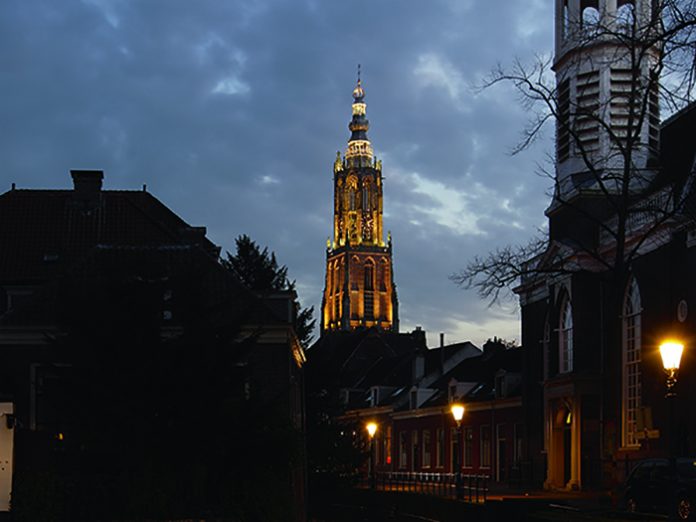 Standing at 98m tall, the Onze Lieve Vrouwe tower shines brightly over the geographical heart of the Netherlands, thanks to a lighting makeover by lighting designer Jeroen Jans.

While local authorities were enthusiastic about the project, there was no funding available and so Jans set up a non-profit organisation to raise the required funds in just nine months. Now considered a beacon for Amersfoort and its people, the tower’s lighting upgrade took two years to complete, with Jans envisioning the tower as “a magical structure projecting unity, balance and synergy through lighting.”

Jans’ main objectives were to drastically reduce light pollution and achieve a 50% reduction in power. In order to achieve this, the lighting had to work from the inside out, ensuring no external shining of beams onto the building, and no fixtures and fittings were visible. This vision was achieved with the help of light engineering company Lomans, which installed Osram Traxon and CLS LED lighting fixtures. The Osram fixtures includes two types of liners, the XB27 and XB36, both of which use different colour temperatures and lenses to give each part of the tower a specific texture.

There were 138 CLS LEDs supplied in three types of fixtures – the Revo-basic, the Revo compact and the Mirjam. Each fixture has its own lens and colour configuration and is relatively small so doesn’t affect the building’s architectural aesthetics. The Revo fixtures lower the power consumption and limit the loss of light to reduce light pollution, thereby exaggerating these aesthetic details with focussed and directed lighting. The Revo Series’ lenses are fully interchangeable, lighting all details of the tower thanks to the different beam angles.

The project was not without its challenges however and Jans described how it was difficult to fix anything to the tower without causing damage. In order to design skirting boards for the three long walkways, Jans worked closely with Cultural Heritage Agency of the Netherlands to come up with something that could be integrated with existing security fences. The newly lit tower was revealed in November last year with the local residents receiving it with enthusiasm and pride.