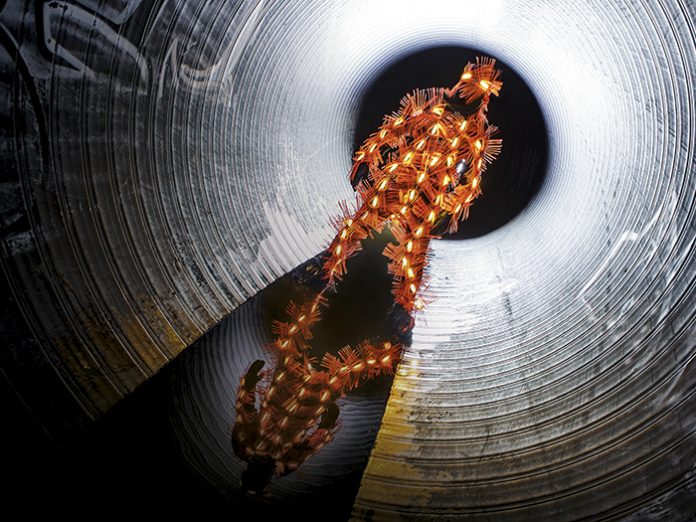 With the hunt for renewable energy being an ongoing issue, Canada-based lighting designer NARGIZA has created a performance piece that uses light, aliens and the power of colour to stress the importance of energy.

Designed by Canada-based NARGIZA, lighting performance OUTSIDERS: ENERGY IS INSIDE was staged in Oakville, Ontario, Canada in May 2016 at three locations: Lake Ontario, Lions Valley Park and a tunnel under a highway.

As we all know, one of the most urgent issues of the present day is the search for alternative energy sources that are capable of sustaining safe life on Earth. Humans have discovered, and are currently using, various existing energy sources. On the whole, these are mineral resources from our planet as well as the power of the wind, sun and water.

This performance embodies NARGIZA’s imagination of how and what kind of energy inhabitants of other planets and galaxies might use to survive – how could they possibly look? How could they communicate? What powers their movement, growth, lighting, food supply etc.?

NARGIZA chose the colour red to portray the essence and to visualise energy. That is why the ‘aliens’ in the performance are turned red – maybe suggesting that they came from Mars as red is often associated with the planet.

People often say that red is the most vibrant colour as it symbolises passionate love, power, fire and dynamics. According to the Chinese, red brings good luck, happiness and splendour. For the Native Americans it incarnates life and action.

The two visiting ‘aliens’ draw a parallel to some sort of abstract generalisation of these beliefs. It’s as if they came to share their knowledge, experience and achievements in using various energy sources. To represent this idea visually, NARGIZA decided to make the aliens full of light. Thus reinforcing the main point that the energy is found inside of us and it is the foundation of our livelihood.