Opened in the winter of 2018, the RuMa Hotel and Residences is a 253-room development in downtown Kuala Lumpur, Malaysia. Located in the vibrant heart of the city’s Golden Triangle, the hotel features dramatic views of the iconic Petronas twin towers.

Designed by Malaysian architecture firm BEP Arkitek, with interior design from MQ Studio and lighting design from The Flaming Beacon, the hotel takes great inspiration from the country’s heritage, offering a contemporary interpretation of Malaysia’s colonial past, with an additional, more homely touch; the name of the hotel, RuMa, is itself derived from the Malay word for ‘home’. As such, the design and conceptual approach for the hotel was based around a home that captures, in spirit, the houses of a bygone era.

The Flaming Beacon was introduced to the project via the hotel operator, Shanghai-based Urban Resort Concepts (URC), whom the designers have a long-standing relationship with, having worked together on a number of projects throughout China. Andrew Jaques, Director of The Flaming Beacon, explained more about the design concept for The RuMa: “Like many of the URC projects we have previously worked on, the RuMa encouraged the design team to explore contextually relevant information and condense it into a contemporary narrative for the project.

“There wasn’t a specific lighting design brief per se; we were fortunate to have, on this project, an operator and client who understood how well-lit spaces can positively affect the experience of their guests. They also trusted the entire design team to work together to deliver a hotel that met this broad approach.

“As the design developed, there was an increasing focus on creating a strong domestic character – hence the hotel’s name, RuMa, literally translating as ‘home’. This brought into focus during the design development the material selection and detailing, which were intentionally humble and tactile.”

Alongside this strong domestic character, other sub-themes emerge and reveal themselves within the project, specifically referencing aspects of Malaysian culture and design. The interior design in particular took a strong inspiration from the country’s heritage.

Jaques continued: “The interior designer, Andy Hall from MQ Studio, had spent several months researching Malaysia’s history, including its colonial and mining past, as well as its disappearing architectural vernacular.

“Andy presented his overall design approach to us and from that moment we worked together to find ways to express his ideas through rigorous integration of lighting devices, often with a contemporary take. He was very receptive to our ideas, especially those which expanded on his concepts through the use of lighting techniques, and was willing to modify his interiors to accommodate many of these ideas.”

Indeed the close collaboration between The Flaming Beacon and MQ Studio is something that Jaques felt was very unique to this project, as “it’s not often you have the lead designer asking ‘will this work for the lighting?’

“It was refreshing to have a design collaborator so invested in maintaining the lighting design intention.”

Throughout the hotel, lighting is inseparable from the interior design and architecture, forming one unified design strategy. To create this unified feel, Jaques added that The Flaming Beacon “studied every interior and architectural material and element to establish their importance and light ability in the space to build up our lighting scenes”.

“Where customised decorative lighting objects were required to complement these scenes, we applied complementary material and finishes to these objects to connect them to the spaces,” he continued.

On an architectural level, The Flaming Beacon used lighting to best express the architectural concepts, whether this be through the layering and revelations of various screening lattices, or reinforcing the architect’s implied datum, drawn from colonial fenestration studies.

“Despite embracing the design concepts, our client wasn’t experienced with a project requiring this level of detail. To the client’s credit though, he never lost sight of the project vision and quality expectation and persevered.

“From the outset, there was pressure on the budget, and lighting equipment was not immune. One of the ways we overcame this was to strategically determine where to use dimmers.

“Main public spaces were fully dimmable, but exterior and guest rooms had limited dimming and some circulation spaces had none. This primary, secondary and tertiary approach continued with the LED quality specification, which ironically resolved itself due to improvements in quality and cost of LEDs by the time it came to placing orders.”

Ensuring that key areas had dimming was critical in being able to create the intimate, warm atmosphere across RuMa – one that plays on the contrasts between light and shadow and generates a welcoming ambiance for visitors.

“Consistent warm light that transitions from warm to even warmer late into the evening makes for a cosy environment, and playing with shadow and texture makes for subtle but interesting variations for guests to enjoy,” Jaques explained. “This was something we challenged ourselves to explore in the design and were fortunate to have design collaborators who shared this vision.

“We constantly questioned how we could express materials in unexpected and interesting ways. For example, the kelarai screens, more often seen in traditional Malay dwellings and used throughout the projects, were in the spa, woven in such a manner to enable shadow patterns to land on the floor almost by magic.

“Finding someone who could still weave the rattan in the traditional way was a challenge. An expert weaver was eventually located – she was 90-years-old and living in a small village outside of Penang – and we went about testing several weave designs until one was made that retained the intended pattern, but also enabled the shadowing on the floor.”

Outside of the use of lighting, the design team worked with the interior designer in the selection of materials that would enhance the warm environment; materials such as the copper ceiling, the timber and warm stone finishes, and the use of terracotta, all add to the creation of the desired ambiance.

“Unwanted reflections that would have been a distraction were carefully planned for,” Jaques added. “One of the few specular surfaces in the hotel, the copper-clad lobby ceiling, is only visible via indirect reflected light from adjacent surfaces.”

The Flaming Beacon used Vista’s flexible LED strips at various outputs, from 2400K to 3000K, in coves and joinery throughout, while Delta Light’s Halosun surface-mounted JAC spotlights are used in recessed ceiling slots in the meeting rooms and lobby. Guestrooms are illuminated via Lucent’s Prospec downlight and Soraa’s Vivid MR16 luminaires.

Outside, Lumascape’s LS2010 spike-mounted uplights provide a soft illumination on planters and trees, while Luci’s line-graze fittings wall wash behind screens on the façade, and ceiling slot grazers and the lobby vestibules.

These lighting elements are complemented by custom fittings, designed by The Flaming Beacon and manufactured by InnerSpace, that feature throughout the hotel. These fittings, Jaques said, “drew inspiration from the narratives relating to trading and mining, and put a twist on them to suit the contemporary nature of the project.”

He continued: “In the case of the guestroom lights, the approach was to create a series of lighting devices that appeared ‘machined and assembled’ in reference to the industrial aesthetic of the colonial period.

“Many of the bigger lighting gestures blur the boundary between what is an interior element and what is a lighting element. In the entry vestibule, is the curved terracotta half pipe idea a giant light fitting array, or simply LED strips built into the architecture? This ambiguity is exciting.”

The ambiguity that Jaques speaks of helps to create a sense of drama amid the warm, welcoming environment of the RuMa Hotel, and while it has been gaining plaudits since its opening in late 2018, many feel that the lighting has been integral to its popularity.

“The lighting is a key element in creating a certain vibe, which can directly influence a hotel’s success, especially a boutique hotel unashamedly announcing itself as being different to its competition,” he said.

“Carefully integrated lighting always aimed at making the interior of the architecture expressions appear as natural and interesting as possible, and the design of customised light fittings that follow a similar material palate and feel seamlessly part of the interior design, make for a series of spaces that feel elegant, cosy, welcoming, and well… homely.” 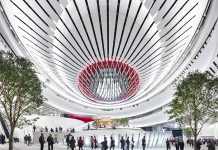 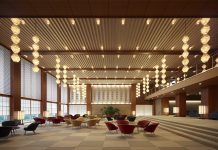 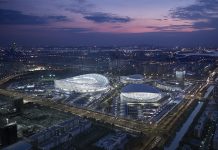