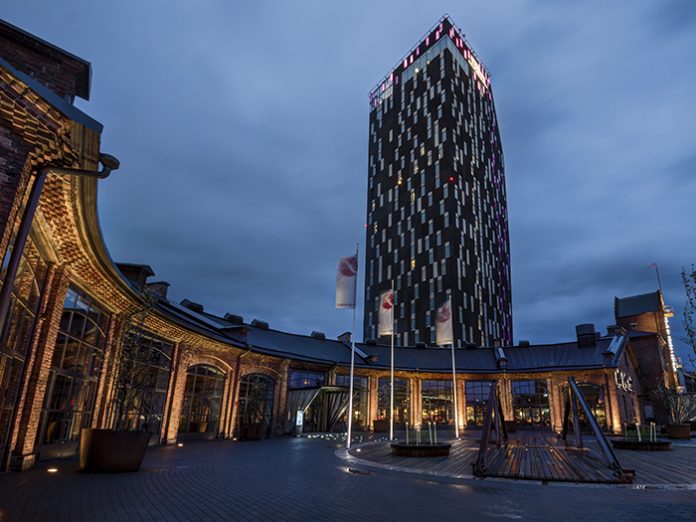 Having won this year’s Finnish Lighting Award, the façade lighting of Solo Sokos Hotel Torni in Tampere, shines brightly among the winter darkness, reflecting the dynamic urban atmosphere that surrounds it.

With just a few hours of daylight a day during the winter months in Scandinavia and Finland, artificial lighting has an extremely important role to play in the mental state of its inhabitants. With this in mind, when illuminating the façade of the Solo Sokos Hotel Torni Tampere, the expectations on the lighting design were high.

While the hotel’s commercial operator Sokotel initially wanted the building to look as though it had just been transported from Las Vegas or Times Square, the city architects were hesitant; lighting a tower hotel to such a level would significantly effect the cityscape and the image of the city during dark periods and so the task was to find a lighting solution for both.

It was decided that the lighting should, in a modern and harmonic way make the hotel building come alive while brightening the city’s image at the same time. It had to fit in with citizens’ everyday life yet reflect the dynamic and urban atmosphere of the city. While Finland is mainly a country of low urban architecture, in contrast the hotel is a significant landmark in the City of Tampere. Found on the former train depot, it can be seen from any point in the city and in turn modifies the cityscape seen from almost every street view.

The hotel consists of two parts. The restaurant and congress premises are located in the lower part – historically valuable old locomotive stables, with the building representing traditional red brick architecture typical for Tampere region. A new tower building as a contrary, represents modern high-glass Finnish architecture. The old building has been highlighted in a very traditional and simple way. The lighting for the hotel yard was designed to be detailed. The main idea was to open views to the interior spaces and also leave room for dramatic darkness.

For the tower section many alternatives were considered. It had to combine architecture, cityscape and commercial viewpoints. The solution was to highlight the architectural facet in a sophisticated way by giving a little bit of liveliness and delicate change to the tones of the lighting used.

The idea behind the upper part of the tower was taken from the architecture, as the building is characterised by the rhythm of steel elements. This same rhythm was repeated with the media panels placed around the building at its top. The media facade has 360º of visibility and as such has become a dynamic, yet harmonic part of the cityscape.

As the lighting design process advanced, it led to the creation of light art Signal, bringing the media façade and architectural facet lighting together. Despite media panels being separate from each other they still work together coherently, with the design idea to show only abstract movement of light on the media surface. While the steel elements reflect the sunlight in various cardinals in dark periods, the media surface aims to reflect natural light and everyday life, changing according to the day of the week, whether it is night or day, depending on the seasons, festivals and national holidays.

This award-winning project is an example of how modern technology can be applied as part of the city’s architecture and scenery. The media façade draws the urban landscape in harmoniously, standing as a signal to the surrounding areas and enlivening the cityscape. In dark periods, every hour, the flammable light show spices things up in the city.

The building has become a unique and famous attraction in the country, with many tourists, construction professionals and architects making excursions to see this rewarded installation. The hotel has also become a popular destination for weekend travellers and a good reason to get to know Tampere, the largest inland city in Scandinavia – tourism in winter has particularly been boosted thanks to the addition of the hotel, which is consistently booked up.