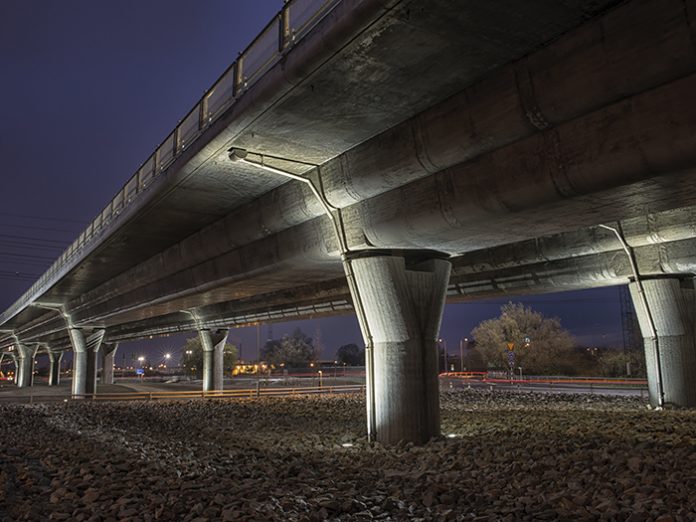 Designed by Johan Moritz, the lighting scheme of Malmö’s Spillepengen interchange, darc awards / architectural winner of the Structures Low Budget category, is both understated and sophisticated, while improving the safety of its pedestrian and cycling tunnel.

Located in Malmö, Sweden, the Spillepengen interchange project was a collaboration between the Swedish Transport Administration and the Municipality of Malmö. The project’s aim was to solve the traffic conflict between the roundabout in one of nine European transport routes that connects Scandinavia with Europe via the port of Malmö with one of Malmö’s major commuter routes. The solution was to lift commuter traffic with a bridge over the roundabout in a so-called ‘fly over’.

Commencing in 2009, with construction starting in spring 2014, the interchange was finally inaugurated on 1 December 2015 when the bridge was opened for traffic.

The project’s task was to find ‘the key to North Harbour’ and the solution became a ‘gateway to Europe’. The construction form was decided to be a turn-key contract, but the lighting design was strongly controlled by the client.

Originally, the bridge had a simple illumination that provided an interesting light image of the bridge. Bronze street lights could be seen as a string of pearls, creating a safe cycle route for the commuting cyclists through the interchange.

Designed by the City of Malmö’s official lighting designer Johan Moritz, the new lighting scheme involved retaining the masts and strengthening lights to create a backlight of the area. The alternative was to take down the masts and have the traditional street lights around the circle.

“The place had an unclear identity. Commuter traffic did not know where the city began,’’ explained Moritz. ‘‘Traffic to and from the port didn’t know if it was in Malmö or outside the city. Seeing as the port is part of the city it was important to use lighting in a way that would strengthen the identity and the orientation of the area as a whole.’’

Approaching the city from the inner ring road defines its ending and then connects to the beyond. The team wanted to signal from a long distance the significance of the interchange for all users. So the bridge piers have been illuminated from below to begin a common method used for bridges along the inner ring road.

Initially, white and other colours were suggested for the illumination, with warm white streetlights on the bridge selected to create the same feeling of a string of pearls. “We lowered the lighting height of the bridge to eight-metres and slightly reduced the distance between lighting points,’’ explained Moritz.

Street lights on the bridge also shed light on the ground between the bridges with their warm white lighting.

The scheme also helped to strengthen the safety aspect by enhancing lighting inside the pedestrian and bicycle tunnels with the completion of targeted ground lighting on their respective wing walls.

“For many international commuters to and from Europe, Interchange Spillepengen is the only iconic view that is accessible. By using simple yet effective lighting methods we were able to appeal to many users and create a more coherent sense of place,’’ concluded Moritz.