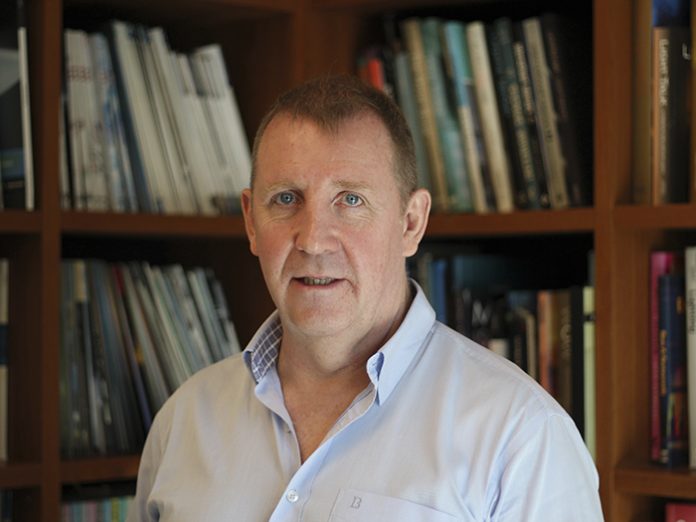 Often recognised for his former footballing talents, Stephen Gough is a lighting designer who grabbed the industry by the horns. From working two jobs at once to Director of Project Lighting Design, his story is one of inspirational perseverance and global recognition. Robert Such caught up with Gough to talk light and career progression.

Back in the 1980’s, when Stephen Gough – would-be lighting designer and director of Project Lighting Design (PLD) – used to turn up for meetings, people would recognise him, and ask: Aren’t you the footballer? “Yeah, but this is my other job,” he would reply. At that time, his ‘other job’ was with Hong Kong-based lighting firm Ricardo Lighting.

In his early twenties, Gough had been assigned to Ricardo Lighting’s special projects department. He had been given the job of promoting Japanese firm Yamada Shomei Lighting’s products to foreign architects working in Hong Kong.

“It was perfect,” says Gough, “I got to the office at 10am, worked till 4pm, and then went back to football training. The Yamada Shomei Lighting engineers visited us regularly and they taught me a lot about their products and how to calculate light levels and the basic principles of good lighting. I went to Japan a few times to see their factory and completed projects and learn more about their equipment.”

Working with engineers, studying lighting diagrams and architectural drawings was not altogether alien to Gough. “I left school at fifteen,” he says, “and my first job was as an apprentice at the local engineering company. They built steel bridges and dockside cranes. I suppose it was a good foundation for me. I learned to draw and read drawings, and it was a no-nonsense kind of environment.”

At the same time as he was doing his engineering apprenticeship, he was also playing football in his home town of Annan in south-west Scotland. When a football scout spotted him playing, and asked if he wanted to play football professionally in Hong Kong, Gough, a centre forward, jumped at the chance to play football and travel.

But even though he enjoyed the game, he always had it in the back of his mind that “if the football didn’t work out, what was I going to do?” he says. “That’s what drove me to look for a job.” He eventually saw, and replied to, a newspaper advert for the Ricardo Lighting job.

“Hong Kong was, and still is, a fantastic lighting spectacle,” he adds. When a new lighting scheme was completed, he would “rush round to look at it and try to analyse the lighting”.

During his time working at Ricardo Lighting, Gough met Tony Corbett of Anthony Corbett Associates. Gough considers Corbett to be his lighting mentor. Corbett had moved to Singapore in the early 1980’s to set up his architectural lighting practice, and in late 1985 he approached Gough to help him set up in Hong Kong.

“Tony really inspired me,” says Gough. “When he presented to our clients he would just roll out the drawings and so eloquently describe his concept. I suppose I did my university in light with Tony. He was a very demanding boss to work for for long hours in the office, but we also had great fun. He liked to party and we would visit the best new restaurants and clubs to check out the latest design trends.”

Despite being “brilliant”, says Gough, Corbett “was a tough cookie to work for.” And so, wanting to be in charge of his own projects, Gough decided to move on and to open his own firm in Hong Kong, which he did in late 1989.

PLD’s first projects were small restaurants, bars—like the Joe Bananas pub in the Wan Chai District of Hong Kong—and some private residence work. Through these the firm gained recognition, and soon Gough was able to pitch for bigger projects, such as the retail mall at the top of the Peak Tram in Hong Kong.

In 1991 Gough set up a small office in Singapore. “We had been appointed on a couple of hotel projects here,” he says, “and I found that there was a vibrant design scene. We still had the Hong Kong operation and I used to commute back and forward.”

To date some of PLD’s standout works include the Singapore Flyer, a 150-metre diameter Ferris wheel, and the Marina Bay Sands Integrated Resort, which includes the lotus flower-shaped ArtScience Museum.

“It was such a privilege to work with Moshe Safdie (the architect that designed the Marina Bay Sands complex), Aedas Architects and the MBS team,” says Gough. “Our scope covered 2,600 hotel rooms, public areas, guest rooms and suites, F and B outlets, the convention and exhibition facilities, the casino and gaming areas, the retail mall, and the arts and the science museum.”

After that, developers came knocking on his door, literally, wanting to speak to the person who had designed the MBS lighting.

Although well-known for lighting high-end hotels, PLD has also illuminated large retail developments, like The Dubai Mall and the Shanghai IFC Mall.

Currently the firm has 25 projects underway, managed by its offices in Bangkok, Shanghai, Dubai, and more recently London, since 2015. In Dubai and London, the offices go by the name of Light Touch PLD, and in total the firm has some 50 staff spread across all of its offices.

“Having this presence across Europe, the Middle East and Asia gives us exposure to a vast client base,” says Gough.

The Dubai and London offices are working on lighting the glass and steel sphere for the 2017 Kazakhstan Expo, retail malls in Egypt and other projects in the UAE and Africa, while the Bangkok office is working on lighting buildings in Bangkok, Sri Lanka, Bali and Korea. PLD’s Singapore office is working on projects in China, such as the Bulgari Hotel in Shanghai, and on commissions in Singapore, the Maldives, Indonesia and India.

Although Gough has a core team of staff that know what’s required when designing the lighting for an exterior or an interior, whether it’s for a high-end hotel, a house or a retail complex, Gough gets involved at all stages.

“Good lighting is like anything else, you have to work at how it’s detailed, how it’s constructed, how it’s installed. You have to be heavily involved in how it’s put together,” he concludes.

After some 30 years, Gough is still busy, still travelling – just not to play football.