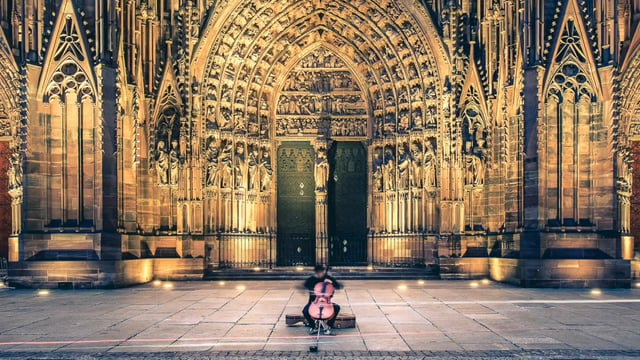 The nocturnal appearance of one of Europe’s most important cathedrals has undergone a remarkable transformation, thanks to a stunning new lighting design scheme.

Strasbourg Cathedral is located in the heart of the Grande Île, an island that lies at the historic centre of the north-eastern French city and has been a UNESCO World Heritage site since 1988. The cathedral itself has been under protection as a heritage building since the late 1800s, and is one of the largest Gothic cathedrals in France, with its high silhouette dominating the city’s skyline. Still deeply immersed in a medieval urban structure, the cathedral is the symbol of Alsace, and its four million visitors per year make it the second most visited cathedral in the whole of France, second only to the Notre Dame in Paris.

Construction on this landmark structure began in 1015 by Werner de Habsbourg, although following several fires, reconstruction of the cathedral began at the end of the twelfth century and continued until the fifteenth century, progressing from the chorus towards the western façade, and ending in 1439 with the raising of the spire. As such, the cathedral blends Roman, Gothic, Baroque, Neo-Gothic and Neo-Romantic architectural styles, and is considered to be one of the masterpieces of gothic art.

The project was carried out as part of a wider, unified lighting plan aimed at revitalising the city, enhancing its heritage and creating something more attractive for tourists visiting the area through the use of light and shadow, while also inviting the Strasbourgois themselves to rediscover their city with new eyes.

The lighting for Strasbourg Cathedral reveals a new facet of the church that largely exceeds the framework for the urban area of Strasbourg. Each night, the cathedral is wrapped in a soft and balanced light and shadow. This glowing light is designed to respect the edifice and urban context in which it is integrated. It does this by magnifying the exceptional patrimonial and architectural wealth of the cathedral, such as its remarkable frontages and sculptures.

Initial specifications for the project called for a ‘highly qualitative light, revealing the iconic and magnificent architecture of one of the finest examples of Gothic architecture, while remaining respectful of its millennial history and sacred dimension’. Owing to its status as a UNESCO protected site, the team at L’Acte Lumière was required to present, account for and share their choices with the validation committee, which included the building owner, funders and contracting authorities from the city, as well as the heritage foundation itself. Designers were also required to complete a manifest stating their commitment to qualitative light as they revealed the architectural magnificence of this iconic Gothic cathedral.

During these early stages of the project, L’Acte Lumière went through a highly detailed planning process, using an incredibly complex 3D model of the cathedral to create the rendering, as Jean-Yves Soëtnick, lighting designer at the firm, explained: “It was very pleasant to work on such a highly-detailed 3D rendering, something that is not frequent on heritage buildings, to test almost every single floodlight on the Cathedral.

“Every projector had to be calculated, but while it was a huge amount of work, it was worth doing it as the day we completed the first rendering, I knew it would be fine. The rendering helped us to identify some details like complex shadows, which we were able to anticipate without spending time testing it on site.”

After deep consideration of the sacred and iconographic facets and meanings of the structure, designers chose to create a precise illumination, balancing shadow and light. The brown and yellow sandstone comprised rich gradients of red and purples, corresponding to R8 – R9 CRI. This is a difficult colour to render in high quality diodes, so designers selected a 2700K fixture with a short chromatic distortion to ensure quality light. This solution infuses a global ambient luminescence onto the structure, allowing the deep colours of the sandstone and its intricate details to be revealed.

Focal glow and highlights were used to enhance the architecture and reveal detailed layers of masonry, like illuminated text. Dynamic white LED luminaires, soft gradients and subtle tints were used to create three distinct nightscapes throughout the whole of the elevation.

These nightscapes vary depending on the time; the first, set between twilight and 10pm, acts as a ‘kind of continuity of the colours from the last solar rays’, highlighting the intricate layers of the structure, with each receding layer growing progressively warmer towards the centre.

During the second, set between 10pm and 1am, the iconographic details are reduced and blurred, to draw eyes to the elevation of the building to give a more unified view of the whole edifice at its full height, while in the third phase, set between 1am and dawn, only the upper part of the cathedral tower and roof is highlighted – immutable and comforting, it remains emergent throughout the night above the urban skyline while minimising light pollution to nearby buildings.

The lighting of the cathedral integrates the challenges of energy saving and easy maintenance. The light is produced entirely by LEDs, a first in France for a patrimonial building of such a size. As with the design of the new luminaires and their implementation, the optimisation of the energy output of the installation was one of the largest challenges for the project. However, the use of the latest LED technologies makes it possible to better target the elements to be lit, and therefore reduce total energy consumption, leading to a more effecting lighting. Alongside this, the installed LEDs have a much longer lifetime, and far reduced maintenance needs.

The installation is made up of 580 fixtures, including around 400 Lumenbeam and Lumenfacade luminaires from Lumenpulse, 30 periphery projectors, 60 devices embedded in the ground and 490 projectors or linear devices on the building, divided into eight families of devices, from 3-watts to 250-watts. Every projector is dimmable for the perfect quantities of light, revealing the splendour of the building, the distinctive colour of its sandstone and its intricate masonry and layers. These elements are DMX controlled by nine electrical power boxes that utilise Lumenpulse’s Dynamic White technology, which allows the lighting designers to tune the luminous power and colour temperature in order to precisely match the colours of the stonework.

“Throughout the project, the effects had to be correctly balanced and we had to reproduce the same effect across the building, however in some cases we had to simulate the same effect, but from different points, distance or angles,” Soëtnick explained.

“So it was important to be sure that we had the same quality of light without depending on one type of projector, so the Lumenpulse range was perfect for this.”

Elsewhere, L’Acte Lumière chose Louss for their recessed inground lighting, as they were able to make a dynamic white inground light, while Insta and WE-EF were chosen for the linear lighting.

Approximately fourteen kilometres of cable and 400 light sources are installed on the building, and the entire installation was completed without any drilling into the stone, only mortar joints – an important requirement for the project set by the heritage committee, owing to the cathedral’s UNESCO heritage status. On top of this, all of the bespoke clamping sleeves, collars, fixture corsets and luminaires were painted onsite with an accurate colour to match the stone. As a result of these considerations, the entire installation can be removed without causing any damage to the structure. None of the luminaires, except those in ground, are visible from the exterior, resulting in a balanced, quiet and ‘chiselled’ light, and a magnificent, poetic glow of the building.

“The lighting creates a very rich and peaceful glow that pictures can’t translate,” continued Soëtnick. “In a way, it’s a light that you have to feel, especially in the intricate layers of masonry.”

Francois-Xavier Souvay, President and CEO of Lumenpulse Group, added: “This is a very great privilege to be involved in illuminating a building of such scale and importance. It’s architecturally and historically unique, and of immeasurable significance to the region of Alsace and the whole of France.

“We felt a great responsibility to make sure that we provided an effective, sensible lighting solution that reveals the cathedral at its very best, and that will last for many years to come.”

Soëtnick added: “For me, as a lover of the city of Strasbourg, I’ve been very interested in this masterpiece for a long time; its architecture, and its history. I’m always very proud when I see people staring at the building and finding intricate details that they never noticed during daylight.

“With this illumination, and the renewal of the ‘place du Chateau’ [completed by L’Acte Lumière in 2013], it’s a complete and vibrant heart for the city, and a new night icon, visible in a soft and chiseled light all around.”

The project itself has gained recognition on a wider scale too, picking up an Award of Excellence at the IALD Awards, while also being shortlisted for the upcoming darc awards / architectural. At the IALD Awards presentation, held in Philadelphia on 10th May, judges described the project as ‘a beautiful balance of highlighting and shadow’ and ‘an impressive technical solution – a bridge between the earth and sky, an icon of darkness and light, a monument that ignites the imagination and reveals the passion of its builders’.