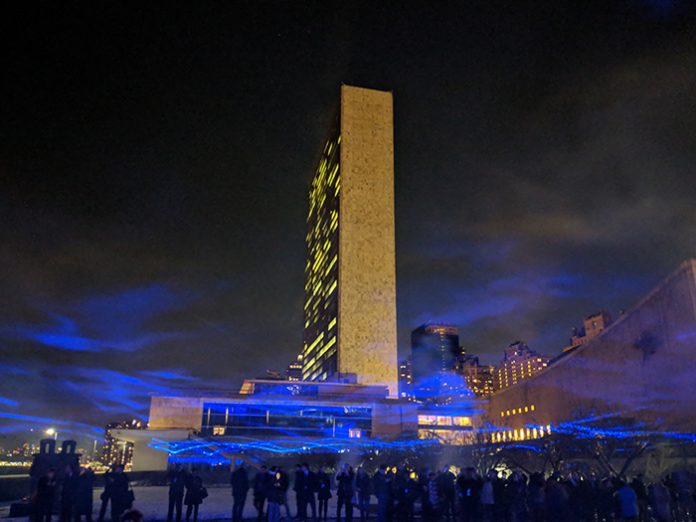 (USA) – The Waterlicht artwork has been installed outside the United Nations, in line with UN Sustainable Development Goals, to raise awareness on global warming and rising water levels.

Waterlicht, which translates to ‘water light’ uses light to create a dream landscape that shows the ‘power and poetry of water’. In line with the UN Sustainable Development Goals, the artwork is intended to raise awareness around rising water levels caused by global warming.

As underlined by the New York Mayor’s Office, climate change is “perhaps the toughest challenge New York City will face in the coming decades”. While Dutch water ambassador Henk Ovink added: “the Sandy’s and Harvey’s of this world will not stop. On the contrary they are the new normal, becoming more extreme year by year.”

With Waterlicht, Roosegaarde responds with a warning against rising water levels, while also providing inspiration towards the future: “Can we build floating cities, how much power can we generate from the movement of water?”

Installed at the North Lawn of the United Nations headquarters, Waterlicht New York mimics the height of hurricane Sandy with wavy lines of light made with the latest LED technology, software and lenses.

The artwork was originally created for the Dutch District Water Board Rijn & IJssel. New site specific series of Waterlicht have been created for Nuit Blanche in Paris, Kings Cross in London, Museumplein in Amsterdam, UNESCO Schokland, the Afsluitdijk, Middelburg and Leeuwarden in the Netherlands.